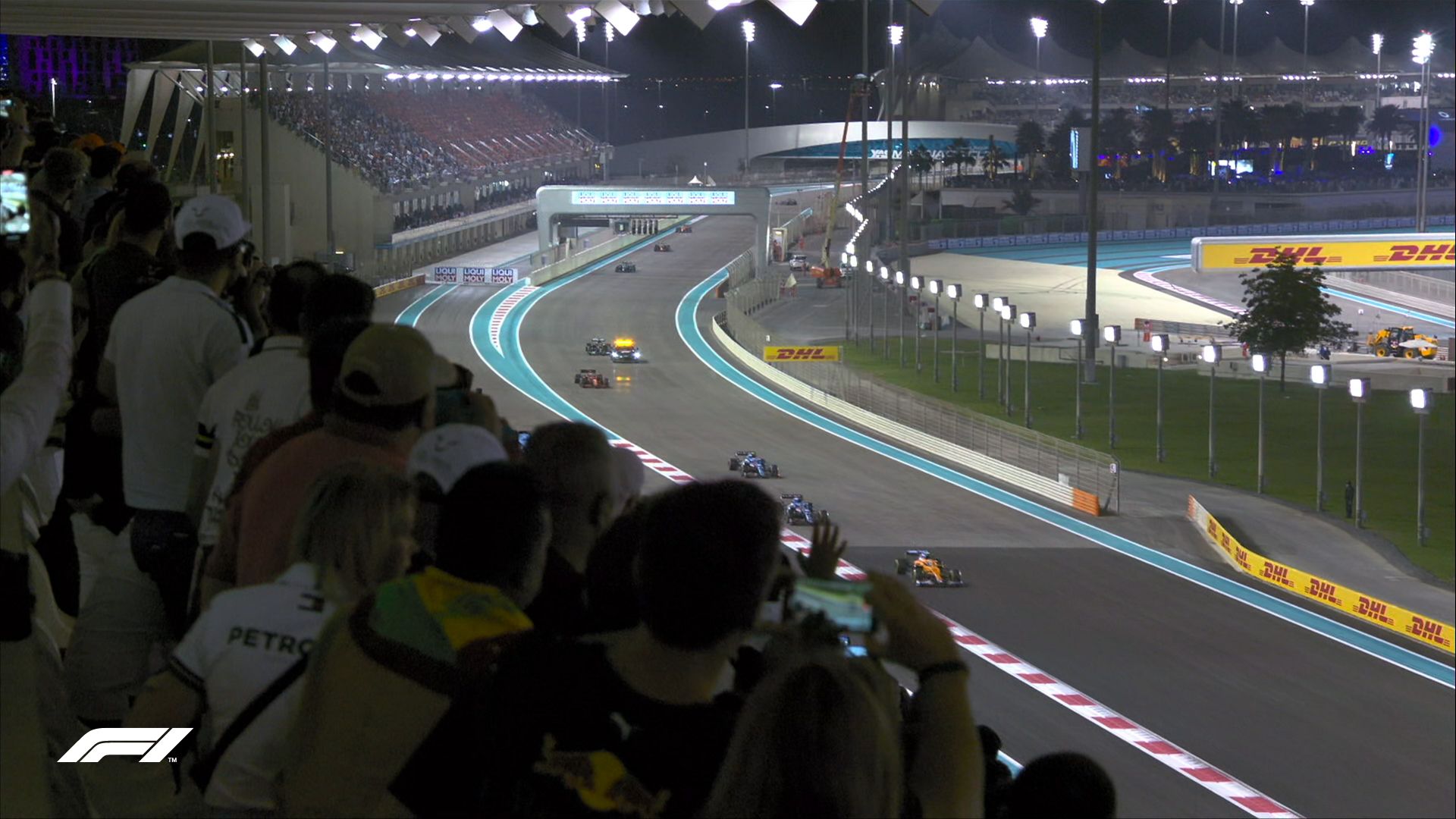 Several F1 drivers were a bit perplexed by how the safety car unlapping was handled in Abu Dhabi GP for the photo finish of one lap.

The crash of Nicholas Latifi’s Williams late in F1 Abu Dhabi GP provided the best opportunity for Red Bull to try a late push on Mercedes as they pitted Max Verstappen for softs, while Lewis Hamilton stayed out on the wrecked hard compound.

At one point, it seemed like the race would end under the safety car and to hurry the process, the FIA Race Director did not signal the lapped cars to unlap themselves. It meant that Hamilton and Verstappen had four cars in between them.

They were Lando Norris, Fernando Alonso, Esteban Ocon and Charles Leclerc. And strangely, the cars of Daniel Ricciardo, Lance Stroll and Mick Schumacher weren’t asked to unlap. Two of them were in front of Carlos Sainz who was third in the net order.

The late call of unlapping of four cars certainly raised questions and some even agreed that it was done for TV where the intention was to give a photo finish in a one-lap F1 sprint to the chequered flag. With Verstappen on fresher tyres, he had the best chance to pass.

Eventually, he did so but not without a fight from Hamilton who did not let it go easily for couple of corners. The race ended with Verstappen winning but after protests from Mercedes, the results were only made certain nearly 4-5 hours later.

Even with that, Mercedes has intended to appeal against the decision of the FIA. A formal application of appeal now has to be done within the timeframe for the case to go forward, with an appeal to International Court of Appeal not ruled out.

While Red Bull did speak to media even after the protest was done, Mercedes have been silent all-through. They have just shared about the intention to appeal with no team photo done on constructors’ win. Both Toto Wolff and Hamilton have not spoken to media.

Hamilton only spoke to Jenson Button after the race, but stuck to congratulating Verstappen and Red Bull along with his team for the titles. The only radio message that was played late on TV was ‘this is getting manipulated, man’ – he said nothing after it.

Here’s what some of the F1 rivals thought including Latifi:

Latifi: “It was a tough race out there today and we were struggling for pace throughout. Towards the end of the Grand Prix, I was racing with Mick Schumacher and was forced slightly wide, but fairly, at Turn Nine. My tyres got dirty from running off track and I subsequently made a small mistake and unfortunately crashed.

“We were just really struggling for grip through the next sequence of corners, and especially where I ended up going off. It was never my intention and I can only apologise for influencing and creating an opportunity. But again, I made a mistake. This obviously wasn’t how I wanted to end our season, so it’s disappointing.”

Sainz: “It was certainly a very strange situation for me. Because I was obviously battling for a podium with Valtteri and some AlphaTauris behind with a medium tyre, while I was on a very used hard. At the beginning I was told they were not going to be allowed to unlap themselves, the people in front of me. Then it was decided to unlap themselves, and some people unlapped themselves.

“But there was still, I think it was an Aston Martin and a McLaren of Ricciardo, between the two leaders and myself. And this I’ve never had before, having to restart the race with these two guys in front of me, and while fighting for a P3. So I do believe it was a strange one, and maybe something to look at because it was very strange to see, and it nearly cost me my podium, to be honest.”

Alonso: “I was not following the race too much but when I unlapped myself, it was two laps to the end and I had Lewis in the front and Max had like four cars behind. So, obviously a surprise now to see the reverse order on that classification but I guess it was an epic race, epic championship to have the two contenders tied on points in the last race and fighting wheel-to-wheel on the last lap of the last race, this is something unbelievable. So, well done to the sport in general and to Max.”

Vettel: “It was a very late call. I think too late, they should have let us pass straight away like other times. And obviously, you have the guys fighting in the front. So you’ve just got to clear the path. I don’t know what it was. For us it was a shame because we didn’t have a race then, because everything was spread out.”

Norris: “I’m not too sure what was said from the FIA, like at first we weren’t allowed to overtake as like the backmarkers, so if that influenced decisions of Mercedes and Lewis and that’s the reason they didn’t do the pit stop but then they definitely suddenly changed their minds. They allowed to let us pass then, that’s where I’m not a bit not so sure. I’ll just say congrats to both drivers Lewis and Max. Of course Max won and congrats to that but in terms of decision like to turn like that, I’m not so sure.”

Leclerc: “What a crazy end to the championship, I mean until the last race in the last lap, it’s unbelievable. But I think, it’s the best that F1 could ask for, I think it’s great to see that and congratulations to Max, he’s been incredible. For me it was a bit weird because I was a bit in the middle of nowhere. We could overtake the leaders I think for just like a lap before restarting, and we were in the middle of nowhere. I was just fighting for the ninth place with Esteban, I think, just in front. But first I was told I would not be able to unlap myself, at the end at the last moment we actually had the opportunity to unlap ourselves. So yeah, it was a bit of a strange one on decision side.”

Ocon: “I think they’ve both done an amazing job but there had to be only one in the end. For sure, Lewis didn’t fight with the same weapon in the end as he didn’t have new tyres, but it was a gamble on both sides and some of those strategies…it hasn’t been a straight fight but it doesn’t take off all the the great drive from Max, so he deserved the win.”

Russell: “This is unacceptable. Max is an absolutely fantastic driver who has had an incredible season and I have nothing but huge respect for him, but what just happened is absolutely unacceptable. I cannot believe what we’ve just seen.”

Ricciardo: “I was confused because I got that message that they won’t overtake. Through my head I thought, ‘that seems okay,’ like I guess, fair, because Lewis had such a lead and Max has newer tyres, in this way he has to cut through a few cars if they’re going to restart the race. Then I saw some cars overtake so I asked, ‘What do I do, do I pass?,’ and then I think Tom said ‘No, you have to stay here.’

“So I’ve literally got front row seats for the last lap. And I’m also on a new soft, or a newer soft, so I was like, ‘Do I pass both of them?’ Nah, just kidding. I’m honestly a bit speechless, I don’t know what to make of that. I really don’t. I need to see how it all came about.”

Bottas: “I haven’t seen anyone yet but I can feel it. Of course we wanted to get both the titles and getting the constructors’ again is huge but at the same time it hurts that Lewis didn’t get the drivers’ because even for me, I feel like I lost the championship because he lost it. I really feel gutted for him because I feel like, he deserved it. He had a great start, great race and then things change like this but that’s the sport. That’s how it goes and sometimes it goes against and sometimes it goes for you.

“But it was not not our day. I’m sure they make the decision for safety. If there’s a car sideways next to a barrier, there were men on the track, so normally you need a safety car. Just unlucky this is mixed emotions like I said, I’m happy for the constructors and really proud but at the same time I feel it for Lewis, give me some more time.”