The F1 Commission met for the final time in 2022 as they discussed various rules and regulations going ahead.

The F1 Commission met for the fourth and the final time in 2022 during the ongoing Abu Dhabi GP weekend in the presence of FIA President Mohammed Ben Sulayem and Stefano Domenicali. They had the team representatives too to discuss various points.

Several points were discussed in the meet, starting from the continued check on the sporting and technical rules going forward. A key point was about the bodywork attachment especially in extreme wet weather conditions to reduce spray.

Work is to continue on the bodywork which can be removed when the weather is stable. They are looking at the wheel arches which will help in visibility. Keeping with the tyres, the unanimous decision was to defer the ruling on tyre blanket removal until July 2023.

Regarding the power unit penalty, the F1 Commission is looking at ways that there is a strict rule against drivers and teams who incur extra elements where in current format, they are not helping on the cost side where there is a general limitation of three.

Moving on the activation of DRS, the commission has decided to trial an early activation from 2023 onward especially in the sprint events. The idea is to activate it one lap earlier and if the trial works in 2023, they will implement in from 2024 onward.

Here’s the pointers in F1 Commission:

Regulatory and judicial process review – The Commission was informed that the FIA is undertaking a comprehensive review of the Sporting Regulations for 2024 as part of its continuous commitment to the evolution and refinement of its regulatory processes. FOM and the teams will be consulted throughout the review, with any resultant changes anticipated to be approved by end of April 2023 following standard FIA Formula 1 Governance. Additionally, the FIA will carry out a general review of its judicial process for 2024.

Wet weather update – Driver feedback has suggested that there has been reduced visibility in extremely wet conditions with this latest generation of cars, which is a key determinant on starting, or needing to suspend sessions. Therefore, the FIA commenced a study to define a package of parts aiming to suppress the spray generated when running in wet conditions. The study focused on the following:

Grid and Power Unit penalties – Possible updates to the penalties relating to Power Unit infringements were discussed by the Commission. It was agreed that the current system is not a strong enough deterrent to teams to make strategic Power Unit changes, and encourages the change of change of more elements than needed once a driver has accumulated more than a certain level of penalty. This ultimately causes higher parts costs and undermines the PU element annual restrictions. This will continue to be discussed at the Sporting and Power Unit Advisory Committees for further analysis and refinement.

Tyre blanket strategy 2023-2025 – The objective of the FIA and FOM remainsto remove tyre blankets for 2024, however following numerous discussions and driver feedback, the Commission decided to delay any final decisions until July 2023, allowing for additional data gathering and testing feedback to fully inform the conclusions.

DRS activation after the start, re-start, or safety car – The Commission approved a proposal to evaluate a method to keep the field closer together and encourage closer racing by bringing the activation of the DRS forward by one lap at the start of a race or Sprint session, or following a safety car re-start. This will be trialled during each Sprint session in 2023 with a view to introducing it for all races in 2024.

Accident damage allowance – The system in place to deal with the impact of accident damage during a Sprint session will be simplified. The allocation of accident damage allowance will be replaced with a fixed amount per team, per event including a Sprint session. The Commission approved the proposal to increase the forfeit allowance amount for each Sprint from $150k to $300k from 2023 onwards. All other Sprint allowances (minor damages pursuant to Art.4.1(l)(ii) and material damages pursuant to Art.4.1(l)(iii)) will be removed.

“Formula 1 is clearly in a very strong position at the moment, and this growth and prosperity is thanks in no small part to the hard work of all the FIA staff, officials and volunteers and to Stefano Domenicali and his organisation,” said Sulayem.

“I would like to thank them all, and of course also the Competitors represented here at the Formula 1 Commission who have put on a fantastic show this year. Based on recent races, I think we can expect another very exciting year in 2023, and we will continue to make strides to improve the sport across all areas and ensure that the growth we have seen this year continues.”

At the same time, Domenicali added: “Formula 1 has had an incredible season and continues to grow around the world. That would not be possible without the work of everyone involved at the Commission level and all their teams. We are all working hard together to continuously improve the sport for our fans and the President and I want to continue to maximise the best outcomes for the sport so that 2023 can be an even better year for Formula 1.”

Formula 1 is delighted to announce the launch of the F1 Academy, an all-female driver category which aims to develop and prepare young female drivers to progress to higher levels of competition including W Series, Formula 3, Formula 2 and Formula 1.

F1 Academy will begin racing in 2023 and will consist of five teams, which will be run by strong and experienced current F2 and F3 teams, each entering 3 cars to make up a 15-car grid. The inaugural season will comprise seven events of 3 races each, amounting to a total of 21 races, plus fifteen days of official testing. The 2023 calendar will be revealed in due course and is likely to include one Formula 1 event weekend.

The car used for the series will be a Tatuus T421 chassis. The turbo charged engine, delivering 165 horsepower, will be supplied by Autotecnica, and Formula 1’s Global Partner, Pirelli, will provide the tyres, as they already do in F3, F2 and F1. The series will be managed by Bruno Michel (CEO of Formula Motorsport Limited), who has the knowledge and experience of running successful junior categories for a reasonable budget and helping drivers to develop.

Most of the time, finding adequate funding for racing has been very challenging for female drivers. Therefore, Formula 1 will subsidise each car with a budget of €150,000 (€2.25m in total) and will require the drivers to cover the same amount, which represents a fraction of the usual costs in a comparable series. The teams will provide the rest of the budget.

The F1 Academy has been created to maximise the opportunity and potential of young female drivers to reach the highest level in motorsport. It will provide young talent currently in go-karting or other junior categories with access to the fundamental level of experience needed before racing in F3 and joining the pyramid to Formula 1.

During assessments of the barriers young female drivers face with entering the F1 pyramid, it became clear that they do not have the same amount of experience as their male counterparts at the same age. The goal is to fill this gap and offer them access to more track time, racing and testing. They will also grow by working with professional teams, who are renowned in motorsport for nurturing young drivers, and who will help them develop the crucial technical, physical and mental preparations.

Formula 1 wants to ensure aspiring female drivers have the best opportunities to reach their potential with an important first step of getting into Formula 3 and progressing through the ranks. The W Series continues to provide a great platform for drivers and the F1 Academy is intended to add an extra route for the next generation of young female drivers, who will race in an environment that will allow them to gain fundamental experience thanks to a great amount of track time.

Stefano Domenicali, President and CEO of Formula 1, said: “Everyone should have the opportunity to follow their dreams and achieve their potential and Formula 1 wants to ensure we are doing everything we can to create greater diversity and routes into this incredible sport. That is why I am delighted to announce the F1 Academy that will give young female drivers the best chance to fulfil their ambitions through a comprehensive programme that supports their racing careers and gives them everything they need to move into F3 and hopefully to F2 and then the pinnacle of Formula 1. The more opportunity there is the better and this is designed to provide another route for the drivers to succeed.”

Ellen Jones, Head of Sustainability at Formula 1, said: “In 2019 we launched our sustainability strategy which included the commitment to build a more diverse and inclusive sport by removing barriers, nurturing talent, and inspiring change. Over the past few years, we have been making progress within our own operations and in the classroom through programmes such as internships and F1 Engineering Scholarships. Today’s announcement marks the next step in inspiring talent behind the visor to help ensure young female drivers get the very best opportunity to begin their professional motorsport career and climb the ladder to the top.”

Bruno Michel, General Manager of the F1 Academy, said: “I am very excited to launch this new category. Diversity is extremely important in motorsport, and with the F1 Academy we will prove that female drivers have what it takes to compete at high levels. I am absolutely convinced that if young women are given the same amount of experience as any other driver, they can successfully make their way through the pyramid. Our goal is to see female drivers on the F3 grid in the next two to three years, and for them to quickly challenge for points and podiums. The aim is to increase the field in the near future, because we hope that this category will inspire more young girls to compete in motorsport at the highest of levels.” 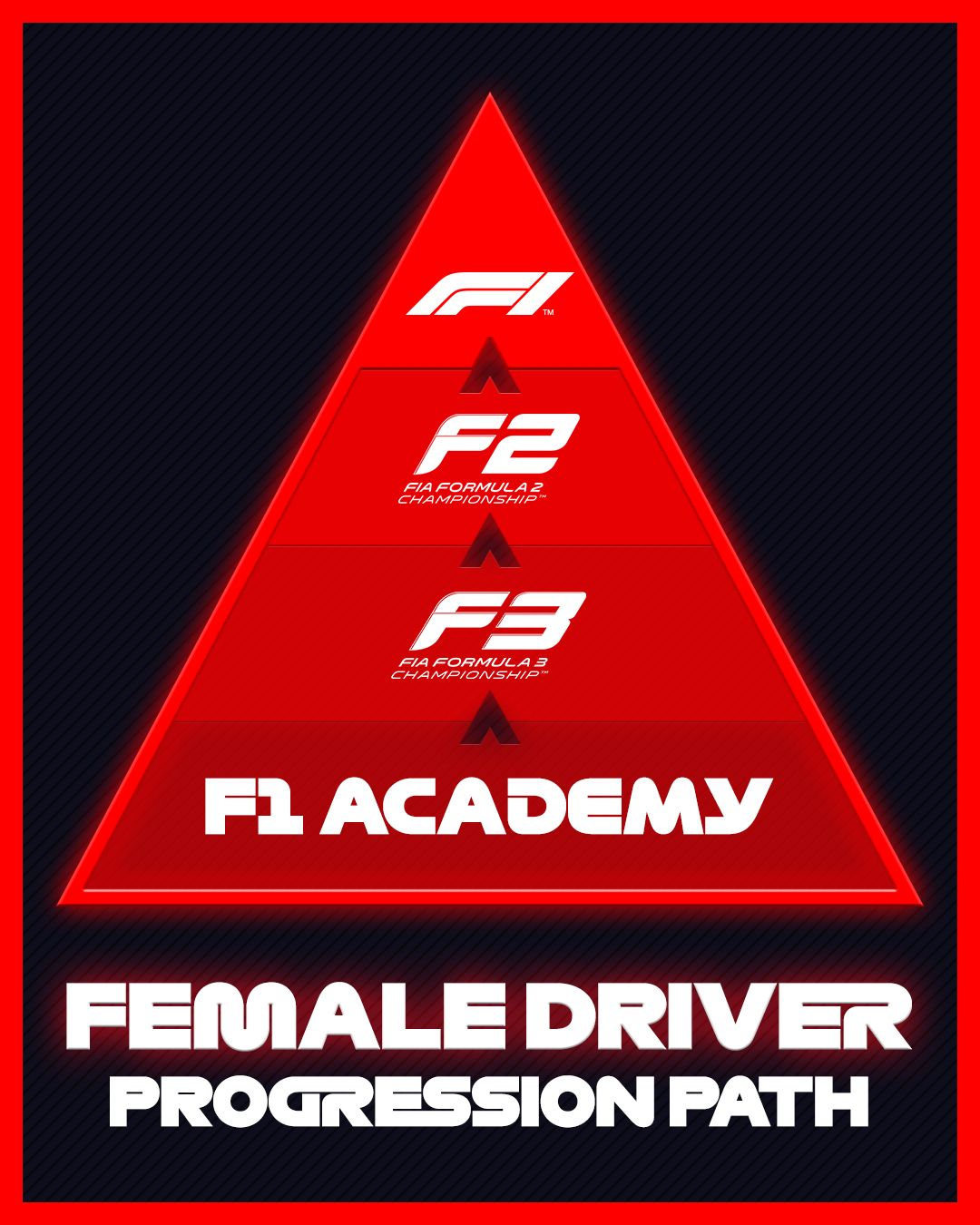 Here’s drivers get together in Abu Dhabi