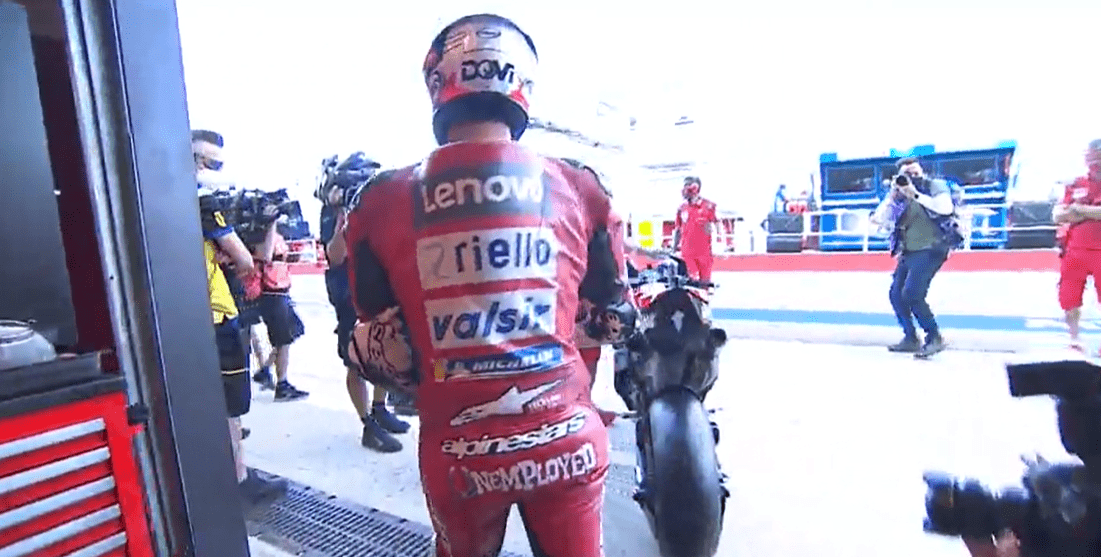 Andrea Dovizioso revealed the reason for putting ‘Unemployed’ on the back of his race suit as DTM shared about the series’ future programme.

Ducati’s Dovizioso surprised everyone by putting ‘Unemployed’ sticker on the back of his race suit at the start of the Emilia Romagna MotoGP weekend at Misano. It was hilarious, indeed, as the Italian is out of contract beyond the 2020 season.

It felt like, he was taking in good spirits with no Plan B. However, on Saturday, he clarified the real reason for carrying the message, which was a bet he lost against his friends. They were confident that Dovizioso will lead the MotoGP standings after San Marino GP.

It is what happened as Dovizioso took over from Petronas SRT’s Fabio Quatararo by six points and as a result, he had no choice but to carry the message. “I was forced to put that because I bet with my friends,” said the Italian to MotoGP feed.

“They said to me ‘if you are first in the championship after Misano 1, you have to put that on for the second race’. And it happened! So I had to put it on. If you bet something with your friends, you can’t go back. So, I was forced to from my friends.”

It will be hard to keep it for Dovizioso post the second Misano race as he starts 10th, while Quartararo is third. The MotoGP race could still go either way but Ducati doesn’t seem to have the same pace as the Yamaha rider, especially the factory Italian manufacturer’s bikes.

Following the decision of Audi to pull the plug on its DTM programme at the end of the 2020 season, the series will switch to become an independent professional GT-based championship from 2021 onward, with the support of two key manufacturers.

In a press brief on Saturday, former F1 racer Gerhard Berger revealed that Audi and BMW have agreed to help in setting-up the new series, away from the ITR ambit. The full details will be released at a later stage with the Austrian taking over the programme.

“During the past months, we have been discussing various strategic options for the future of the DTM in complex negotiations,” said Berger. “In the past days, I have had very constructive talks with Audi and BMW. Both manufacturers enable for me to take over the full responsibility for the future of a race series in which, for the moment, primarily GT cars will be running.

“That Audi and BMW are supporting a scenario for continuation is great news for all the employees and motorsport fans. In the future, no longer the factories, but independent professional privateer teams will be competing for victories on the platform. For me, it was important that both manufacturers commit to this concept, in order for the GT models of these brands to race here as well. I have this commitment.

“Therefore, I express my sincere thanks to the manufacturers: with their decision, they not only have contributed essentially to securing the jobs at the ITR and the DTM partners, but also enable fans and supporters to continue to enjoy top-level motorsport. Now, I am looking forward to working on a sustainable strategy for the future, together with our strong partners like Sat.1, one that will thrill the fans.”