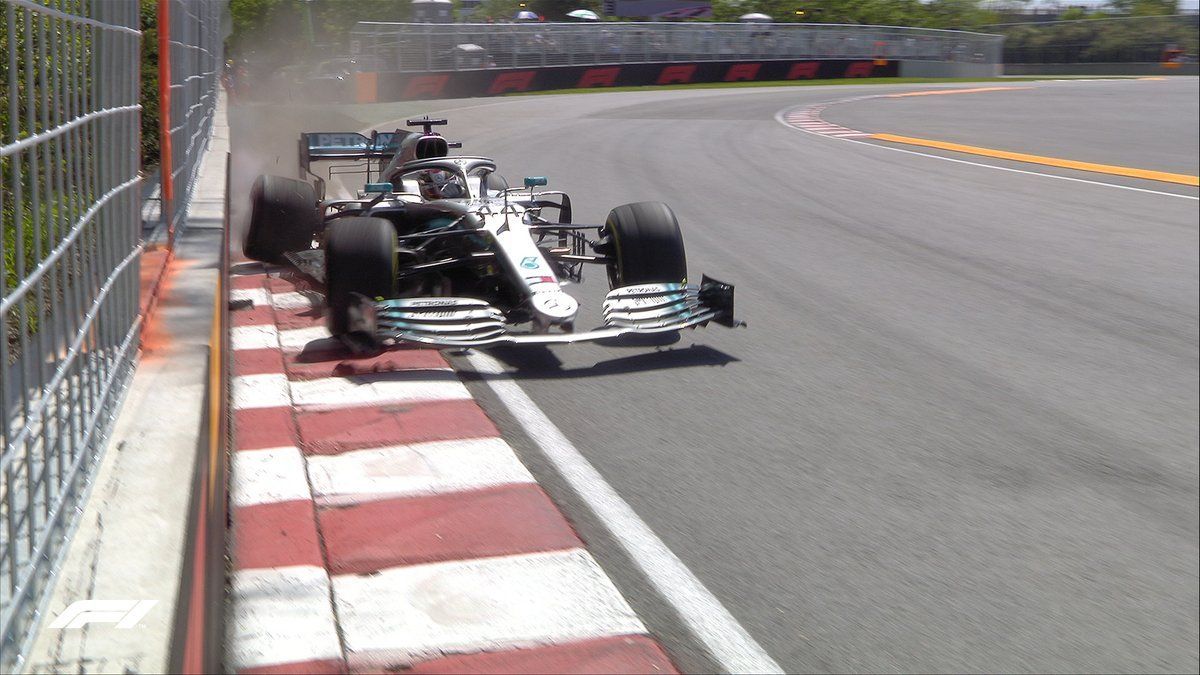 The Friday in F1 Canadian GP had plenty of talk with Mercedes’ Lewis Hamilton crashing out while Red Bull Racing duo nearly hit each other and a close midfield pack.

It was a rare mistake from reigning F1 champion Hamilton in FP2 of Canadian GP at Montreal as the British racer tipped the wall at Turn 9 and lost most of the session, as he now has to depend on Valtteri Bottas’ data to make the changes for Saturday and Sunday.

Mercedes decided to change the rear end of Hamilton’s car after the suspension damage in the hit. For Hamilton though, all he could do is apologise for the incident – and as he admitted himself, its been a while that he had to sit out a session.

“The morning session went smoothly, the track was very dirty in the beginning, but we’re all in the same boat,” said Hamilton. “I made a mistake in FP2 and damaged the car. The boys tried really hard to fix it, but there wasn’t enough time.

“I don’t remember the last time I missed a whole session before. It’s definitely not great to watch the session from the garage; it feels like sitting in the headmaster’s office, wishing to be back in class. It was an innocent mistake.

“I was doing multiple laps on the medium tyre and was really trying to find the limit. Obviously I went slightly over, I had a big snap out of Turn 9 and was drifting for a long time, hoping I wouldn’t hit the wall. But these things happen.

“You just have to put it behind straight away you and get back on the horse. Luckily Valtteri had a good session today, so there’ll be a lot of analysis from that. The boys will do a great job fixing the car tonight and we’ll come back ready for a better day on Saturday.”

While Bottas had a good outing but he felt the changes Mercedes did for FP2 made the car a bit difficult to drive even though it was faster. Over at Ferrari, it was a smooth day for both Charles Leclerc and Sebastian Vettel with the former looking in a better shape.

Even though they set the pace in FP2, both agreed that the result shouldn’t taken as to be the same case on Saturday as Mercedes certainly looked quicker with Red Bull chipping in too. “We’re not the fastest,” declared Vettel.

“I know that in terms of results, if you look at the one-lap performance, it looks maybe like this afternoon, but I think there’s still quite a reasonable gap to Mercedes. We’ll see what happens in qualifying and then the strategy that everybody picks for the race.

“But the tyres didn’t last very long, the very soft compound. Overall, I think it was not so bad, but we certainly need to improve if we want to put the car in a very good position for Sunday’s race.” The third wheel, Red Bull, had a mixed run in the end.

While Pierre Gasly got his runs done but Max Verstappen couldn’t after a near hit with his teammate. The Frenchman was trying to move away at the last moment at the back straight and final few corners but it was too late as Verstappen hit the ‘Wall of Champions’.

“At the moment I seem to be lacking a bit of pace, so we need to analyse everything and come up with some solutions for qualifying,” said Gasly. “We had high tyre degradation but maybe that will make the race interesting on Sunday.

“Other teams were struggling with the tyres [too], so we are in the same boat. I didn’t see exactly what happened with Max, I was preparing my lap and starting a new push lap, when they told me he was coming so I tried to push and be out of his way.”

The Dutchman, though, shrugged off the incident and talked more about the car’s pace which he reckons looks to be in a good shape. The fight behind is the one to watch as there was a real mix of cars inside the Top 10 in both FP1 and FP2.

McLaren was common to feature in it along with Haas, Renault and Racing Point – even though it wasn’t with both cars in some cases. The Toro Rosso drivers were out of it while Alfa Romeo Racing’s Kimi Raikkonen looked good in FP1 but not in FP2.

McLaren’s Carlos Sainz did well eventually to be fourth in FP2 but the Spaniard played down the significance as he said the team were evaluating new parts all-through the session. “We can be pretty happy with Friday,” said Sainz.

“The run plan was ambitious, doing a lot of out-ins, getting in a lot of tests for the aerodynamicists, a lot of components back-to-back and trying to find the right compromise. In that sense, I think we’re working in the right direction.

“It’s good to have new parts to try in search of performance. I felt comfortable with the car from the morning session and that obviously helped to put together a decent lap and to have good pace on the long run. That was encouraging.

“But it is only practice, so we need to keep our heads down and work hard to see if we can confirm the pace of Friday in qualifying.” Teammate Lando Norris learned the track quick but admitted that he couldn’t extract anymore pace to get inside the Top 10.

With Haas too, it was the case of split performance as Kevin Magnussen was comfortable in the high midfield pack but Romain Grosjean struggled behind. The Frenchman faced issues with the rear end, while the Dane had no complaints.

At Renault and Racing Point, it was a much better Friday than they have had in recent times. All the four drivers managed solid running, especially in FP2 to be inside the Top 10. Nico Hulkenberg only had concerns for graining on the soft compound.

The Toro Rosso duo had slight grip issues which hindered their performance runs. Daniil Kvyat thought, even a small issue is enough to put them outside the Top 10 with the midfield being so tight but was confident to get it better for Saturday.

For Alfa Romeo, Raikkonen said the changes they did in FP2 did not work in their favour after running well in FP1. At the same time, Antonio Giovinazzi’s plan was again cut after his incident in FP1 at Turn 1, which resulted in a change of gearbox.