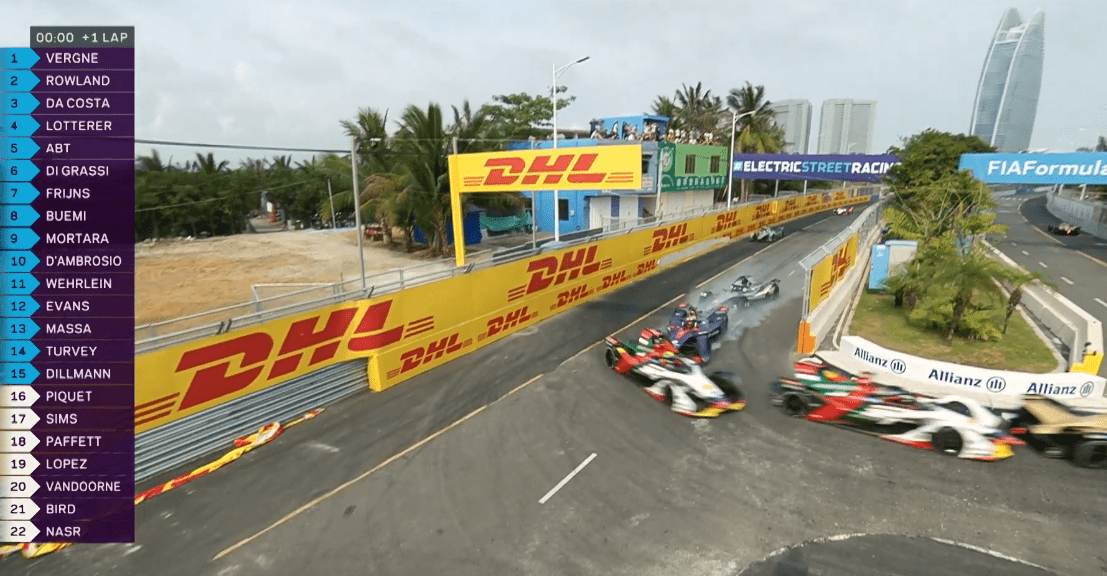 Nissan e.Dams’ Sebastien Buemi was handed a penalty for the clash in FIA Formula E Championship’s Sanya ePrix as Audi’s Lucas di Grassi and Envision Virgin’s Robin Frijns hit out at each other.

Following a disqualification of Buemi from the qualifying results, the Swiss driver had to start from the pitlane in the Sanya Formula E race, as his Nissan teammate Oliver Rowland started from pole position alongside DS Techeetah’s Jean-Eric Vergne.

He made huge progress as he was already up to 10th when the race was red flagged to recover the stricken BMW Andretti of Alexander Sims. At re-start, he then made a quick work of Mahindra’s Jerome D’Ambrosio and Venturi’s Edoardo Mortara to be seventh.

With the cars closely stacked up on the penultimate lap, carrying more speed into the U-Turn chicane, Buemi braked hard but couldn’t stop his car as he clouted the back of Frijns, who then collected di Grassi in the corner – while they were sixth, seventh and eighth.

The two had a race long battle before that with Frijns getting the better of di Grassi initially but post the red flag, the Brazilian came back and took track position. Their race ended in the incident but Buemi continued on to finish in sixth, with Rowland in second.

Post-race, however, the Swiss driver was handed a 10-second time penalty for causing a collision which dropped him to eighth and promoted D’Ambrosio to sixth and Mahindra teammate Pascal Wehrlein to seventh.

“I hope you get a penalty. It’s only nocked my back three places [in the standings] but it meant I lost eight points. I don’t care who’s fault it is – I think it’s Robin and Buemi’s fault – they crashed into each other and they crashed into me.

“I feel sh*t [about the race]. Next time, I’ll get away from Robin. There was nothing I could do to avoid that.” At the same time, Frijns was equally frustrated after being hit by Buemi as he defended himself against the words from di Grassi.

“How can I crash into Buemi if he’s behind me? It wasn’t my fault! You should be honest with yourself and say that,” he said. “Buemi hit me – end of f*cking story. I closed the door on Buemi, braked quite early to make the corner.

“And then I got a huge hit from behind, my wheels got sent into the air and I hit…I don’t know I could have missed the contact. I don’t see how I could be blamed for this.” Zero points for di Grassi hit hard in the drivers’ title fight where he lost out considerably.

Had he scored the eight points, he would be with 60 points and third in standings and just two away from leader da Costa but instead, he is fifth with 52 which is same points as Mortara, who was also given a 16-second time penalty, dropping him to 13th.

Da Costa still leads with 62 points but D’Ambrosio is just one point behind while Vergne and Sam Bird are third and fourth, tied on 54 points. The changed results had a bigger impact on the teams’ championship.

Mahindra has joined Envision Virgin at the top with 97 points apiece but the British-Chinese team heads the Indian outfit due to an extra podium finish, while Audi is third with 96 points and DS Techeetah is fourth with 95.