Home F1 Bottas to ask why no warning for piece, Vettel felt no effect... 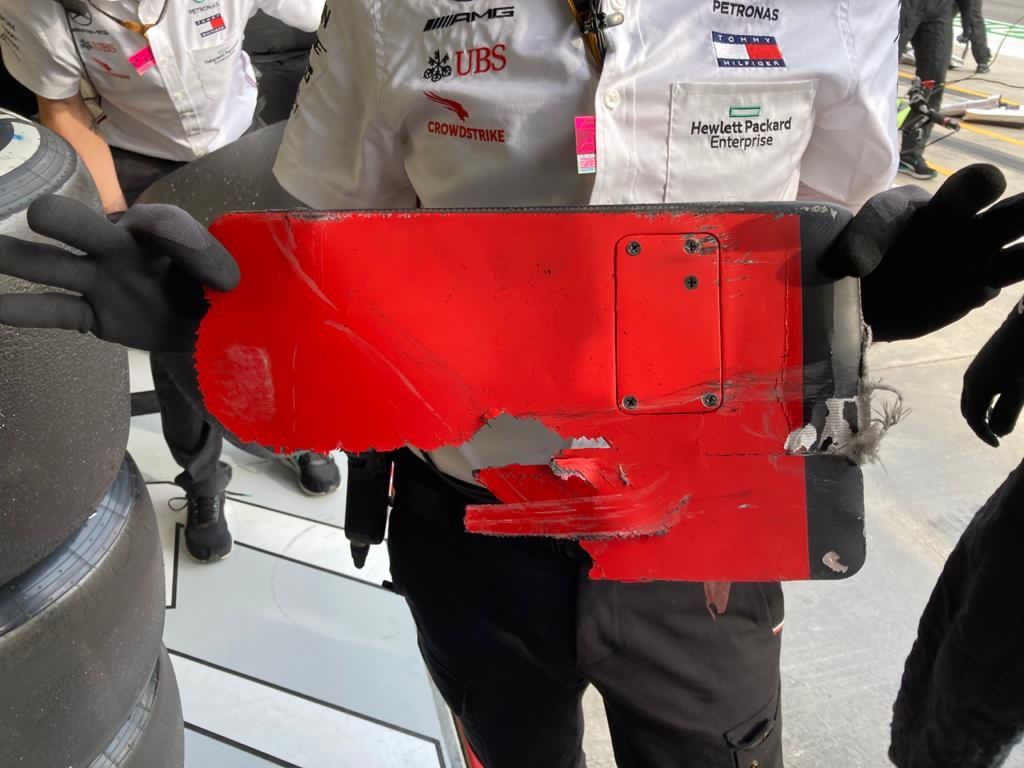 Valtteri Bottas couldn’t avoid debris from Sebastian Vettel in F1 Emilia Romagna GP as the Finn wants to understand why there wasn’t a yellow flag to collect such piece.

Though Vettel and Bottas had wholly different races, it would be the German that decided the fate of the latter in Sunday’s F1 Emilia Romagna GP at Imola, a piece of debris from his Ferrari having become lodged underneath the Finn’s Mercedes.

The part came from Vettel’s front-wing right endplate, which he lost in a tangle with Haas’ Kevin Magnussen on Lap 1. The Dane was spun around as Bottas then ran over it on Lap 2 as it caused aero damage to the left-underside side of his Mercedes F1 car.

“Valtteri had a, I think it was a Ferrari piece, of a big size, stuck underneath his car,” noted Mercedes F1 chief Toto Wolff after the grand prix. “It was debris his overran on lap two. He couldn’t avoid it.” Consistent with his superior’s account of the story, Bottas added:

“Actually it was lap two, out of Turn Seven, like, on the racing line, I didn’t have enough time to react I saw a big piece of carbon, so I decided the only chance… what I had to do, what I had time to do was aim at least how to hit it.

“I decided to go straight over it instead of hitting one of the tyres and possibly getting a puncture but, unluckily, it got stuck on the floor – under the floor – and apparently it was like 50 points of downforce which, in lap time, is quite a big chunk. How it affected me, I would say mainly in high-speed corners.

“I could feel that the car was sliding a bit and in some brakings it was a bit unpredictable, so sometimes I would lock the wheels and sometimes it would stop pretty quickly. It was not really consistent, the downforce I had in the car,” summed up Bottas, who said that the engineers did tell him about possible debris and before he could react, he was already over it.

The scrap carbon was removed from his car in a pit stop conducted under the late-race safety car, long after his race lead was stripped from him by his teammate Lewis Hamilton, who performed an overcut on the Finn in the first round of stops.

It was also after Max Verstappen of Red Bull – who would later cause the safety car with a dramatic tyre failure – made his way past for second. With the Dutchman subsequently cleared as a result of his failure, Bottas finished second.

“It made it really tricky and I could see I just didn’t quite have the pace and Max was putting a lot of pressure and in the end he got through because I had to push over my limits to try and maintain the position,” said Bottas.

“I had a lock-up and that was it. Not my day. I didn’t have a chance with that debris in the car to fight for the win, unfortunately. But at least we could secure a 1-2, which is a perfect way to secure the seventh title for the team in a row.”

Down the road, Vettel had a compromised race in his own right, with a poor strategic choice and a poorer yet pit stop meaning he could only manage 12th. The German was upset with such a result but felt surprised that the car hung on well despite the endplate missing from his front-wing.

“I had a poor exit at Turn 6 and then he didn’t really give me enough space, I wanted to avoid him and obviously we touched,” said Vettel to TV media. “It was a shame but the car felt okay even with the loss of front wing. I think the race today was a bit better for a couple of reasons, but obviously the poor pit stop didn’t help us. With the SC at the end we could have capitalised. Our tyres were very fresh but we couldn’t.”

Here’s shot of Sebastian Vettel without the endplate: