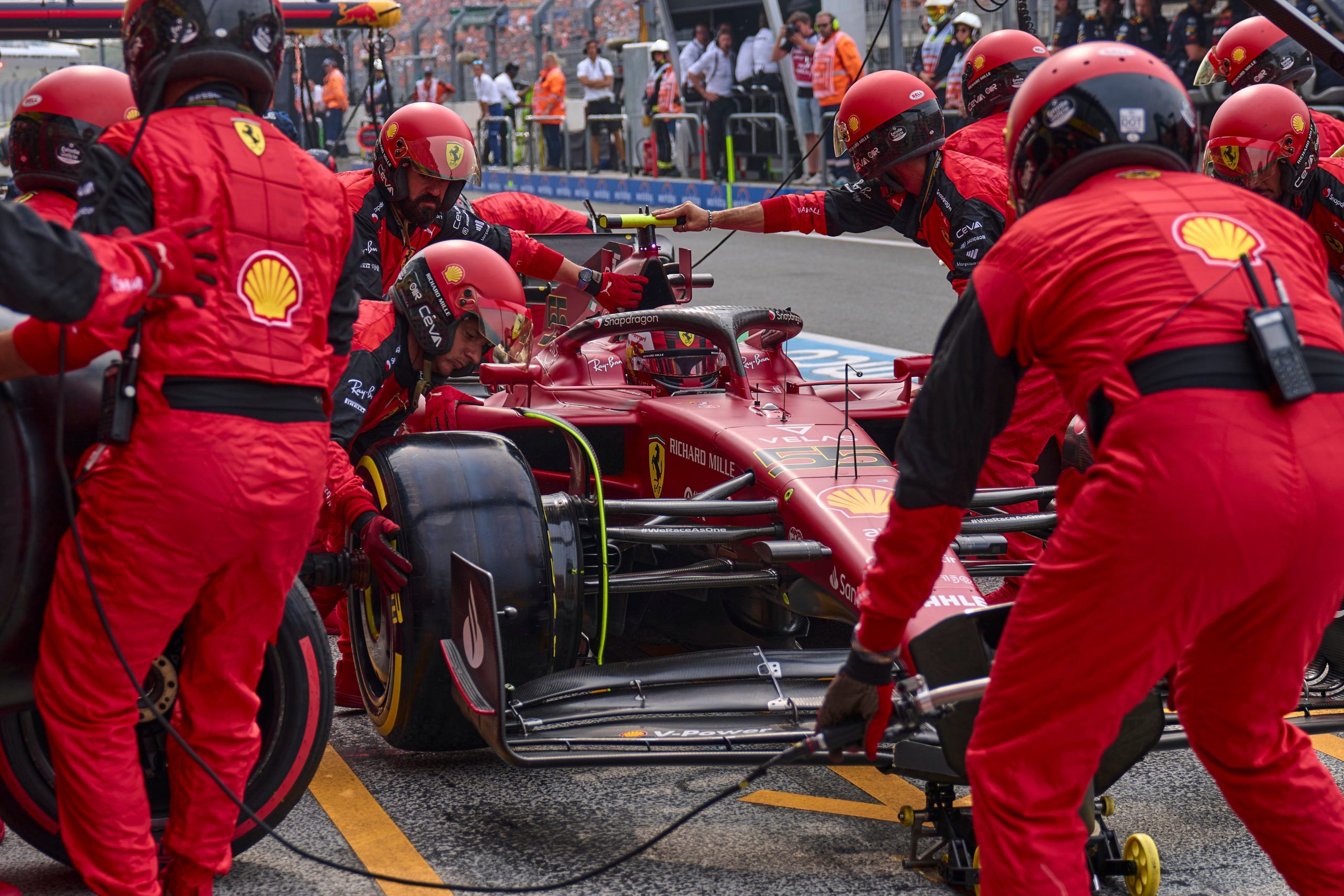 Mattia Binotto talks about the two pit stop situation in F1 Dutch GP as he and Carlos Sainz calls out the harsh penalty for the second one.

The pit area and actual pit stop is a stressful are and part of any motorsport event and is not just confined to F1. Some pit areas are quite big and some are not and regardless of this there are always tight confines. Over the years, there have been incidents, some significant and some even tragic.

The F1 Dutch GP saw Sainz having to take evasive action when exiting his pit box to avoid hitting a McLaren mechanic and he veered into the path of Fernando Alonso and as a result he picked up a penalty for his actions but both he and Binotto felt it was harsh on the stewards to hand him a penalty.

Sainz felt he kind of saved someone’s life there. The tight pitlane certainly made it difficult but McLaren chief Andreas Seidl felt it is part of the challenge. Binotto also clarified on the delayed decision with regards to the first pit stop which cost him time. The Italian further responded to Nico Rosberg’s comments who indicated that F2/F3 teams may perform better at pit stops than Ferrari and that they need big changes.

Binotto: “On the first one stop what we did was we knew that Lewis was preparing himself for a pit stop that could have undercut of ourselves. We tried to react simply to stay ahead of him which was the best way to keep track position, because we knew Lewis was very fast in the first stint of the race. When we saw the pit crew of Mercedes in pitlane we called our driver to pit but that was when he was in the last corner and it was too late for the mechanics to be ready. It was too late as a call based on our judgement.”

Binotto: “The five second penalty cost quite a lot to Carlos. Honestly, I feel that the decision of the FIA, of the stewards, has been very, very harsh. The reason is when he came in, McLaren was passing through and we held Carlos in the pit position because we knew it would have be unsafe to release at the time. We waited to have the right space and we believe that the space was there with the Alpine coming, so that’s why we released him. What happened after is that he has to slow down almost to stop, because the pit crew of McLaren was going around the car and in order to be safe with the mechanics he almost stopped – having as well an anti-stall coming in, losing him time, and then it was too late. But the release itself was not unsafe. The release was safe, the way that Carlos acted was safe, that’s why it seems that the overall decision was harsh.”

Binotto: “First, I think it is so easy to speak when you are outside of the paddock. It is easy to criticise. But we will not change people: that is my answer to Rosberg. We have got great people and it has been proven that what is more important in sport is stability and that we make sure we are improving day-by-day and race-by-race. We have got great people in the team and I have no doubt on that. It takes years and experience for all teams to be at the front, and I think there is no reason why it should be different for ourselves. Yes it was a very late call to react to Lewis with Carlos. It was too late a call. But I know as he should know as well because he is an experienced driver, that it is a lot easier to address those type of problems rather than the performance. The performance is what counts the most today in my view.”

Sainz: “I saw it in the car. By the time they released me, it was clearly safe with Fernando. But then I had to hit the brakes to not hit a McLaren mechanic that ran into my exit line and it was this braking that generated the unsafe release, if you can call it ‘unsafe’. I was clearly frustrated by it, because I thought I had saved someone’s life and not generated a dangerous situation.”

His radio comments: “It was not unsafe, I just saw on the cameras it’s not unsafe. The other car exaggerated the braking. He saw more exiting clearly. I’ve seen it on the cameras. If they give me a penalty for that it’s totally fake.”

Seidl: “It is a tight pit lane which also brings some challenges with it. But at the same time I think probably all of the teams managed well today. Of course, let’s say this brings a bit of uncertainty into the game, this tight pit lane, because you might end up having pit stops that are definitely a bit slower than other cars that, for example, are also lucky and can do a pit stop without anyone around. But it’s part of the challenge – it’s not just this track like this.”

Here’s what happened in the pit stop with Carlos Sainz:  https://www.formula1.com/en/latest/video.2022-dutch-grand-prix-ferrari-scramble-for-tyres-in-botched-sainz-pit-stop-branded-a-mess-by-team-boss-binotto.1743048052333006776.html

Here’s Lewis Hamilton on his frustrations