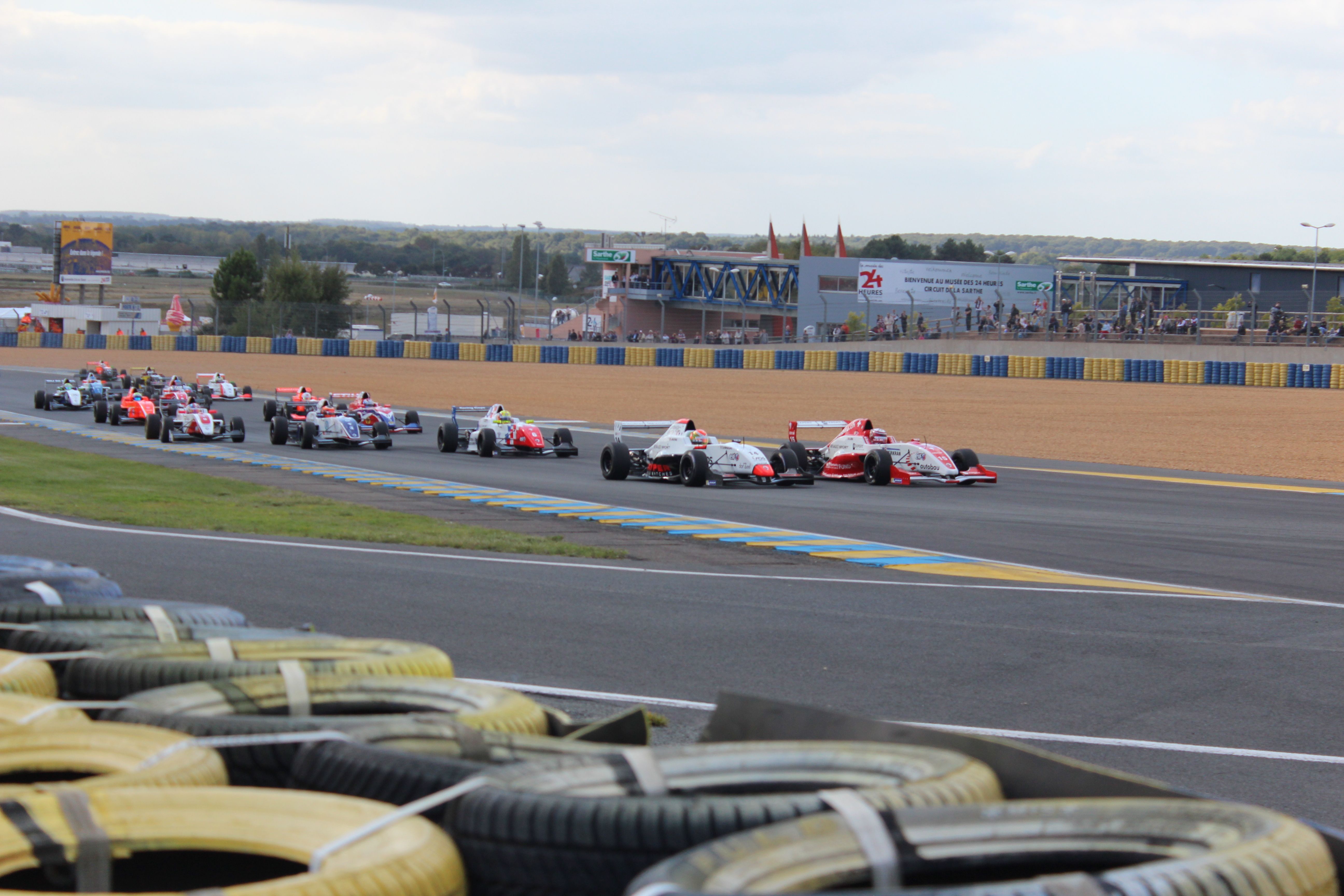 Winner of race two of the Eurocup Formula Renault 2.0 at the Nürburgring, Ben Barnicoat (Fortec Motorsports) claimed his second consecutive victory on Saturday at Circuit Bugatti Le Mans. The Racing Steps Foundation protégé was an opportunist during the opening lap to get the better of the Josef Kaufmann Racing duo of Kevin Jörg and Louis Delétraz, who had locked out row one. For the first time on the podium since Budapest, Louis Delétraz conserves his lead in the general classification by two points from his team mate and compatriot. Valentin Hasse-Clot (Fortec Motorsports) was the highest place rookie in ninth place.

With the Josef Kaufmann Racing drivers in a duel at the first corner, Ben Barnicoat made the most of it to take the lead ahead of Kevin Jörg and Louis Delétraz, who were battling with Jack Aitken and Ukyo Sasahara (ART Junior Team). Further back in the field, Harrison Scott dropped several positions while Thiago Vivacqua (JD Motorsport) spun out.

While the gap between Ben Barnicoat and Kevin Jörg settled in at a second, Louis Delétraz had to cope with the pressure coming from Jack Aitken and Ukyo Sasahara. Behind them, the duel between Dennis Olsen (Manor MP Motorsport) and Anthoine Hubert (Tech 1 Racing) allowed Jake Hughes (Koiranen GP) to close in after he started the race from row seven. But the Englishman’s race came to an end on lap 12 with broken suspension.

Ben Barnicoat : “It is absolutely fantastic to win again. At the Nürburgring, I said that my goal was to win as many races as possible and I have won two of the last three ! In qualifying, Kevin was a little too fast, but I managed to get a good start. I was careful ; I got on the brakes early at the first turn, but I got myself between Louis and Kevin, who went wide out of turn six. I then had to be as consistent as possible and despite a few mistakes, I was able to create a comfortable gap and I am thrilled to have given Fortec a second victory today after Oliver’s success.”

Kevin Jörg : “I was very quick in qualifying, but I couldn’t take advantage of my pole position because I went large coming out of turn six. After that, I attacked hard, but Ben had good pace. The important thing is that I can close the gap to Louis, which is what I did. It is very close at the top and I am looking forward to tomorrow!”

Louis Delétraz : “After two difficult weekends where we had the pace, but where I made mistakes at Silverstone, and didn’t have any luck at the Nürburgring, I am thrilled to be back on the podium. I was quite pleased to set best time in my qualifying group, but then I wanted to avoid contact with Kevin at the first corner. Ben surprised us, and I wasn’t able to match his pace. We must work to find the solution for tomorrow.”