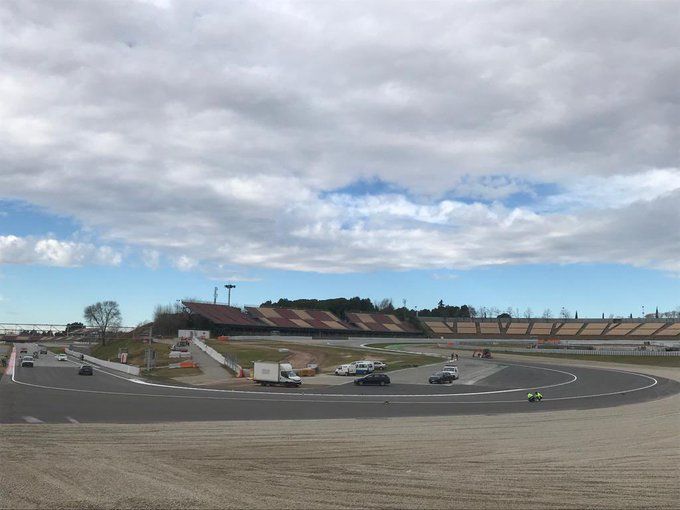 The Circuit de Catalunya-Barcelona has shared image of the new look Turn 10, as McLaren announced a contract extension with CNBC, while Sauber did so with Singha Motorsport for the 2021 F1 season.

The work to revamp Turn 10 at Circuit de Catalunya-Barcelona has seemingly finished after they shared an image of the same on its social media. The work has been for several weeks now as they wish to help increase the circuit’s safety, for both F1 and MotoGP races.

The decision was taken in consultation with the FIA and FIM, to alter Turn 10, turning it into a hairpin-like corner. The hope is that the corner will limit crashes, whether in F1 and or MotoGP. They have retained the old-school run-off with marbles instead of plain cement.

Here’s how the work underwent as shared by Circuit de Catalunya-Barcelona:

We have started with the earthwork in the current run-off area. ⛰ pic.twitter.com/f6bwI4SBW3

This week we have started the resurfacing of the new Turn 10. 💪

We have applied two tarmac layers and the third and last one will be applied next week! 👨‍🏭 pic.twitter.com/n7JYaEDwVa

A new layout is coming! 😉 pic.twitter.com/Ol16IM6E7K

Staying on F1 news, McLaren has extended its partnership with CNBC – which started in 2018 – for 2021 and beyond after signing a multi-year contract. They will work closely on several B2B engagement programme, which are set to be launched later this year.

The CNBC logo will appear on both Daniel Ricciardo and Lando Norris’ race suits, while it will also feature on the MCL35M. Upon the announcement, Mark Waller, Chief Commercial Officer, McLaren Racing said, said: “Since 2018, CNBC has been a valued partner of our team and we have collaborated with real success to reinforce the power of the CNBC and McLaren brands across the global business and investor network.

“After a successful two years, we are delighted to continue to create and amplify content and commercial activity together globally through their world-class network.” And, John Casey, President and Managing Director, CNBC International, added:

“We are delighted to see this partnership with McLaren go from strength to strength. This partnership is built on our shared passion for excellence and leading in our respective fields. We’re looking forward to continuing our journey with the team for what’s set to be an extremely exciting season ahead.”

Like McLaren, even Sauber has extended its partnership with Singha Corporation for 2021 F1 season, having joined hands in 2019. The logo of the brewery company will feature on Antonio Giovinazzi and Kimi Raikkonen’s suits, as well as on C41 car.

Upon the announcement, Voravud Bhirombhakdi, Senior Executive Vice President, Boon Rawd Brewery said: “It is wonderful to continue our close relationship with Sauber Motorsport. Having been involved in Formula One since 2010, we can truly say we have found our home with Alfa Romeo Racing ORLEN: just like our company, which originates from a family business, Sauber very much feels like a big family and we are proud to be part of it.”

At the same time, Frederic Vasseur, Team Principal Alfa Romeo Racing ORLEN and CEO Sauber Motorsport AG, added: “In the fast-changing world of Formula One, it’s a very good sign to see a partnership of this kind stretch into its third year. Singha Corporation has been a true friend of our team since their arrival and we’re committed to honouring this partnership in the best possible way: fighting for positive results on track and giving 100% to develop our activation off it.”