The start of F1 Bahrain GP qualifying had a spin from Haas’ Nikita Mazepin but the Russian managed to beat Mick Sachumacher on their first flying lap. At the front, Red Bull’s Max Verstappen steadied on from a surprise of AlphaTauri’s Yuki Tsunoda.

The Japanese F1 racer managed to get ahead of Mercedes’ Lewis Hamilton, whereas teammate Pierre Gasly – with new CE and ES – slotting in fourth. He was pushed to sixth after late improvements for many but all of those laps are under investigation.

There was another spin for Mazepin on the main straight – when on his push lap – but it was not that caught out Alpine’s Esteban Ocon (1m31.724s) and Aston Martin’s Sebastian Vettel (1m32.056s), who were 16th and 18th. They had to slow for Ferrari’s Carlos Sainz.

It was a medium game in second part of F1 Bahrain GP qualifying with both of Mercedes, Red Bull, AlphaTauri and McLaren drivers opting for the yellow colour tyres to set their best lap. All of them were in the Top 10 barring Sergio Perez and Daniel Ricciardo.

Both of them had their lap times deleted due to track limits, as Gasly and Tsunoda were on the bubble in eighth and ninth. They opted to remain on the medium tyres for their second run as well, much like Perez, while Ricciardo switched the soft compound.

The game was on in the final part of F1 Bahrain GP qualifying as Red Bull’s Verstappen had provisional pole by 0.023s over Hamilton, with a 1m29.526s lap. It was Gasly in third ahead of Bottas, with the latter on a used soft tyre for his first run.

UPDATE: Having been summoned for ignoring double yellow flag for Mazepin spin at Turn 1, Vettel was finally handed a five-place grid drop and three points on his superlicense, for the gravity of the incident. The stewards explained the matter in detail.

“The Stewards heard from the driver of Car 5 (Sebastian Vettel), the team representative and have reviewed video, radio, telemetry and marshalling system evidence, from both Car 5 and the cars surrounding him. Car 9 spun at Turn 1 in the last moments of Q1 bringing out a double yellow flag in the marshalling sector. Bottas, Vettel, Perez and Russell approached the scene and drove past Mazepin.

“Bottas, was immediately instructed by his team to abort his lap in accordance with the Race Director’s Event Notes (Point 7.1). Perez and Russell had received the chequered flag, and were instructed to slow, with Russell receiving the additional information that it had been a double yellow sector. Vettel did not abandon his lap. He explained to the Stewards that he saw the smoke ahead of him, but was unsure if it was a lock-up or a stopped car until he was quite close to the car and the smoke was lifting.

“The Stewards observed that he had already passed the signal panel when it illuminated as he approached the scene, and that the marshals in that turn had not yet reacted with a yellow flag. Nevertheless, Vettel was approaching a car that was stopped sideways on the track and by the rule this would necessitate a double yellow flag. During the drivers’ briefing, the Race Director emphasised that the flag code must be rigorously enforced. The Stewards consider that the requirement to abandon the lap during practice and qualifying, both in the Code and in the Race Director’s notes was instituted to disincentivise the drivers from any type of management of their speeds approaching an incident, with a view to maybe setting a lap time, when the requirement is that they should be able to completely stop when approaching such an incident.

“In this case, it was clear that the driver slowed slightly approaching the incident, but continued trying to set a meaningful lap time. In this case, the driver would have received a warning on his dash and the team should have been able to see that the sector had been a double yellow and could have advised the driver as other teams did. While the argument that the driver was already inside the sector when it went double yellow evokes sympathy, the Stewards feel it is important to note that he was approaching an incident visible ahead of him. Further, the car ahead, in the same position, was instructed to abandon the lap, as is intended by the Race Director’s notes. The Stewards therefore order the usual penalty in this case, a drop of five grid positions.” 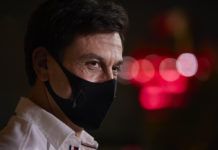