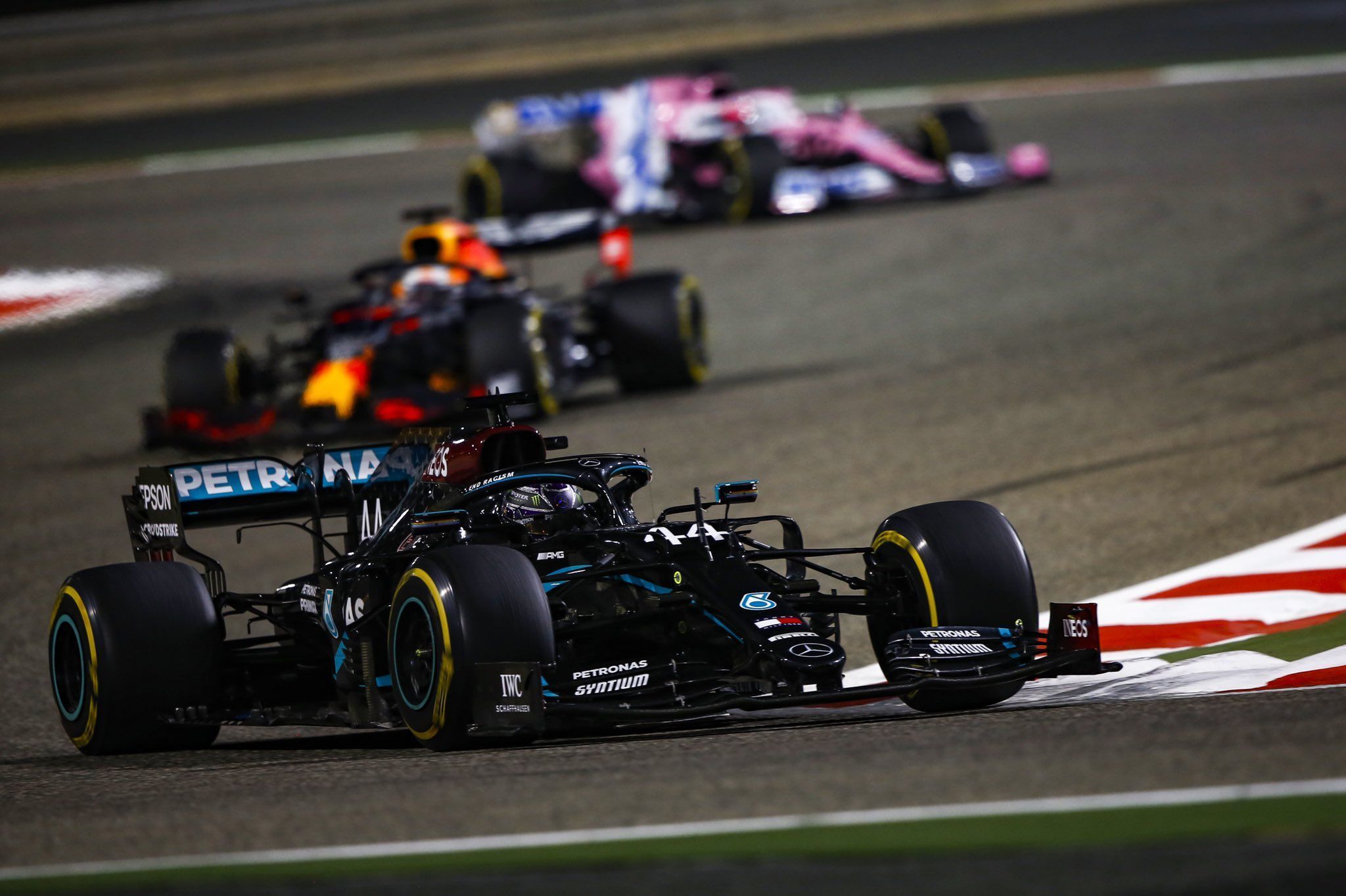 But the F1 Bahrain GP was red-flagged soon after a heavy shunt for Haas’ Romain Grosjean. The Frenchman went straight into the barrier after a contact with AlphaTauri’s Daniil Kvyat. It caught a huge fire but the Haas racer managed to escape it.

His car was in shambles as Grosjean was airlifted to the hospital after suffering from burns. The barrier was replaced by concrete as the race re-started after a lengthy delay with a new starting order for the second standing start in F1 Bahrain GP.

While the wait continued on, replays showed a hit for Norris when he was sandwiched by Ocon on the right and Gasly on his right as the Brit lost part of his front wing. He slowed which caught out Ferrari’s Sebastian Vettel as he bumped into Racing Point’s Lance Stroll.

The order for the second re-start had Hamilton ahead of Verstappen, Perez, Bottas, Albon, Ricciardo, Norris, Ocon, Gasly and Vettel in the Top 10. The pole-sitter maintained his lead but the Dutchman took second from the Mexican with the Finn battling the Thai.

They couldn’t even complete a lap on re-start as an incident between Stroll and Kvyat resulted in a safety car. The Canadian turned into the right-hander and a contact threw the Racing Point car upside down as the driver tried to sneak out of it.

A puncture for Bottas dropped him to 16th as Hamilton led Verstappen, Perez, Albon, Norris, Ocon, Leclerc, Ricciardo, Gasly and McLaren’s Carlos Sainz in the Top 10 behind the safety car. There was further trouble between the Ferrari drivers.

Vettel was unhappy with Leclerc coming into his way as the German dropped to 15th as a result. He was also caught out by the incident between Stroll and Kvyat. The other Haas of Kevin Magnusse was forced to change his front wing for a picked-up damage.

The Bahrain GP re-start worked well for Hamilton as he led Verstappen and Perez but Albon had to defend hard from Norris, which was similar for Ocon with Leclerc going wheel-to-wheel. The Frenchman stayed in front in sixth as Ricciardo jumped in the fight.

The Australian, though, lost more after Sainz got through him for eighth. The Spaniard passed Leclerc for seventh in a solid move at Turn 1 as Ricciardo got through the Monegasque as well, with the Ferrari racer then fending off the AlphaTauri duo.

For one of the AlphaTauri it wasn’t a good time as Kvyat was handed a 10s penalty for causing a collision with Stroll. At the front, meanwhile, held on with Hamilton even after the pit stop where the Brit changed to a used set of the medium tyres.

Verstappen, however, was on the hard along with Perez, who slotted in fourth behind Gasly but the Mexican cleared him quickly. Albon was on the medium tyres like Hamilton in fifth as Leclerc continued on in sixth, having not stopped for a new set.

It was Bottas behind him after his safety car stop as Norris was eighth after his stop from Ocon, Ricciardo and Sainz. A stop for Gasly and the Finn meant, Albon was fourth from Norris, Ocon, Sainz, Ricciardo, Gasly and Leclerc in the Top 10.

Ricciardo looked faster from Ocon but by the time they could have worked it out, Sainz not only passed the Australian but also the Frenchman to move to sixth behind teammate Norris. Things steadied in the Bahrain GP then until the second stop.

It was Hamilton still in the lead but the chance for Verstappen to get him was lost due to a slow stop. Perez retained track position over Albon in third as Gasly was fifth from Norris and Sainz in the Top 7. Leclerc positioned in eighth from Ricciardo and Ocon then.

It was a duel between the Renault drivers for long but the Australian stayed in front. A stop for Leclerc put Ricciardo in seventh from Ocon as Bottas was 10th then. The Finn actually caught the Frenchman and passed him for ninth.

At the front, Red Bull and Verstappen took the chance to go for a fastest lap point with 10 laps to go as Hamilton led comfortably with Perez in third from Albon and Norris. Behind, his teammate Sainz caught up Gasly and passed him for sixth.

The Frenchman had Ricciardo on his tail catching him but a safety car saved him for the time being. It was called in for an engine failure for Perez as the Mexican lost a secured podium to Albon with Norris and Sainz up to fourth and fifth as a result.

It was handy for McLaren in the fight for third in the constructors’ championship as Gasly was sixth from Ricciardo, Bottas, Ocon and Leclerc in the Top 10. Replays from an onboard from Norris showed a marshal running across the track towards Perez’s car.

It was another miss from the FIA side after several incidents early on. The grand prix eventually finished under the safety car as Hamilton won the F1 Bahrain GP from Verstappen and Albon, with two Red Bull cars on the podium together.

It was jolly time for McLaren with Norris fourth from Sainz as Gasly eventually hung on to sixth, with Ricciardo in seventh and Bottas eighth – despite a floor issue for the Australian and a late slow puncture for the Finn.

The Top 10 was rounded out by Ocon and Leclerc, with the later finishing a lap down, like Kvyat, Williams’ George Russell, Vettel, Williams’ Nicholas Latifi, Alfa Romeo’s Kimi Raikkonen & Antonio Giovinazzi and Magnussen – from 11th to 18th.

Perez did not see the chequered flag but was classified in 18th. DNF: Stroll, Grosjean.