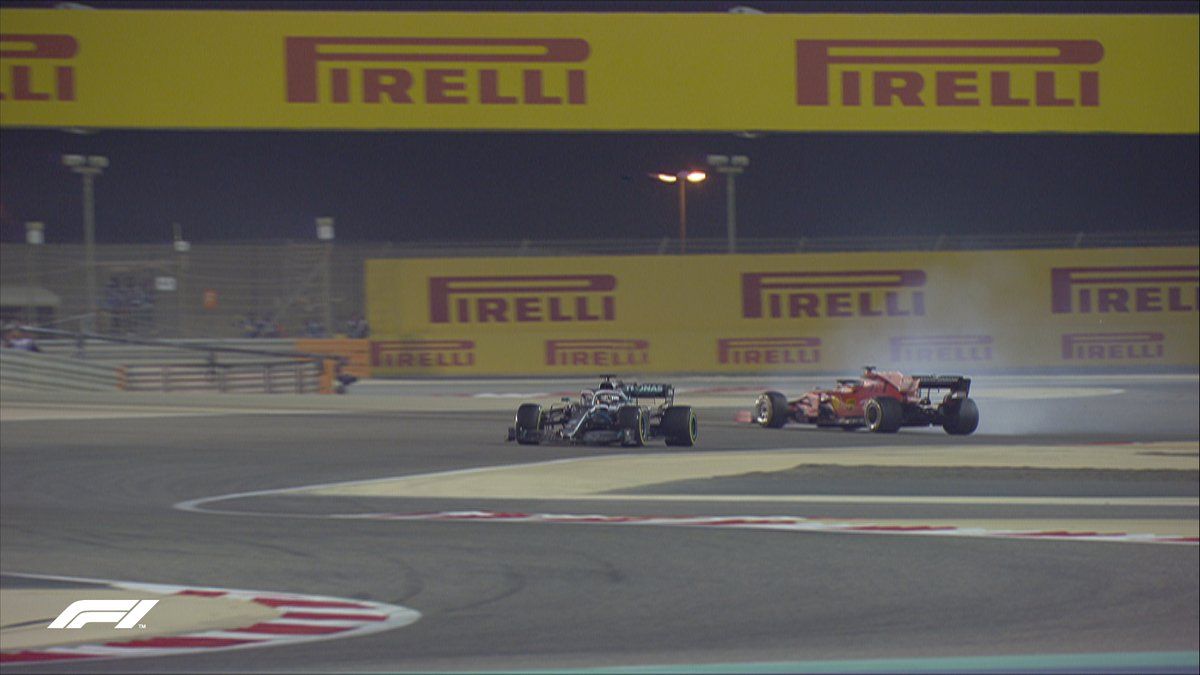 Hamilton did not have a good launch to start the Bahrain GP as he lost to Mercedes teammate Valtteri Bottas as Vettel took on his Ferrari teammate Charles Leclerc. But both Hamilton and Leclerc fought back to get ahead of their respective teammates.

It looked settled from then on with Leclerc leading Vettel but Hamilton stayed in touching distance with the German. Both the teams were on a two-stop race but Mercedes opted for a soft-soft-medium strategy to Ferrari’s soft-medium-medium.

It was the second stop which made all the difference where Hamilton stopped on Lap 34 to Vettel on Lap 35 to try the undercut. While it didn’t work straight up as Hamilton stayed behind Vettel but the gap which stood nearly four seconds was down to just one.

It gave the Mercedes driver the opportunity to attack which he did and took the track position as Vettel spun to fall behind in eighth – requiring a third stop to change on the soft compound. The pass was crucial for Hamilton to gain track position.

Explaining the little details of how they reached upon attacking Vettel, Allison said it was more to do with the track surface where the driver stopping before will have a huge advantage over the guy stopping a lap later in terms of going quicker.

“Undercuts play a big part in the strategic choices made by the teams,” he started. “That’s because over the course of a stint, tyres gradually get slower and slower, meaning if you come in and put fresh tyres on you go a lot quicker.

“That gives you opportunities around a pit stop to jump in front of someone by putting on a faster set of tyres and throwing in a quick lap and perhaps surprising someone who stayed out on the track.

“Now, at a normal circuit the amount that the tyre gets slower per stint is about one second. So at the end of your stint you can come in and put new boots on and effectively get a jump of about one second relative to your opponent.

“Bahrain is a very different sort of track. Here the asphalt is super rough, super hard on the tyres and as a result, instead of just slowing down by over one second over the tyre life they slow down by about two and a half seconds.

“Which means that the car who comes in first for fresh rubber will go insanely faster for a lap or two compared with the one that stayed out. That means you can jump forward by a huge amount.

“We saw this most strongly with Lewis in his second stop relative to Sebastian. Before the stop Lewis was about four seconds behind. One lap of fresh rubber after the stop and he was able to close up to the back of Sebastian’s car.

“That gave us a chance to attack and eventually overtake him. So, in Bahrain, the undercut becomes really important tool for strategists and often determines the outcome of the race.” Even though Mercedes were a slower car, strategy helped them to take on Vettel.

They got lucky then with Leclerc’s issues as Hamilton scored the win – showing the importance of the earlier pass – and Bottas ending up second. Allison also talked about the lack of pace from the Finn’s side which the team couldn’t pinpoint the reason for.

He said that Bottas complained of inconsistencies in the whole grand prix with multiple contributing factors which may have hurt his pace including the wind, where the drivers lost about a second per lap at the start of the race.

Here’s a chart from Mercedes which shows the higher level of winds: