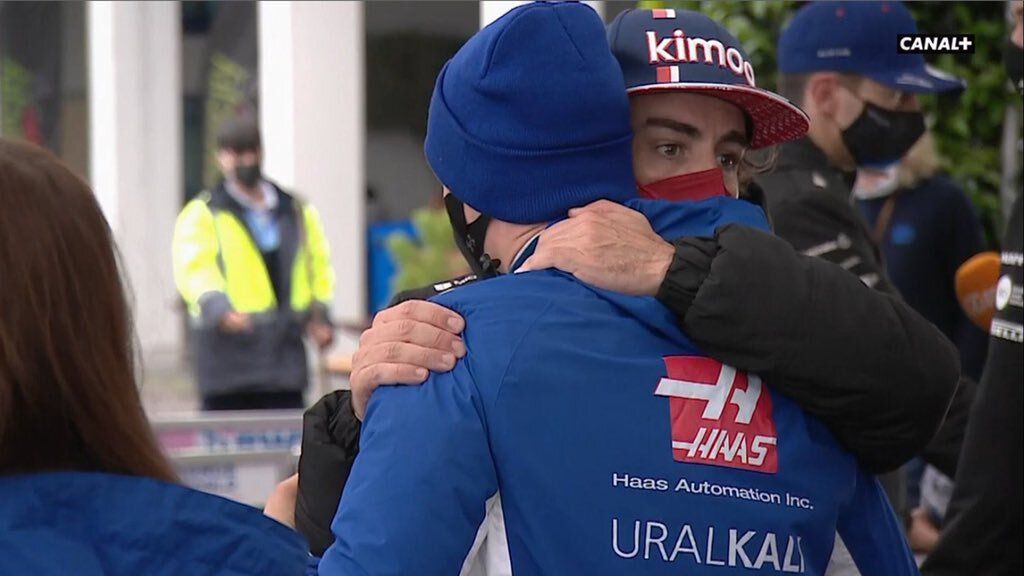 Fernando Alonso duly apologised for his divebomb against Mick Schumacher in F1 Turkish GP with an embrace as the duo speak more.

Alpine’s Alonso took the time after the F1 Turkish GP to find Haas’ Schumacher, who he made contact with at Turn 4, to embrace him and apologise for his mistake. It saw the German spun round in similar fashion to the Spaniard himself on Lap 1.

It was a career best 14th on the grid for Schumacher after competing in his first ever Q2 on Saturday. The race was always going to be hard though and holding position would inevitably be too much to ask. At the same time, it was Alonso’s best grid slot since his return to F1 with fifth place but a Lap 1 incident with Pierre Gasly saw his race ruined and the Spaniard fell to near the back.

It was on his fightback through the field that the incident with Schumacher occurred. Turn 4 has a long and sweeping entry which makes the door of the driver in front seem wide open so going for a lunge is always tempting. Perhaps slightly frustrated after the Lap 1 incident Alonso went for the dive.

Unfortunately, Schumacher saw him too late and contact was made and the German’s best qualifying of the year was ruined as he fell to the back. Alonso received a 5 second time penalty and was acceptant of the punishment. “We touched each other, unfortunately he had the spin and I got the penalty,” he said to written media.

“I take it of course, because I’m sorry to have the collision with him.”  The experienced Alonso happy to admit to his mistake, probably knowing that the move was always a risk. “That happened only because I was P14, I should not have been, but the luck seems to keep avoiding us this year big time, so I guess we are accommodating a lot for next year.”

As Alonso said, if it wasn’t for his Turn 1 incident with Gasly, this would never have happened, but unfortunately, it did. The Spaniard has been unlucky this year, a few unfortunate DNFs and Turn 1 incidents that he was not at fault for like in Turkey have lost him a chunk of points in 2021, he feels it’s time that the tide turns in his favour.

Schumacher kept his cool and showed a mature head when speaking of what must have been a heavily frustrating incident. “I think those kind of things happens, especially in long corners when you have to prepare for Turn 4,” he said to written media. “It becomes easy to try a divebomb and unfortunately this time it didn’t work out but again we learn and we just move on.”

Hinting at the nature of turn 4 there as mentioned earlier. It would be easy for Schumacher to point the finger and show some frustration but his words here are a tribute to his character. “I don’t know if there was any damage, nothing visual but we will sit down and see because I didn’t feel 100% afterwards,” he said.

The crash potentially left the Haas with some damage which would have further compromised his race. Although the contact was minimal, on the current era of cars, the smallest bit of damage can have dramatic consequences. It left Schumacher is last place, unfortunately familiar territory this season, battling with his teammate once again.

“I don’t know how much that following killed my tyres, obviously I was following Nikita for quite some time, I imagine I would be able to extend the run and go a bit faster probably, I don’t know if we would be able to fight Sebastian a bit but I don’t see myself finishing positions further ahead,” said Schumacher.

Sebastian Vettel’s ill informed decision to try the slicks could have left him battling Schumacher and the Haas cars at the back but he managed to keep in front just enough with the gap. But even in the wet, following is still an issue. The incident with Alonso only sped up an unfortunately inevitable process of the German falling to the back of the field with his teammate.

The Haas car simply isn’t good enough to compete, but Schumacher lost out on what would have been some good battling with other drivers. “Lost experience? Yeah, maybe but again those things happen, something I can’t affect right now, I just focus on positives and take on the next step,” he said.

As he said, crucial experience missed out on yes, but Saturday was a massive positive for Schumacher and the team and his words here again show that at just 22, he has a very mature head on his shoulders. Alonso’s fault, wholly his fault as the stewards would say, yes.

It cost Schumacher some potential experience battling with drivers other than his teammate. But Alonso embracing the German post race and apologising definitely helped the situation and diffused any anger or animosity sitting with Schumacher.