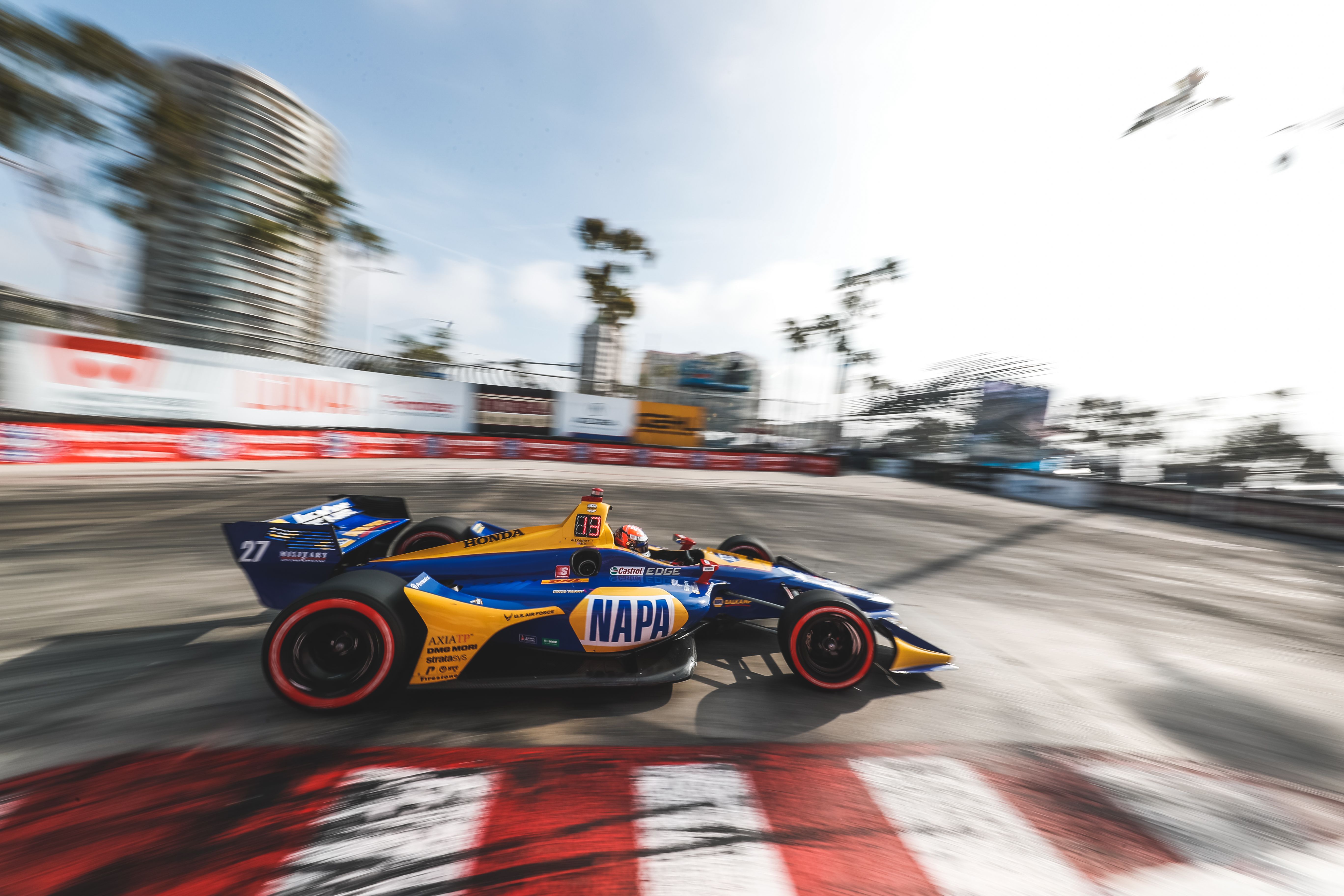 Alex Rossi has taken his second consecutive at Long Beach after a dominant race on which he had actually have no rivals. Josef Newgarden finished second with Scott Dixon on third place. It was not the most thrilling of races.

The green flag waved and Alexander Rossi and Scott Dixon raced wheel-to-wheel until the first corner. It was the pole sitter who held his lead. There were few position changes and it seemed to be a clean start. At the back, however, Matheus Leist hit Zach Veach from behind and unleashed a chain reaction that left Spencer Pigot, Marcus Ericsson and Jack Harvey stuck. The yellow flag flew, and all drivers managed to pit to fix the damage. The Swedish SPM driver was given a drive-through penalty for avoidable contact.

The race got restarted and Rossi defended his lead well again. On the mid of the pack, Pato O’Ward lost to places to Colton Herta and Felix Rosenqvist and saw himself demoted to eleventh. The Mexican driver lost two more places, something was clearly going wrong on his car.

The first stint proceeded with very few relevant actions. On lap 25, Ryan Hunter-Reay, who was on sixth, was the first driver from the front to pit. He was followed by the leaders, Rossi and Dixon, who went for tyres and fuel on the next lap. Santino Ferrucci ran wide and stalled the car on a runoff area. That made everyone to pit as the caution was expected. After everyone had stopped, Will Power passed Dixon on track. Josef Newgarden left the pits ahead of both of them. Penske had just made the overcut work.

The Dale Coyne, after being helped by the stewards, managed to return to the track. The yellow flag did not wave. Trying to defend from Dixon, Power braked too late on turn 1 and ran very wide, losing from third to eighth position.

Colton Herta, the winner in Austin. Lost most of his options after disastrous pit stop. Trying to recover from that, he hit the wall and caused serious damage on his front wing. He made it to the pits but retired from the race.

The lead drivers started to pit for the second time on lap 55. The top 2 remained unchanged with Newgarden behind Rossi. The following places were switched as Graham Rahal was third followed by Hunter-Reay, Dixon, Simon Pagenaud and Power.

Absolutely nothing but a pass happened until the end and Rossi took an astonishing, dominant win in Long Beach. He led the majority of the race and has had no rival for this win. Newgarden, with an intelligent strategy, finishes second with Rahal on the final podium spot. The RLL driver, however, was given a penalty for blocking on the last lap and los the podium place to Dixon, who had previously overtaken Hunter-Reay. The nº. 28 ended fifth with Pagenaud, Power, Takuma Sato, James Hinchcliffe and Rosenqvist complete the Top 10.

These results allowed Newgarden to keep the standings lead with 166 points. He was followed by Rossi 28 points behind. Dixon sat 8 points behind the Andretti driver with Sato on fourth with 116 points.