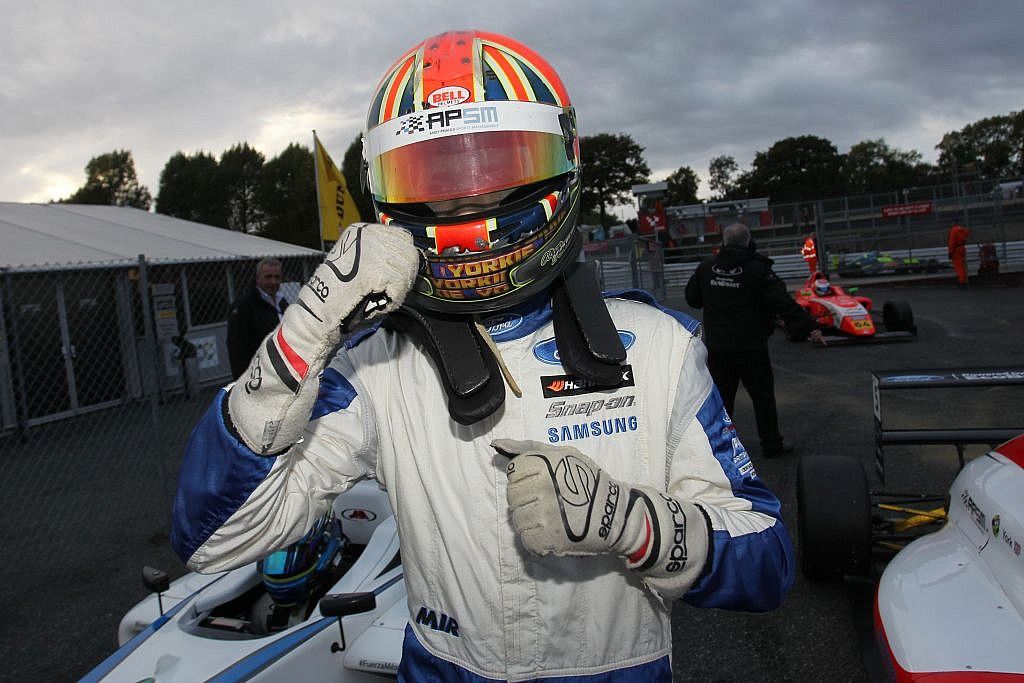 Fortec Motorsports’ Oliver York seized the initiative in a dramatic race at Brands Hatch to take his second win in the F4 British Championship certified by FIA – powered by Ford EcoBoost.

Having made an excellent getaway which almost saw him take second place in the opening exchanges from front row starter Patrik Pasma; York pulled off more start line heroics after the race was restarted following a red flag on lap two after a collision involving Harry Dyson, Jamie Sharp and Lucas Alecco Roy.

The Fortec Motorsports racer shot off the line and squeezed through a gap not much wider than a British F4 car between Manuel Sulaiman and Pasma to take the lead. The latter taking to pit lane for a nosecone change. Fastest lap of the race acting as some consolation.

In second place Manuel Sulaiman was soon under pressure from Jamie Caroline who, having been crowned FIA British Formula 4 Champion in the preceding race, was determined to celebrate in the best way possible by pushing to the absolute limit.

The Warlingham racer pulled off some audacious overtakes to make quick progress up the order from eighth. A particular highlight was his pass on race one winner Linus Lundqvist into Paddock Hill Bend on lap two; Caroline leaving it late to dive down Lundqvist’s inside, locking his front right tyre and just holding on to make the corner without running off the track.

Starting sixth at the restart provided Caroline with the opportunity to entertain with another trademark storming start, overtaking several cars around the outside of turn one and he ultimately dispatched Sulaiman with a precision move through Clearways.

It left York having to fend off the advancing Caroline for the lead and he did so brilliantly to cross the finish line just 0.330s ahead of Caroline.

Behind the leading pair, JHR Developments driver Sulaiman was putting on an exemplary display of defensive driving as Logan Sargeant, Oscar Piastri and Ayrton Simmons hunted him down for the final podium spot. Sulaiman was resolute however and refused to crack under the pressure, positioning his car perfectly to bring home his maiden British F4 podium.

TRS Arden’s Olli Caldwell put in one of his best performances of the season to finish seventh after holding off the experienced pairing of Linus Lundqvist and Alex Quinn.

Richardson Racing’s Webb will be happiest of the trio, extending his Challenge Cup lead by six more points to give him a nine point advantage over Ericsson heading into the final race of the season. Meanwhile Falcon Motorsport’s Allen battled brilliantly to keep Ericsson behind him and take the final podium spot in the Class.