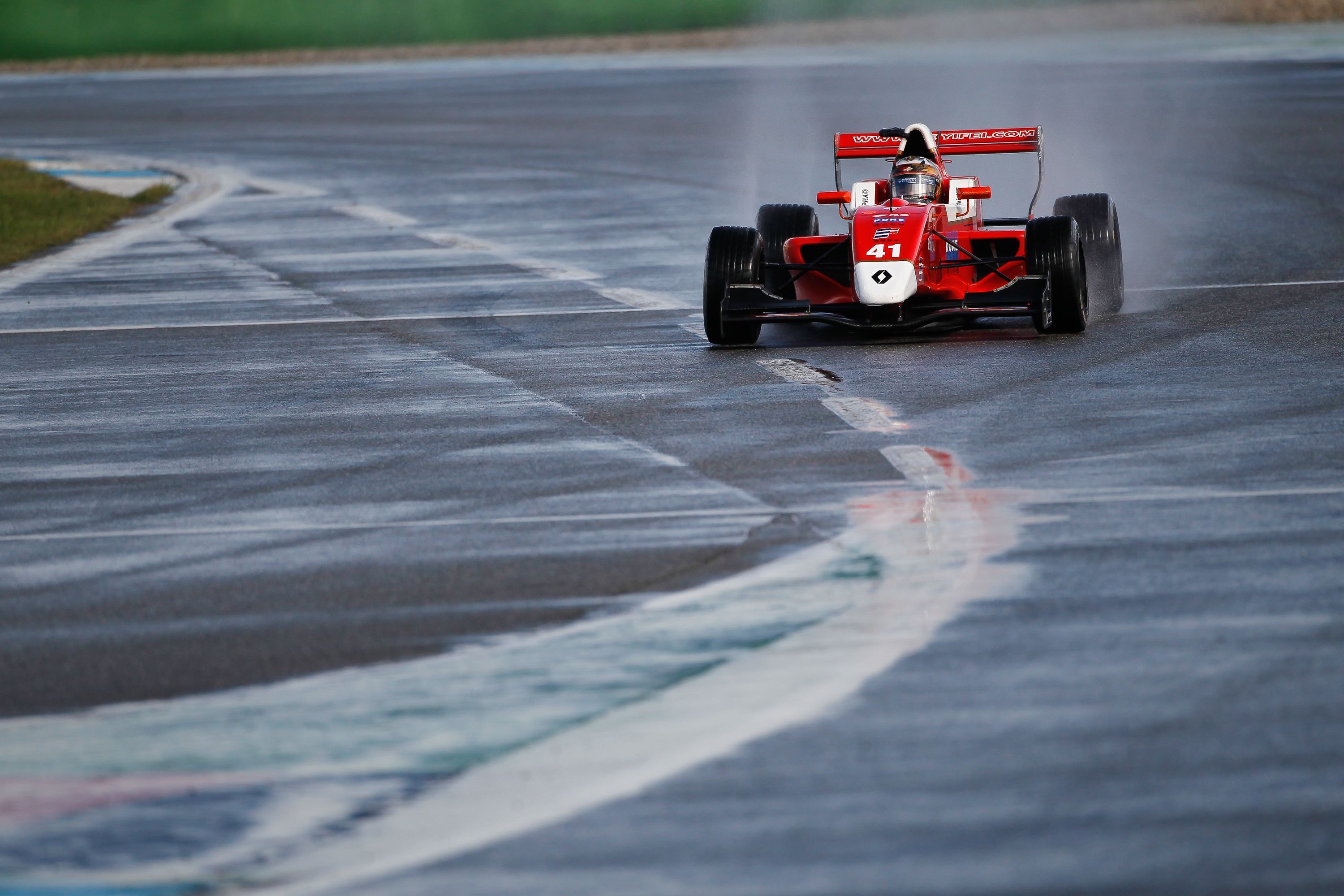 Yifei Ye has taken a brace of pole positions – his first in the Formula Renault Northern European Cup (NEC) – after going quickest in both wet weather qualifying sessions at Hockenheim this afternoon [6th October].

With team-mate and current Formula Renault Eurocup leader Sacha Fenestraz for company on the front row, the stage is set for a battle royale between the Josef Kaufmann Racing duo in each of tomorrow’s contests.

MP Motorsport’s Richard Verschoor and Jarno Opmeer both put in strong showings on their first-ever visit to the 2.8 mile circuit, with the former claiming third on the grid for the opening race with his team-mate fifth. The two will swap positions for the second contest.

Gabriel Aubry (Tech1 Racing) still remains in mathematical contention for the championship crown – set to be decided in an action-packed double header tomorrow at 09:30 and 17:00 CEST respectively – and after securing fourth for both races the Frenchman has left himself best-placed of the title contenders.

With only a five point deficit to current standings leader Gilles Magnus, his R-Ace GP team-mate Michael Benyahia – fresh from a trip to Valencia to test for the Venturi Formula E outfit – outqualified him on both occasions to put himself in the frame for the honours should he out-score Magnus sufficiently on raceday.

It proved to be a difficult afternoon for Magnus – after a red flag for team-mate Charles Milesi’s stricken car nearly robbed him of the chance to put in a flying lap in the first session, he could only manage 14th in the second. He remains in the driving seat for the title, but will face stern opposition to remain there come the end of tomorrow.

BM Racing Team’s Bartek Mirecki sits slightly further back in the points, but did everything neccesary to put himself ahead of the duo for the second race in 6th. Starting down in an unlucky P13 behind them for the opening race, however, means the 21-year old needs to come out fighting in the curtain-raiser.

British F4 regulars Oscar Piastri (Arden) and Logan Sargeant (R-Ace GP) will start a race from seventh and tenth apiece after consistent running on their debut weekends in the series – the latter impressively topped the opening free practice in dry conditions.

Alex Vartanyan (Arden) will also look to secure a brace of top ten finishes and continue a consistent return to the championship this weekend.

James Pull is no stranger to the NEC either, having raced earlier in the season at the Nurburgring, and his best chance of a maiden podium is likely to come from sixth in the first contest.

Charles Milesi, Théo Coicaud and Thomas Neubauer will also look to be in the hunt for points, the former after recovering from a spin at Turn 13.