Home Motorcycling MotoGP Yamaha unveils its bike for the 2018 season 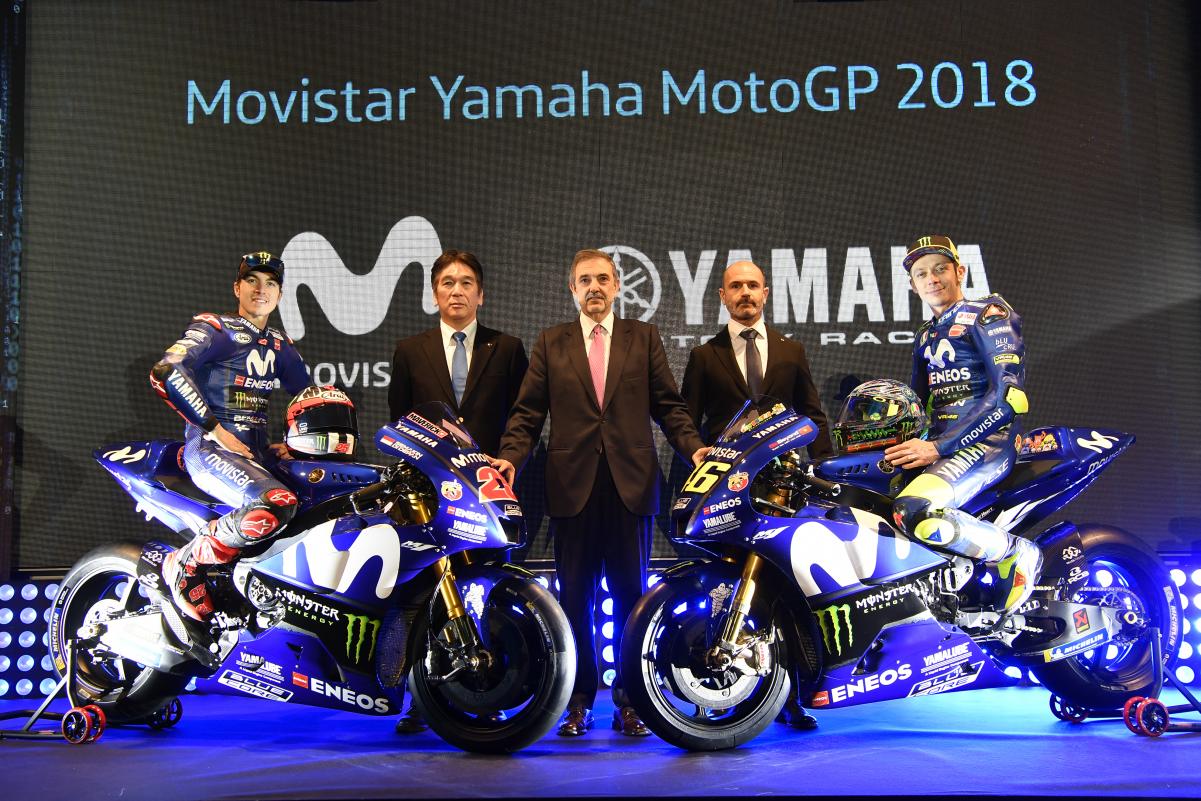 Movistar Yamaha MotoGP has unveiled its new bike and livery on an official presentation act held in Madrid. Riders Maverick Viñales and Valentino Rossi were the ones that unveiled their own new machines at the end of the act, with some visible changes on the livery.

Yesterday, the Movistar Yamaha MotoGP team held an official act in Madrid, where both the racing team and the communication company celebrated their fifth year together, with the achievement of the three world championships in 2015 and the Teams’ title in 2016.

However, the main purpose of the act was the reveal of the bikes with which the team will try to win the championship in 2018. These were shown at the end of the event and were unveiled by the team riders, Maverick Viñales and Valentino Rossi.

The bike shown a remarkable change on its color scheme. Blue keeps being the dominant color, but white has gained more presence on the livery as the Movistar big ‘M’ is displayed in that color.

During the act, the team director and both drivers talked about the new machine and their expectations for the upcoming season. The main goal for the season is, as they said, winning the title.

Massimo Meregalli – Movistar Yamaha team director: “It was really important to test in Valencia and then in Sepang, because we could compare the same items on two different tracks with different conditions. At the end of these five days, we could decide the base of the bike that Valentino and Maverick will now start testing in Sepang in a few days.” That first test of 2018 begins on Sunday at the Malaysian venue where, as Meregalli pointed out, Yamaha put in a private test towards the end of 2017. Now, work will concentrate on reconfirming and developing, with some specifics to work on.

“In Sepang we need to confirm what we found in November, then we’ll start developing the bike with new parts from Japan.” And we’ll work on the electronics, which we couldn’t do in November, so I expect us to improve in that area. Last year we suffered a lot in that area and our main goal is to solve that.”

Valentino Rossi:“I think the testing is very important because you can understand what will happen during the season.” Normally during tests you can understand that. We have to work hard I think, because we’re coming from last year which wasn’t the maximum for me or the team. I think we can do better. We have to work a lot on the M1, concentrate on the bike, the electronics and the details to try and be fast and use the tyres better – which I think was the key to the season last year.”

The other rider of the team, Viñales, confirmed on the presentation that his deal with the Japanese manufacturer has been extended for two more years, until 2020.