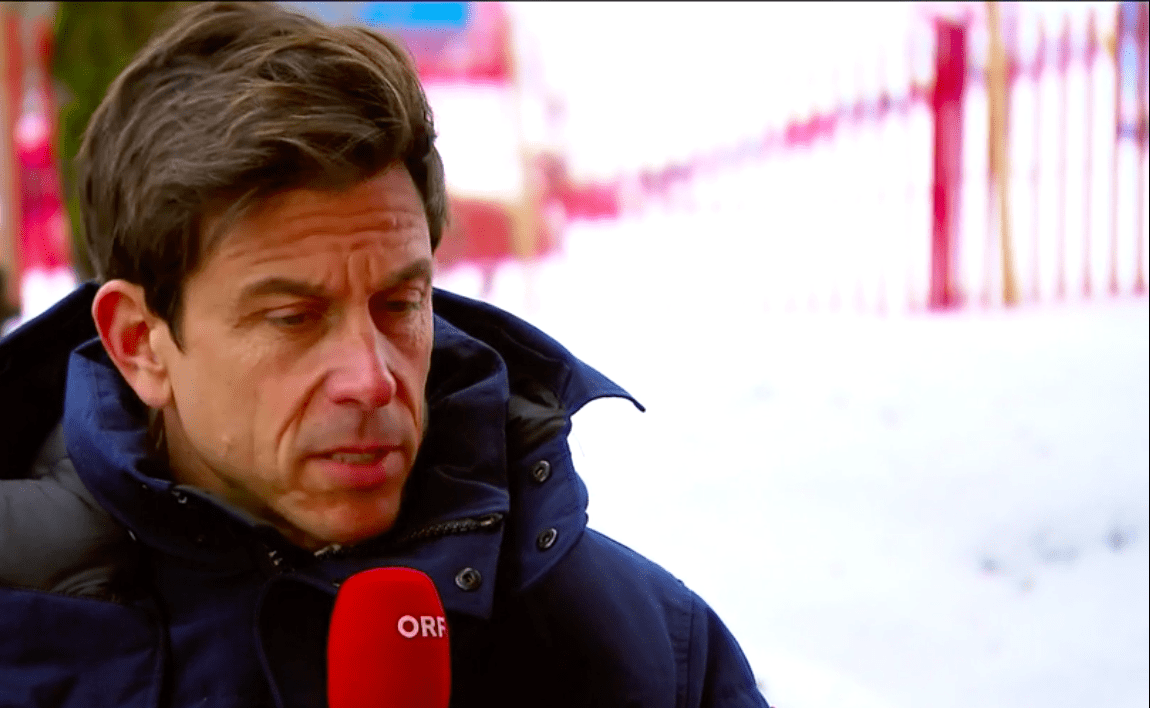 Toto Wolff has revealed about catching COVID-19 recently, as he opened up on the contract situation with Lewis Hamilton, the 2021 season and more.

In his first interview during the current winter period, Mercedes’ Wolff spoke to ORF’s Sport am Sonntag show from Kitzbuhel, where he is currently with his family. The Austrian traveled there to spend some family time but out of nowhere tested COVID-19 positive.

He had no symptoms but had to quarantine himself for 10 days. Wolff becomes the fourth key F1 team personnel to catch COVID-19 virus after Lawrence Stroll (Aston Martin), Simon Roberts (Williams) and Jonathan Wheatley (Red Bull Racing).

Among drivers, after Sergio Perez, Lance Stroll and Lewis Hamilton caught it during the 2021 F1 season, Lando Norris and Charles Leclerc, have since caught it too. “We planned to stay for some days in Kitzbuhel, then out of nowhere I had a positive COVID test.

“So we quarantined ourselves for 10 days here. Thankfully no symptoms, because it can also go badly, but we are now out of quarantine,” said Wolff, as he then took upon a key question regarding Hamilton and his contract status amid host of rumours.

Wolff noted that he hasn’t signed till now as they are still negotiating, especially, their lawyers. The Austrian denied that Mercedes played the George Russell card due to his Bahrain performances – as is being written in the press.

He repeated the post-season stance of extending the talks to even until Bahrain test if need be. On a more lighter note, they even joked about a Plan B being the Austrian himself. “As is the case with negotiations, you come from different corners, but that’s quite normal,” he started.

“We have a solid basis in our relationship, we have enjoyed great success and we want to do that in the future but sometimes you have to talk things out and that took us some time or it’s still going on but before Bahrain at the latest we have to sign something.

“There is no deadline, the lawyers are working hard, of course we don’t make life easy for them when we both argue over Zoom and keep sending curved balls to the lawyers. But he is now in the US and I’m here and at some point we will finalise it.

“As for a Plan B, yes, I’ve already threatened him that I’ll be the next in line to sit in the car. We just have to adapt the car, that’s the only problem, but jokes part, it is only about time. We never played the Russell card either. He’s sold himself incredibly well.

“One day he’ll be in a top car but our long-standing partnership is not about any threatening. We know we want to race together and now we just have to negotiate [which we are],” summed up Wolff, as he joked, “We’ll get the fountain pen out one day, but if we don’t see each other it’s difficult to sign something.”

Moving on, Wolff about his challengers Red Bull and Honda. With the team getting Sergio Perez in, the Austrian feels that the fight will get interesting with two cars to tackle. Even for Honda, he reckons, the Japanese manufacturer will give their all in their last year.

“I think Red Bull with Perez will be a much stronger contender for the Constructors’ Championship,” said Wolff. “I think Sergio is very strong here. It will also be interesting to see how Segio holds up against Verstappen. So a stronger opponent and otherwise it’s a season with the same equipment as last year.

“I think Honda will really push hard in their last year and that’s why it will be interesting,” summed up Wolff, as he then talked about Christian Horner’s comments on Max Verstappen being better than Hamilton. “Christian can’t stop with the teasing in the background, but that’s part of the game.

“You can only judge the best drivers on the grid if you let them race each other. We didn’t see Lewis against Max, we didn’t see George against Lewis, we haven’t seen Charles Leclerc in a top car,” said Wolff.

Here’s an update from Lewis Hamilton on his training

Here’s how Valtteri Bottas did in Arctic Lapland Rally