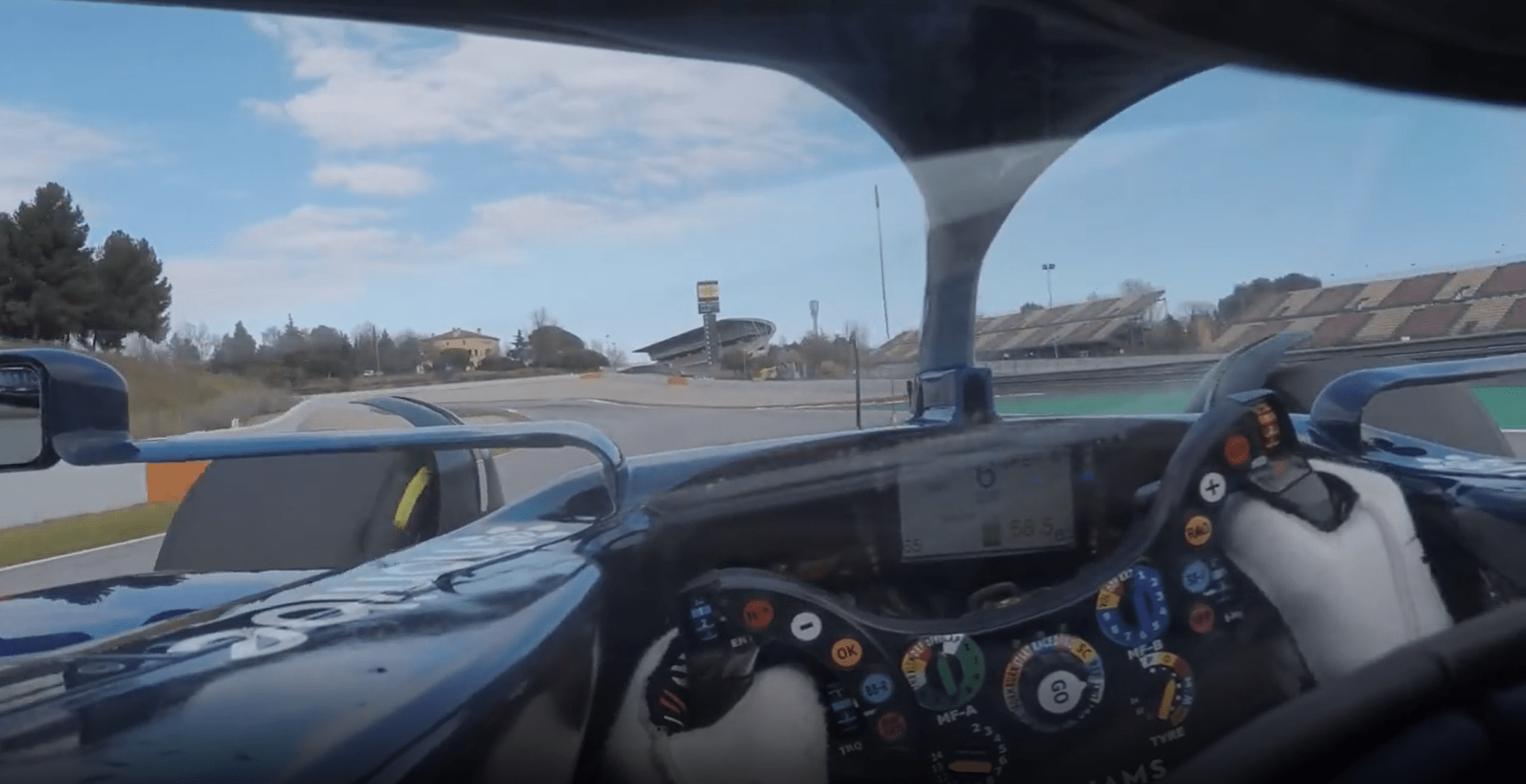 Williams has shared a fascinating ‘helmet-cam’ video of a reconnaissance lap of Nicholas Latifi’s from Barcelona in the new FW44, in which viewers get a unique insight into a drivers’ actions and thought processes inside a F1 car.

The lap in question shows off the entirety of the Williams unique dashboard head-up display in all its glory, with no obvious censoring of sensitive information. The team had a decent first test in Barcelona with both Latifi and Alexander Albon completing a healthy amount of laps and setting some good lap times too.

Speaking more on the test, Latifi explained how the first pre-season running in Barcelona for Williams was purely focused on understanding the car’s “broad” characteristics however, with the team still in the dark over its “true potential”. Therefore not a huge amount can be asked of of the lap times, and indeed the gentle pace shown in the onboard footage.

The Canadian is embarking on his third season with the team in which he debuted with in 2020, but this time alongside his second-ever F1 teammate Albon, after Brit George Russell departed for Mercedes.

Williams goes into 2022 fueled with expectation that the technical regulations overhaul will power them back towards the front of the grid, rather than increasing the gap between the respectively small team and the larger manufacturer outfits.

The FW44 seemingly forges its own path aerodynamically, as have many other teams’ designs, due to its distinctive sidepod arrangement and tightly-wrapped engine cover. Latifi asserts that the car feels different to drive, but is unsure exactly how much he needs to adapt to suit it.

“It definitely requires a different driving style, at least compared to how the car was last year and the previous years, so I think it’s still too early to be honest to know if we can get it in a place where it exactly suits my driving style,” Latifi told FormulaRapida.net, when asked if the car suits his driving style.

“We haven’t really been chasing outright performance in Barcelona, we were just trying to understand the systems, this kind of aero platforms’ sensitivities and kind of just going through a broad range of simple tests and not really fine tuning to see okay what is the outright performance, how are we going to optimise the exact setup to make me feel comfortable and to make Alex feel comfortable and whatnot.”

Latifi is reassuring that the team has areas it knows for sure that it can improve on performance-wise, and that pre-season Barcelona times can not necessarily be read into. “Some things are definitely a nice step forward in terms of feeling, obviously it’s clear the cars are slower than last year, I think there’s no doubt that anyone’s slower, there’s some things that are clear areas where we need to address these things and we’ll easily find some lap time by doing so,” he continued.

“But I think Bahrain we know will be more representative, not only because it’s a track we race on but it’s one we race on in similar conditions and you don’t here in the case of Barcelona testing,” summed up Latifi.

He also commented on the likelihood of last year’s car’s inherent wind sensitivity issue carrying forward into the new Williams car, surmising that “we won’t know 100% because the wind has been very low to non-existent [in Barcelona]”, but from what he had felt the wind won’t be “as detrimental”.

“I mean to be honest, I think until we drive in windy conditions we will not know 100% because the wind has been non-existent these last few days at least while I’ve been driving, so I’ve not felt any issues with sensitivity yet and I hope it’ll be fine but we’ll have to see until we get some proper wind but from what I’ve felt it doesn’t seem like it’s going to be as detrimental but let’s wait and see until we have some windy conditions.

“We really don’t understand what the car’s true potential is right now, we’re just trying to make sure we have a reliable car by the time we get to Race 1 in Bahrain and we understand a broad scope of the car’s operating window… We’re just trying to understand these little nuances that come along with this new car, but come Bahrain we’’ll try and dial in more performance,” summed up Latifi.

Here’s Alexander Albon on Williams and Red Bull plus experience

Here’s Alexander Albon and others on 18-inches tyres