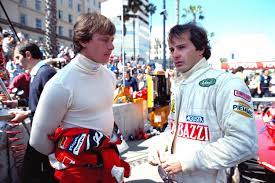 The year 2022 will mark the 40th anniversary of an incident at a Formula One Grand Prix weekend which had tragic consequences shortly afterwards.

The 1982 Formula One season had a fractious beginning.  Owing to technical infringements and disqualifications, only 14 cars (seven teams) would be on the grid for the San Marino Grand Prix due to protests by the other teams.

Two of the cars were the Ferrari’s driven by Gilles Villeneuve and Didier Pironi.  This was their second season as teammates.  The previous season had been irritating, punctuated by unreliability.  Nevertheless, Villeneuve was victorious in two Grands Prix for the team.

As teammates they got on extremely well which was rather unusual.  Away from the track, they enjoyed each other’s company, occasionally socialising together.  Having said all this, Villeneuve was deemed to be the number one driver.

On lap 45 of the Grand Prix (60 lap race), they found themselves running first and second after Rene Arnoux had retired from leading the race.  Pironi and Villeneuve put on a show for the predominantly Italian crowd.  The fans were thrilled; their beloved Ferrari’s were going to finish in first and second places.

Now, it starts to get interesting.  Villeneuve was leading from Pironi.  Over the next while, they passed and repassed each other.  They could afford to take things easy, look after their tyres and engines.  Their nearest challenger was a full minute behind.  They could more or less cruise to the finishing line.  Villeneuve for the win and Pironi in second place.  Straightforward isn’t it?

As per above, Villeneuve was the number one driver, team orders would decree that he would be the race winner.  He trusted Pironi to allow him to win the race.  He would finish first and Pironi second.  All this passing and repassing was slightly irrelevant as he would cross the finish line on lap 60 in first position.  Well….this is what Gilles envisaged.

From the pits, a message stating SLOW in clear writing was displayed several times over the closing laps.   Entering the final lap of the race, Villeneuve was leading.

“You get a SLOW sign and that means hold position.  That has been the case ever since I’ve been at Ferrari”.   Gilles Villeneuve.

“SLOW means to be careful not to crash – but there was no restriction on overtaking”.   Didier Pironi.

Midway through the final lap, Pironi pulled off an ambitious overtaking manoeuvre.  It shocked Villeneuve, the move caught him hopping.  There was no recovery.  Pironi went on to win the race and Villeneuve finished second.

Villeneuve was livid and furious.  On the podium, he stood forlorn, silent but extremely angry.  This was HIS race to win.  It was to be HIS nine points.  No champagne from him.

Then again, it raised the question of team orders.  How fair were they?.  Should team’s really favour one over the other?.  Both had similar levels of experience, Villeneuve’s record was the more impressive of the two though.

“Before this, our relationship had always been good and I trusted him-but I won’t make that f***ing mistake again”.  Gilles Villeneuve.

The Ferrari team manager; Mauro Forghieri was not there that weekend.  His stand in was Marco Piccinini.  According to Pironi, Piccinini was in charge of the orders and he did not have any for this race.  As a side issue, Piccinini had been best man at Pironi’s wedding some weeks earlier.

“I wished I could have been there to manage the situation in a clearer and right way.”  Such a sign that might have read: “1-GV, 2-DP rather than just slow”.  Mauro Forghieri.

“The team have not said anything against my win and had they wanted Gilles to win, they would have hung out a sign.  Our team is directed in an intelligent way.  When the orders are clear and precise, there will be no problems”.  Didier Pironi.

Two weeks on, all the team’s assemble for the Belgian Grand Prix this time.  At Ferrari meanwhile, there are no conversations between Villeneuve and Pironi.  Surely some intervention would have helped, but it would appear not to have been the case.

It would be only right and proper for SOMEONE to intervene between the drivers.  Both too stubborn and proud.  Urgent intervention was necessary. It never happened.  This was a time of no Social Media, no PR guru’s.  Times have changed…….

Not long left in qualifying,  Villeneuve, a tenth of a second behind Pironi, pole position was too far ahead for either driver.  Villeneuve left the pits, a slow warm up lap would be followed by a qualifying lap.

Warm up lap complete, up to full speed, only interested in beating Pironi.  He never got the chance, a slower moving car, an horrific impact, the Ferrari  disintegrated with Gilles being thrown from it into the catch fencing.  Silence everywhere.  Later that night he passed away.  Due to the nature of the crash, everyone knew that afternoon that it would have been a miracle if he had survived.

Bottom line, pure and simple, thirteen days earlier if more stringent team orders had been administered and adhered to, this would not have happened.  However, as it did happen, more officious intervention from management should have followed after the event.

All because of  betrayal, misunderstanding,  misinterpretation.  But then again, it might also depend on whose corner you are in.

Fate had not finished with Ferrari.  Newcomer Riccardo Paletti fatally crashed into Pironi’s car in Montreal, Canada five weeks later (ironically the track had been renamed “Circuit Gilles Villeneuve”).  In August, Pironi crashed at Hockenheim during qualifying for the German Grand Prix, in an accident similar to Villeneuve’s. From this he suffered career ending injuries.  He finished runner up in the Driver’s Championship that season.

Sadly, in 1987 he lost his life in a Powerboat crash.  His thirst for speed was never quenched.

…. Almost 40 years on, that fateful afternoon of April 25th 1982 coupled with the events 13 days later are still being talked about.  If this, if that, if the other.  Is it a coincidence that IF is F1 spelt backwards?.