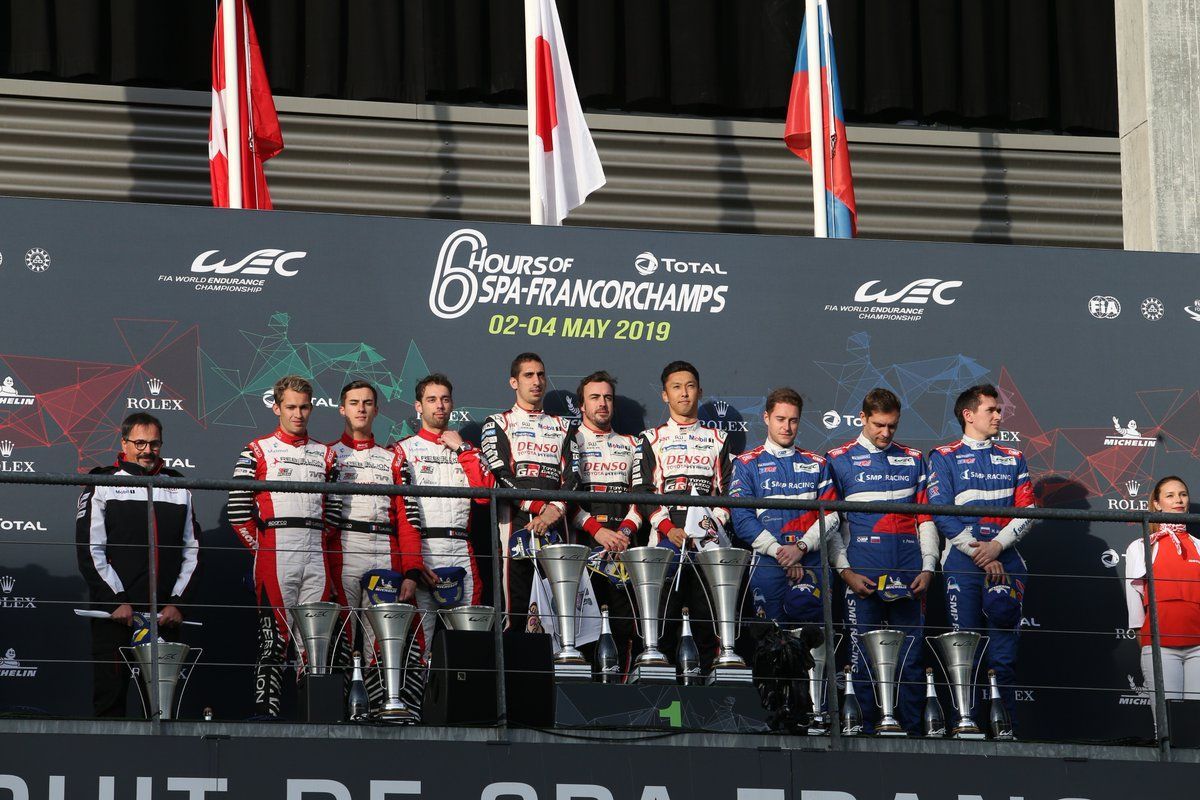 Toyota sealed the FIA World Endurance Championship’s (WEC) constructors’ title with victory in 6 Hours of Spa-Francorchamps for the #8 crew in a snow-hit race.

The race day already saw snow hit the Spa-Francorchamps circuit with the weather then clearing a bit by the time the 6 Hours of Spa-Francorchamps started. But as the penultimate round of the 2018/19 WEC season kicked-off, it started to snow again.

It looked like a good platform for the #7 Toyota to challenge the sister #8 crew of Sebastien Buemi, Kazuki Nakajima and Fernando Alonso for the drivers’ championship. But all was undone when the #7 Toyota hit with a brake sensor issue which need a pit stop.

The 11 minutes pit stop out it few laps down to the lead #8 crew which did not have a clean race as well. The tricky conditions caught them out multiple times but they hung on to win the 6 Hours of Spa-Francorchamps WEC race by one lap under red flag.

They completed 133 laps in all with the privateers LMP1 cars getting a rare opportunity to fight for two spots on the lead podium. It looked like the #11 SMP Racing BR Engineering of Stoffel Vandoorne, Vitaly Petrov and Mikhail Aleshin until the final safety car period.

The bunch up allowed the #3 Rebellion Racing Gibson crew of Thomas Laurent Gustavo Menezes and Nathanael Berthon to pass the #11 SMP and finish second with the Russian team finishing third. Fourth place went to the #17 SMP Racing team.

The trio of Sergey Sirotkin, Egor Orudzhev and Stephane Sarrazin finished a lap down with 131 to its name after shedding its front-right wheel early in the race. The #1 Rebellion crew of Neel Jani, Bruno Senna and Andre Lotterer were fifth with 130 laps.

A spin for Senna put them behind. The aforementioned #7 Toyota ended up sixth overall with 129 laps as the #4 ByKolles Gibson finished last, about 38 laps down after a contact with LMP2 category’s #37 Jackie Chan DC Racing Oreca car.

The LMP2 class saw a spirited run by the #31 DragonSpeed Oreca of Pastor Maldonado, Anthony Davidson and Roberto Gonzalez. The final safety car brought Maldonado close to the then top two cars of the #38 Jackie Chan DC Racing and #36 Signatech Alpine.

The ex-F1 driver cleared both to score his and the team’s first WEC win as the #38 crew lost further ground with the pole-sitting #36 G-Drive of Jean-Eric Vergne, Rusinov and Job van Uitert gaining places to finish second eventually.

The #97 Aston Martin Vantage of Maxime Martin and Alex Lynn took victory in the LMGTE Pro class in WEC 6 Hours of Spa-Francorchamps after a back and forth fight, with #51 AF Corse Ferrari of Alessandro Pier Guidi and James Calado ending up second.

The Ferrari duo put themselves in a good position despite a lowly qualifying performance. It benefited from BMW Motorsport opting to pit late which undone its work. Even though the #91 Porsche of Gianmaria Bruni and Richard Lietz took third but they could be penalised.

They were handed a drive-through penalty before the race ended early. If the penalty time is added to its full time, it could mean the sister #92 Porsche of Kevin Estre and Michael Christensen could take third – but for now they are fourth.

The #82 BMW ended up fifth ahead of the pole-sitting #67 Ford. In the LMGTE Am class, the winning honours went to #77 Proton Competition Porsche of Christian Ried, Matt Campbell and Riccardo Pera from the #90 TF Sport Aston Martin.