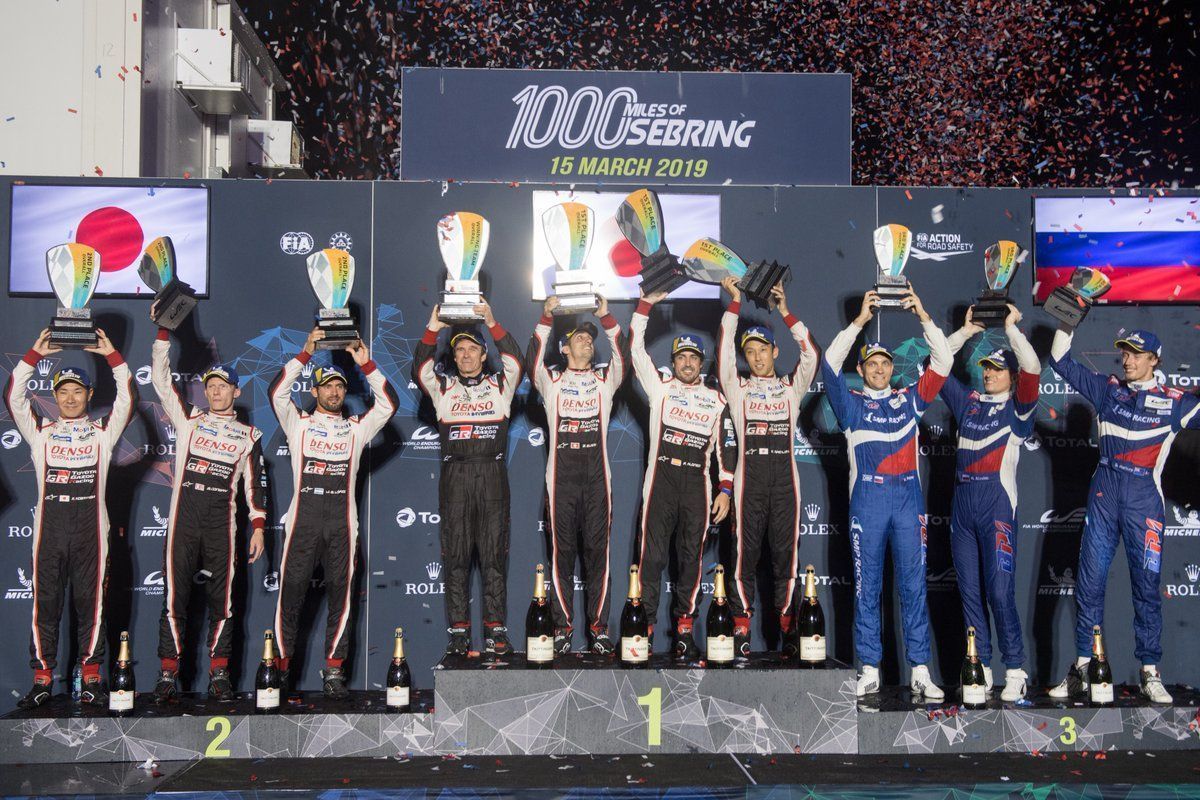 Having started on pole in LMP1, the #8 Toyota stayed in front for whole of the eight hours of racing at Sebring Raceway, especially after the #7 Toyota crew of Jose Maria Lopez, Kamui Kobayashi and Mike Conway had the incident with #90 TF Sport Aston Martin.

Lopez collided with the Aston Martin in Turn 15 which forced the team for a lengthy pitstop where they lost two laps on the leading #8. It recovered enough to end up only one lap down but even a late spin from Nakajima wasn’t enough.

The rain in the last 30 minutes bunched up the field and with a safety car for the last 15 minutes, it was just seeing-through for the #8 crew of Alonso, Buemi and Nakajima, who get their second win of 2018/19 to now lead the points standings.

With #7 Toyota settling for second, the final place on the LMP1 podium went to the #11 SMP Racing BR Engineering crew of Vitaly Petrov, Mikhail Aleshin and Brendon Hartley. It didn’t look like they will after a puncture in the opening stages.

The #3 Rebellion Racing Gibson of Gustavo Menezes, Mathias Beche and Thomas Laurent were looking better placed when both the SMP Racing cars hit trouble but the #3 dropped out after late issues with the car as it ended up seventh overall – in the LMP2 mix.

Both their sister cars did not complete the Sebring 1000 Miles with the #17 SMP Racing crashing out in the second hour at the hands of Egor Orudzhev, while the #1 Rebellion crashed in the fifth hour when Beche ran into a back-marker.

The only other LMP1 car, #10 DragonSpeed Gibson retired due to mechanical issues. This helped the LMP2 class winners, the #37 Jackie Chan DC Racing Oreca’s crew of Jordan King, Will Stevens and David Heinemeier Hansson ending up fourth overall.

Their first race together ended up in a win as they managed to defeat sister #38 and the pole-sitting outfit which ended up 29th and last after electrical issue. The #36 Signatech Alpine crew of Nicolas Lapierre, Pierre Thiriet and Andre Negrao finished second.

The #31 DragonSpeed Oreca drivers Anthony Davidson, Pastor Maldonado and Roberto Gonzalez completed the podium but finished a lap down with #50 Larbre Competition Ligier and #29 Racing Team Nederland Dallara in fourth and fifth.

A late crash for #28 TDS Racing Oreca in treacherous conditions brought out the safety car which meant all the five competitive finishers in the LMP2 class were inside the overall Top 10 of Sebring 1000 Miles with #38 last.

The late rain caused for a lead change in LMGTE Pro class with the #91 Porsche GT Team’s Gianmaria Bruni and Richard Lietz scoring a win over the #81 BMW crew of Martin Tomczyk, Alexander Sims and Nicky Catsburg.

BMW looked all good to score its first WEC victory in Sebring 1000 Miles but it wasn’t to be as the tyre change when the rain arrived aided the Porsche to get ahead. In third was #67 Ford Chip Ganassi of Jonathan Bomarito, Harry Tincknell and Andy Priaulx.

They were classified 10th, 11th and 12th respectively in the overall standings. The Top 5 in the class was rounded out by #51 AF Corse Ferrari and #92 Porsche with the leading #63 Corvette and #97 Aston Martin in eighth and ninth respectively.

Over in the LMGTE Am class, pole-sitter #77 Dempsey-Proton Porsche crew of Matt Campbell, Julien Andlauer and Christian Ried scored the win over #54 Spirit of Race Ferrari and #56 Team Project 1 Porsche.