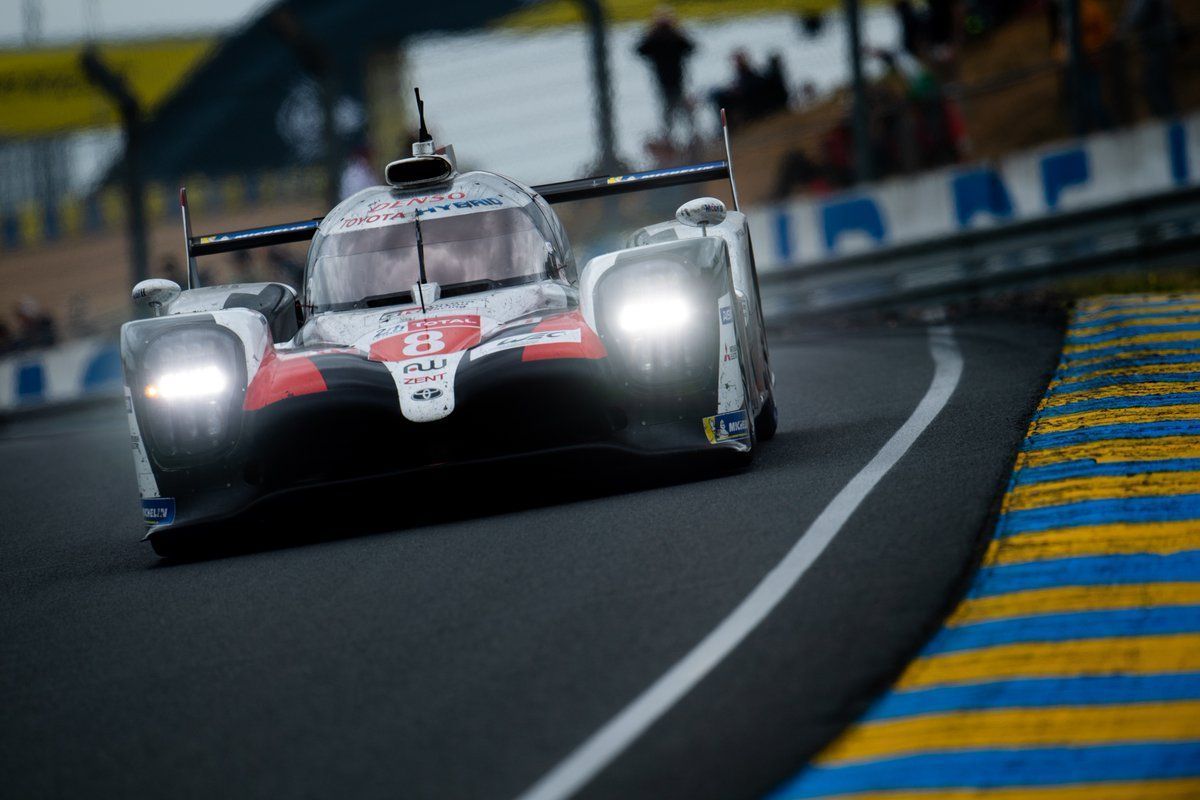 It was looking good for the #7 Toyota crew of Kamui Kobayashi, Mike Conway and Jose Maria Lopez until the final hour when Lopez was forced to pit in an unscheduled stop due to a right rear puncture, which sealed its unfortunate fate in the race.

The #7 crew looked solid all-race long despite some hiccups with the #8 Toyota crew of Sebastien Bumei, Fernando Alonso and Kazuki Nakjima shadowing them. But luck favoured them to eke out a second straight Le Mans 24 Hours win and also win the WEC honours.

The trio sealed the drivers’ title in the LMP1 class as Alonso took his third FIA crown, Buemi his second and Nakajima his first. It was heartbreak for Kobayashi, Conway and Lopez though as the #7 crew dedicated the win to the #8 drivers.

Third place in the overall podium went to the #11 SMP Racing BR Engineering crew of Vitaly Petrov, Mikhail Aleshi and Stoffel Vandoorne as the Russian team finished six laps down on the leading Toyota. The team had a trouble-free run in the race.

More importantly, they saw-through the charge from Rebellion Racing Gibson cars with the #1 crew of Neel Jani, Bruno Senna and Andre Lotterer in fourth – nine laps down and ahead of the sister #3 crew of Gustavo Menezes, Thomas Laurent and Nathanael Berthon.

They were six laps down on the #1 Rebellion though after crashes for Laurent and Menezes – while the former did not lose enough time but the latter’s hit beached the car in the gravel which cost them all the time and put them out of the podium fight.

That was it for the LMP1 class though as #17 SMP Racing’s Egor Orudzhev crashed out heavily which ended their chances along with Sergey Sirotkin and Stephane Sarrazin. There were retirements for both #4 ByKolles and #10 DragonSpeed.

The LMP2 category saw a dominant win for #36 Signatech Alpine’s Nicolas Lapierre, Andre Negrao and Pierre Thiriet to make it a double after inheriting it last year, as the team also sealed the 2018/19 WEC class championship.

The win was made also possible due to the wiring issues to the #26 G-Drive Racing Oreca of Jean-Eric Vergne, Roman Rusinov and Job van Uitert which dropped them to sixth, as #38 Jackie Chan DC Racing Oreca of Ho-Pin Tung, Gabriel Aubry and Stephane Richelmi.

Pole-sitter’s #28 TDS Racing Oreca of Loic Duval, Francois Perrodo and Matthieu Vaxiviere completing the podium positions with #38 car a lap and #28 two laps down on the winning #36 car. The #22 United Autosports and #48 Idec Sport crew were fourth and fifth.

Four cars failed to finish in the LMP2 class from the 20 with the #31 DragonSpeed of Pastor Maldonado, Anthony Davidson and Roberto Gonzalez and the #37 Jackie Chan DC Racing’s David Heinemeier Hansson, Jordon King and Ricky Taylor among them.

The #51 AF Corse Ferrari’s James Calado, Alessandro Pier Guidi and Daniel Serra took the win in the LMGTE Pro class after it soon became a two-way fight between the #51 and #63 Corvette Racing’s Antonio Garcia, Jan Magnussen and Mike Rockenfeller.

The latter though lost time in the pits with three hours remaining and Magnussen spun towards the end which hampered his podium chances as it eventually finished ninth. Its sister #64 of Marcel Fassler, Oliver Gavin and Tommy Milner crashed out early.

Even though the #92 Porsche of Kevin Estre and Michael Christensen were only 10th in the class, the duo took the WEC title honours for the 2018/19 season. Meanwhile, it wasn’t the Le Mans 24 Hours for both BMW and Aston Martin – both outside the Top 10.

The trio still were able to seal the title as #84 JMW Motorsport Ferrari of Rodrigo Baptista, Jeff Segal and Wei Lu completed the podium position from #62 WeatherTech Racing Ferrari and #77 Dempsey-Proton Racing Porsche in the Top 5.