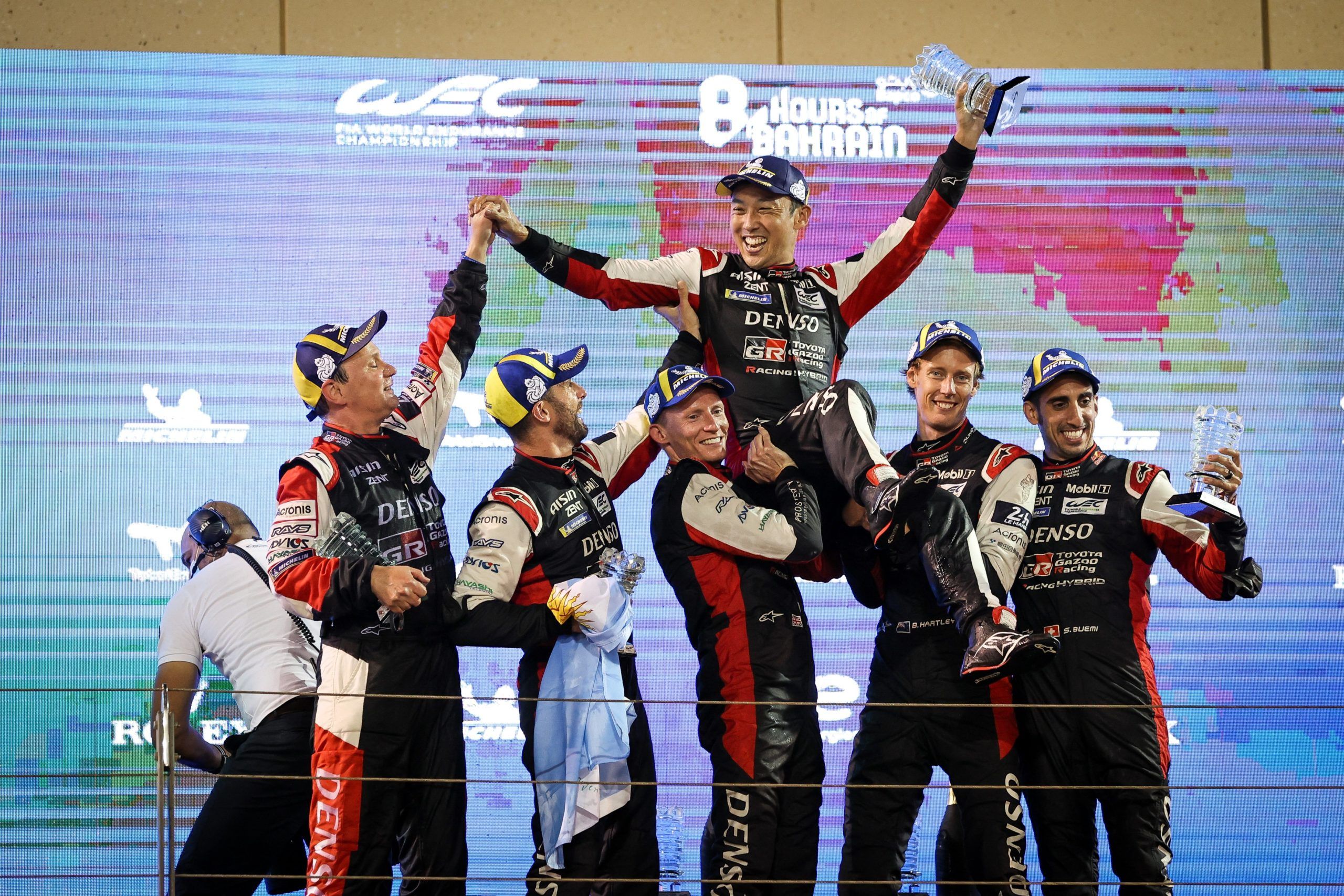 #8 Toyota took the FIA WEC 8 Hours of Bahrain win from #7 crew in the Hypercar category, but the latter were crowned the drivers’ champions.

It has been a near-perfect year for Toyota Gazoo Racing as last week the Japanese team claimed the first-ever Hypercar World Endurance Championship title with one round of the season still remaining. They also become the first team in WEC history to maintain a 100% win rate in a season. Going into today’s race, it was an outright duel between the No. 7 and No. 8 sister cars as both crews were separated by 16 points – the former having the advantage and needing only to finish in the top three in order to become champions.

The race eventually went the way of the No. 8 car after Sebastien Buemi, Brendon Hartley and Kazuki Nakajima put in a near-perfect performance at the wheel of the Toyota GR010 Hybrid Hypercar. During the race itself, pole-sitter Conway led the early stages but handed the position over to the sister car in the second hour.  The No. 8 car went on to finish the race 7.35s ahead of the No. 7 car.

It was a fitting end to Nakajima’s WEC career as the Japanese driver crossed the finish line to increase his WEC victories to 17. Nakajima has been part of Toyota’s WEC team since the very first test of the TS030 Hybrid in January 2012. Alpine Elf Matmut finish second in the Hypercar World Endurance Championship with a total of 108 points. Today’s race started superbly for the French team, with Nicolas Lapierre passing Buemi and pole-sitter Mike Conway through the opening few corners.

However, Lapierre was soon overtaken by both Toyotas before a gearbox issue forced a lengthy pitstop for the No. 36 car on the 25th lap.  As a result, the Alpine A480 Gibson lost three laps as the team worked hard to fix the issues. The French squad (Lapierre, Andre Negrao and Matthieu Vaxiviere) did a good job of fighting back up the leaderboard through the remainder of the race, eventually finishing P3 and four laps down on the race winners.

The FIA Endurance Trophy for LMP2 Teams was fiercely fought over this season but eventually went to Team WRT after a spectacular debut season in the WEC for the Belgian-based squad. Team WRT were just five points ahead of rivals JOTA going into today’s race so it was all to play for in today’s season finale. However, Team WRT’s Ferdinand Habsburg, Charles Milesi and Robin Frijns once again put in a superb performance in the No. 31 Oreca 07 Gibson to take a third consecutive victory.

Team WRT’s LMP2 title ensured they became the first Belgian team to take a WEC title, and also means that Frijns is the first Dutch champion in LMP2 history. It also rounds off a dream season for the squad which has seen them claim the ELMS title, as well as the LMP2 victory at this year’s 24 Hours of Le Mans. During today’s race itself, however, it was Racing Team Nederland who emerged as early race leaders as Giedo Van Der Garde once again got off to a rapid start where he remained out in front for the first two hours.

The No. 38 and No. 28 JOTA cars finished today’s race second and third overall, the No. 38 car driven by Antonio Felix da Costa, Anthony Davidson and Roberto Gonzales eventually finishing over a minute behind race winners Team WRT.  It was a particularly emotional race for Davidson who announced earlier this week he would retire from the WEC following a 22 year racing career.

The No. 28 JOTA car’s third place finish today saw Stoffel Vandoorne, Sean Gelael and Tom Blomqvist finish runner-up in the LMP2 title-fight, twenty points adrift of champions Team WRT. Last year’s LMP2 Champions United Autosports finished P4 in today’s race and end the season fourth in the overall leaderboard. The No. 22 crew made up of Filipe Albuquerque, Fabio Scherer and Phil Hanson started today’s race on pole but eventually finished four seconds down on the No. 38 JOTA crew.  They end the season with a total of 107 points.

Fifth in today’s race and also fifth in the LMP2 standings at the end of the season was Inter Europol Competition, the Polish squad proving to be consistent throughout the year with its trio of drivers Jakub Smiechowski, Renger Van der Zander and Alex Brundle – the latter who recently confirmed he will remain with the squad for 2022.

In the first-ever LMP2 Pro-Am title, Racing Team Nederland secured the trophy after the Dutch squad finished first in class today and sixth out of the 11 LMP2 entrants. However, it was only Frits Van Eerd claims the drivers’ title after his teammates Giedo van der Garde and Job van Uitert both missed one WEC round each this season (Monza). Realteam Racing finish the year second in Pro/Am, the Swiss squad 21 points behind their Dutch rivals.

The No. 51 AF Corse Ferrari is the provisional winner of the GT Manufacturers’ FIA World Endurance Championship after a dramatic finale which saw Porsche and Ferrari fighting tooth and nail throughout today’s 8 hour race. Both the No. 51 Ferrari 488 GTE Evo and the No. 91 Porsche 911 RSR – 19 were locked in an enthralling battle with the No. 51 making contact with the Porsche in the race’s final 15 minutes.

Pier Guidi eventually held onto the win, crossing the finish line first to become provisional champion alongside James Calado.  However, an investigation is currently underway after Porsche filed a protest following the end of the race. Currently in P2 is the Porsche driven by Kevin Estre, Neel Jani and Michael Christensen. The No. 52 AF Corse Ferrari driven by Miguel Molina and Daniel Serra finished today’s race in third position ahead of No.91 Porsche 911 RSR of Gimmi Bruni, Richard Lietz and Frederic Makowiecki.

The No. 83 AF Corse Ferrari crew took the 2021 LMGTE Am title in style as Alessio Rovera, Nicklas Nielsen and Francois Perrodo won today’s race in Bahrain. It is the team’s fourth victory of the season and sees the team successfully defend its GTE Am title as they finish the year 59.5 points ahead of TF Sport who had a troubled race today from start to finish.

Indeed, TF Sport were the only team who could really challenge AF Corse Ferrari today but were knocked out of contention when the No. 33 car incurred a puncture on the opening lap caused by contact with the No. 98 Aston Martin Racing car. TF Sport did a super job of fighting back after the incident but a further collision with the No. 54 AF Corse Ferrari later in the race resulted in a broken steering rack and dashed any hopes of a chance at the title.  The team eventually retired after spending more than 90 minutes in the pits making repairs to the Aston Martin Vantage AMR.

The No. 77 Dempsey Proton Racing Porsche belonging to Matt Campbell, Jaxon Evans and Christian Ried finished runner-up in Bahrain today and also finished third in the overall standings. Rounding out today’s podium was the No. 56 Team Project 1 Porsche of Egidio Perfetti, Riccardo Pera and Matteo Cairoli, the crew making a good recovery following a one minute penalty earlier in the race.

Pole-sitters Cetilar Racing finished today’s race fourth overall, the Italian squad was hit earlier in the race by the No. 777 D’Station Aston Martin driven by Tomanobu Fuji who was given a drive-through-penalty as a result. Elsewhere, the No. 88 Dempsey Proton Porsche retired early in the race as Axcil Jefferies spun and was unable to restart due to a mechanical issue.

[Note: The above is as per press release from FIA WEC with no edits made]