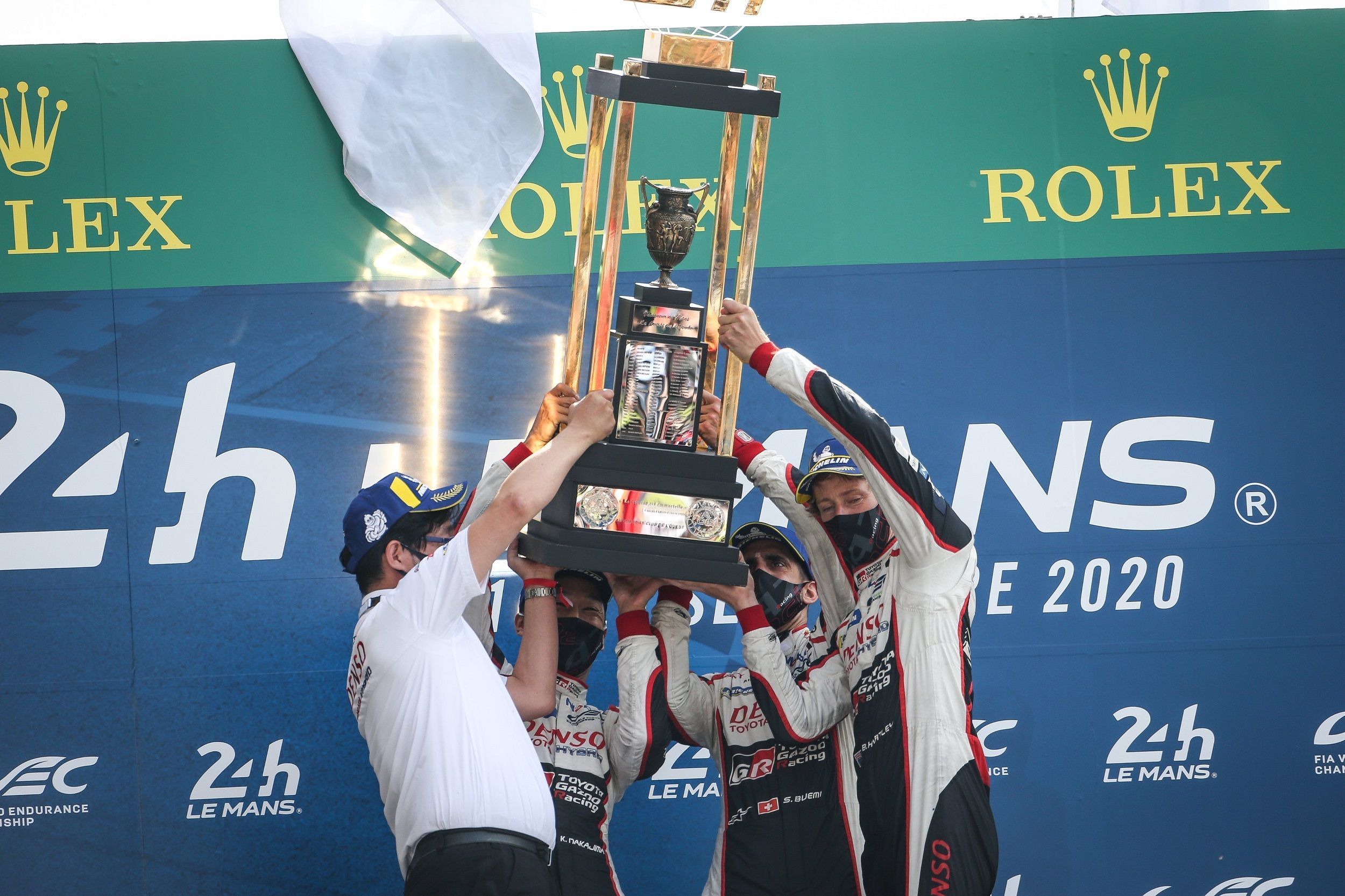 Even with no crowd, it was a topsy-turvy WEC Le Mans 24 Hours as #8 Toyota crew of Sebastien Buemi, Kazuki Nakajima and Brendon Hartley were victorious in LMP1 class – a third straight one for this side of the garage, this time with the Kiwi driver.

Buemi and Nakajima had it with Fernando Alonso in 2018 and 2019. For Hartley, it is his second WEC Le Mans 24 Hours win after getting it with Porsche in 2017. It was a commanding one as they won it by five laps over #1 Rebellion.

The trio of Gustavo Menezes, Bruno Senna and Norman Nato did not have it easy as the #1 Rebellion dropped out of the WEC Le Mans 24 Hours win fight due to nose change. They were clear of pole-sitter #8 Toyota of Kamui Kobayashi, Mike Conway and Jose Mario Lopez.

The #8 crew had another difficult time with mechanical issues and floor damage troubling them again, which left them only third, six laps behind sister #7 Toyota. The #3 Rebellion looked like to secure a double podium for the privateer outfit.

But clutch fix for Louis Deletraz, Romain Dumas, Nathanael Berthon left them only fourth, a lap behind #1 Rebellion. The only other LMP1 car of #4 ByKolles retired late on Saturday night due to a crash for Bruno Spengler at the Esses.

The LMP2 fight, meanwhile, went right down the wire as pole-sitter #22 United Autosports Oreca of Paul di Resta, Filipe Albuquerque and Phil Hanson, took control of the race when sister #32 faced oil leak as it became a two-horse fight with #38 Jota Sport Oreca.

The #38 crew of Antonio Felix da Costa, Anthony Davidson and Roberto Gonzalez pressured the #22 but they escaped their clutches to win the WEC Le Mans 24 Hours in their class. Meanwhile, the fight for third changed hands later in the race.

The #26 G-Drive Aurus-badged Oreca of Roman Rusinov, Jean-Eric Vergne and Mikkel Jensen held the position despite electrical issues on Saturday night. They were going well until a suspension issues which dropped to fifth in the order.

This helped #31 Panis Racing Oreca of Mathieu Vaxiviere, Julien Canal and Nico Jamin to third as a late crash for #39 Graff Oreca with about 30 minutes remaining, helped the #36 Signatech Alpine Oreca to be fourth after they survived a water leak issue.

It was a respectable finish for the all-women LMP2 crew of Tatiana Calderon, Sophia Floersch and Beitke Visser in the #50 Richard Mile Oreca, as the trio finished 13th overall and were ninth in their category on their first attempt.

The #97 had it under control to eventually to win the WEC Le Mans 24 Hours Pro category over #51 as the duo were comfortably ahead of third-placed #95 Aston Martin of Marco Sorensen, Nicki Thiim and Richard Westbrook.

There was late drama behind as a broken gearbox for fourth-placed #71 AF Corse Ferrari dropped them way behind as #82 Ferrari were promoted to fourth as pole-sitter crew of #91 Porsche rounded out the Top 5, having endured a disastrous run.

Over in the LMGTE Am class, the #90 TF Sport of Jonathan Adam, Charlie Eastwood and Salih Yoluc made it double for Aston Martin in GT category as they headed the #77 Dempsey-Proton Porsche and #83 AF Corse Ferrari of Nicklas Nielsen in late change.