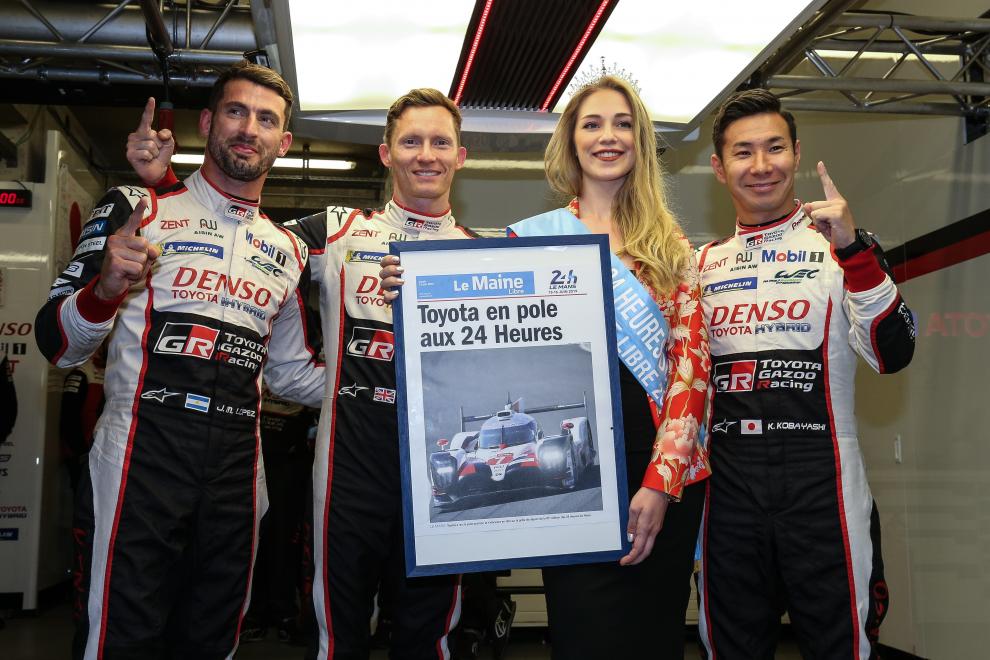 At the completion of the three qualifying sessions, #7 Toyota TS050 Hybrid of Kamui Kobayashi, Mike Conway and Jose Maria Lopez took pole in LMP1 for the 2019 Le Mans 24 Hours race – which is also the final race in the 2018/19 WEC season.

Kobayashi’s Q2 time of 3m15.497s was enough for the Japanese manufacturer to take pole ahead of the #8 Toyota of Kazuki Nakajima, Sebastien Buemi and Fernando Alonso as the #17 SMP Racing BR Engineering were third by just 0.251s.

Whether the conditions played a role or not but it was a mighty effort from Stephane Sarrazin, Sergey Sirotkin and Egor Orudzhev to be so close to the hybrid car in a non-hybrid machine. The #3 Rebellion Racing Gibson were not far off as well.

The trio of Thomas Laurent, Gustavo Menezes and Nathaneal Berthon ended up fourth with the Top 4 within a second of #7 Toyota’s time. They headed #11 SMP Racing of Vitaly Petrov, Mikhail Aleshin and Stoffel Vandoorne in fifth.

It wasn’t easy for Rebellion Racing as both cars suffered engine issues in qualifying. Meanwhile, it was close in the LMP2 class as well with #39 Graff Oreca of Vincent Capillaire, Jonathan Hirschi and Tristan Gommendy taking pole.

However, the pole was taken away after they failed to stop at weighing bridge at the end of the session. It dropped them to 22nd overall and 14th in the LMP2 class after its best time was deleted. This handed pole to #28 TDS Racing Oreca for the 2019 event.

The trio of Loic Duval, Francois Perrodo and Matthieu Vaxiviere headed the pack then after Duval’s quick time with #31 DragonSpeed Oreca of Pastor Maldonado, Anthony Davidson and Roberto Gonzalez in second from #36 Signatech Alpine.

The #36 has Nicolas Lapierre, Andre Negrao and Pierre Thiriet in the car as the Top 5 in the LMP2 class was then rounded out by #48 Idec Sport Oreca and #26 G-Drive Racing Aurus outfits.

They have Andy Priaulx, Jonathan Bomarito and Harry Tincknell in the car as third place went to #63 Corvette Racing of Antonio Garcia, Jan Magnussen and Mike Rockenfeller, with #91 Porsche GT Team and #82 BMW Team MTEK rounding the Top 5.

Meanwhile, in LMGTE Am, it was a Porsche 1-2-3 with #88 Dempsey-Proton Racing’s Matteo Cairoli, Satoshi Hoshino and Giorgio Roda on pole from sister #77 car’s Julien Andlauer, Christian Ried and Matt Campbell.

The #86 Gulf Racing of Ben Barker, Thomas Preining and Michael Wainwright was third to make it a successful WEC Le Mans 24 Hours qualifying for the German team, with #86 JMW Motorsport Ferrari in fourth ahead of #78 Proton Competition Porsche in Top 5.

#WEC #LM24 That's it !! Final qually for the @24hoursoflemans and here are the provisional results. #MsportXtra pic.twitter.com/U9Cv2eSoTb

UPDATE: Click here to check the results after the penalties were applied.