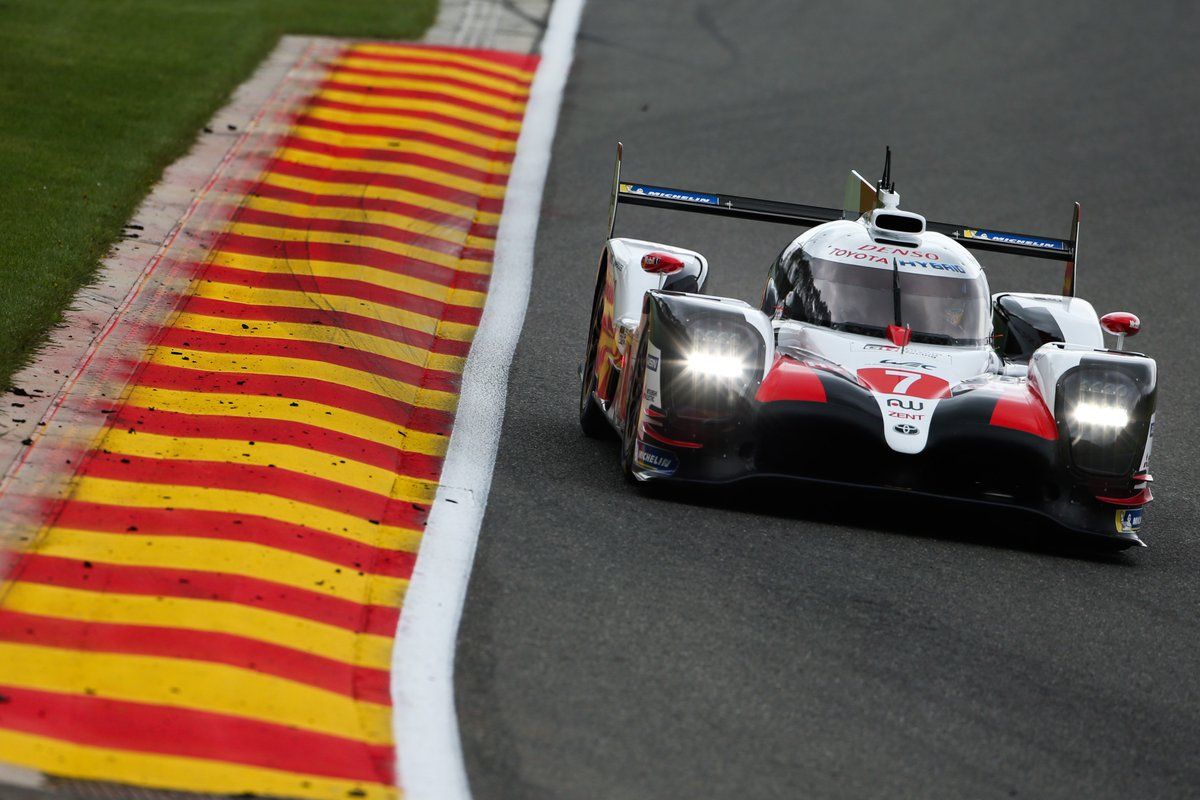 The session was disrupted by a red flag with over four minutes remaining after the #4 ByKolles came to a halt with their new Gibson machine. The Swiss team was anyways in a bit of trouble as it was only 12th in the standings – right in the mix of the LMP2 cars.

Once the car was cleared, there was a re-start but none from LMP1 ventured out with the two Toyota checking out the front-row as expected with the #7 crew of Jose Maria Lopez, Mike Conway and Kamui Kobayashi securing Spa WEC pole with a 1m53.747s lap.

They beat its sister #8 Toyota crew of Sebastien Buemi, Kazuki Nakajima and Fernando Alonso by 0.496s after they did a 1m54.243s. The #17 SMP Racing BR Engineering of Sergey Sirotkin, Egor Orudzhev and Stephane Sarrazin ended up third overall.

The Russian outfit did well to be under a second of the pole-sitter with a 1m54.711s lap. It led the #3 Rebellion Racing Gibson of Gustavo Menezes, Thomas Laurent and Nathanael Berthon with the #11 SMP Racing in fifth with Stoff Vandoorne making his WEC debut.

The LMP2 category had the #26 G-Drive Racing on pole from the pair of Jackie Chan DC Racing Oreca cars with the #38 ahead of #37 as the Top 5 was rounded out by #31 DragonSpeed and #36 Signatech Alpine.

The pole fight in the LMGTE Pro class for WEC 6 Hours of Spa-Francorchamps intensified with three manufacturers in play as Ford, Aston Martin and BMW going head-to-head. The #82 BMW took provisional pole with an average of 2m12.977s lap.

However, the German manufacturer’s duo of Antonio Felix da Costa and Agustuo Farfus were relegated to third as they were beaten by the #97 Aston Martin pair of Alex Lynn and Maxime Martin, who set an average of 2m12.952s lap.

The pole eventually went to the #67 Ford of Harry Tincknell and Andy Priaulx as they set a 2m12.885s in a last-gasp effort. While the Top 3 ended up in the order of Ford, Aston Martin and BMW, it was reverse for fourth, fifth and sixth respectively.

The #81 BMW slotted in fourth with the #95 Aston Martin in fifth and the #66 Ford in sixth. Behind them, the leading #92 Porsche and #51 Ferrari were only seventh and ninth respectively to complete the run of five manufacturers.

Over in the LMGTE Am category, the #90 Aston Martin of Charlie Eastwood, Salih Yoluc and Euan Hankey took pole from #88 Porsche of Matteo Cairoli, Giorgio Roda and Gianluca Roda and #56 Porsche of  Jorg Bergmeister, Patrick Lindsey and Egidio Perfetti.