Home Rally Dakar Walkner the fastest of stage 3, Barreda still on the lead 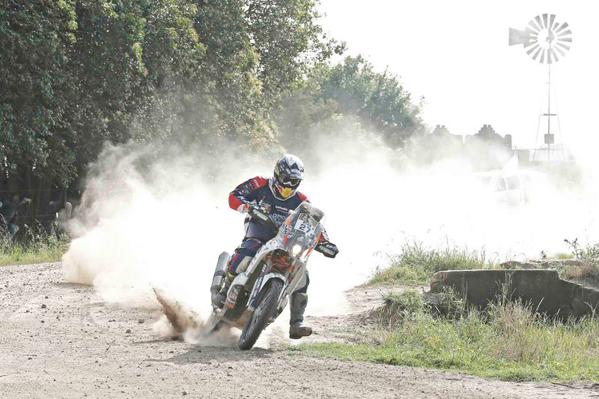 The stage 3 of the 36th Dakar in motorcycle was a quiet day. Barreda keeps the leadership as Marc Coma closes in, but the surprise of the day was Matthias Walkner who was the fastest on stage 3 between San Juan and Chilecito in a 220 km of special.

The 28 years-old, Matthias Walkner took advantage of one of the smallest stages of the Dakar to attack. The Austrian rider of KTM is consolidated as one of young promises of this 2015 Dakar.

Regarding the battle for the Dakar title, Coma has close in some time that he lost yesterday, the 2014 champion is now on fourth place of the standings.

Toby Price is another of the young promises in motorcycle category. The Australian rider stays in the battle for top3 after this 3 stages. Not the same for one of the favorites, the Portuguese Paulo Gonçalves. The KTM rider lost 3 minutes from Walkner today, but he still on second place in the standings, 5 minutes behind Barreda.

Tomorrow’s stage will be an important one after the break of today. The 315 kilometers from Chilecito to Copiapó will give to us such an incredible images for all the fans.

“Today was easier than yesterday, but anyway, it was really dangerous because we were on river beds and a lot of stones all day and so many broken up tracks. So that was sometimes dangerous and you always need to take care. I felt really good all day opening the track, it was a good feeling. I’m really happy, it’s one day more done. Now we go to Chile and there will be different stages and a different feeling so we will see there. The advantage is really small, it’s nothing different. We need to remain focused on our planning, so nothing is different, we’ll continue like this”.

I wanted to come back with a bang today, to be able to lay firm foundations for the rest of the race. I’m still suffering due to yesterday’s problems, because I was stuck for 50 km in the dust of another rider and that’s what stopped me overtaking Pedrero in the general standings. It’s a pity. Physically, it’s going to be tough tomorrow, because we’ll have to cross the Andes Mountains. In spite of it all, I’m in keeping with my plan and right on course for what I’ve got planned for the finish. I’m not going to give away my race tactics, but I have got a plan. I haven’t really targeted tomorrow’s stage. It’s not important because there won’t be any major gaps, but it’s important to grab a good place to be in a good situation for the day after”.

“I’ve won it for the moment, but there are just five riders who arrived, I think. Marc is coming, Sam is coming, some fast guys are coming, so we will see. The riding was not so bad. I made some little mistakes because it was a little bit dangerous today with many stones and it forced you over the limit, but overall it was quite good. It’s cool, but he went out in front. The important thing in rallying is to navigate well or open the tracks and also be fast. We will see. It’s my first rally and I hope I can enjoy it. After this we can see what the future brings. I’m just doing my best, finding my rhythm and taking it every kilometre by kilometre. I know a little bit about how you have to ride the motorcycle from doing moto-cross, but the different part is the navigation and finding the good way to ride safely, to not make mistakes and go fast”.