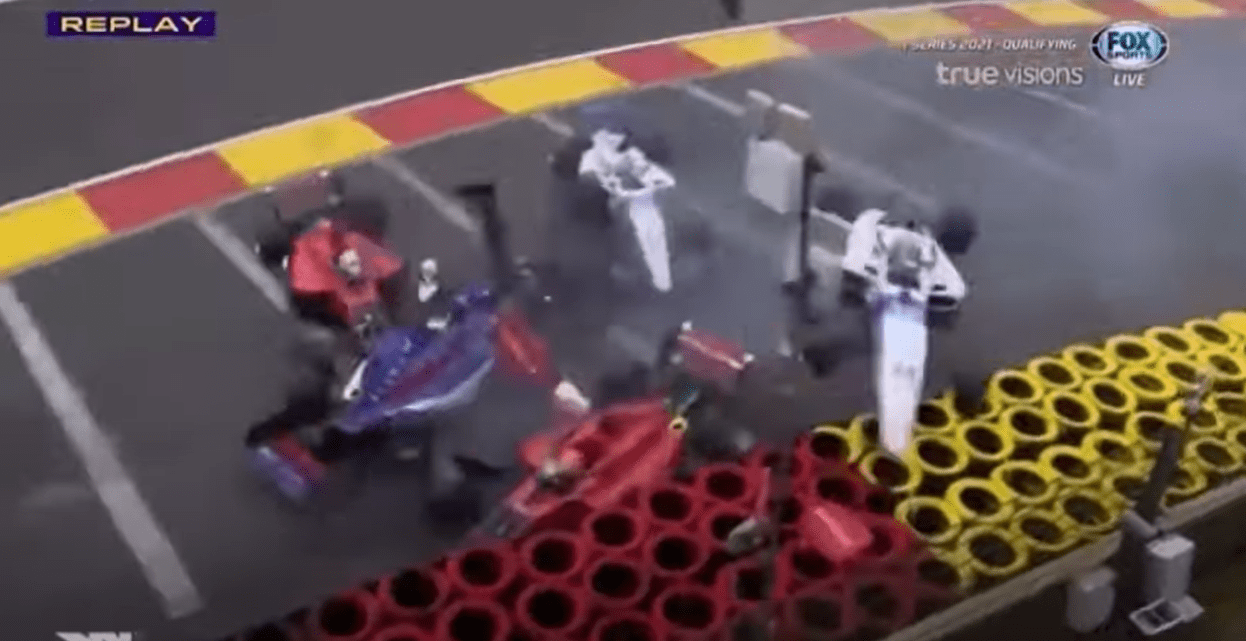 The W Series qualifying at Spa-Francorchamps was stopped after six cars crashed out at the much-talked Eau-Rouge-Raidillon corner.

The rain made it damp conditions at Spa-Francorchamps, but a six-car pile-up at Eau Rouge-Raidillon was certainly not a desired situation. It involved Beitsike Visser, Ayla Agren, Sarah Moore, Abbie Eaton, Belen Garcia and Fabienne Wohlwend.

Initially, W Series did not air the footage, but once it was declared that they are safe enough, the world feed showcased the video. The first to spin out was Moore, who lost the rear of the car and fired into the barriers. One by one others followed her.

Like the other incidents in the past, the cars did bounce off the barriers, but not enough for others to hit them like seen in the GT accident and or F2. Eaton and Visser were upwards and upside-down, respectively, as the drivers were caught out by damp conditions.

There was extensive damage as the session resumed after a delay, where Jamie Chadwick took pole. While the likes of Moore, Eaton, Garcia and Wohlwend were fine and back in their garage, Visser and Agren were sent to the hospital for further checks.

“All drivers involved in the incident are undergoing medical assessment and two of the drivers – Ayla Agren and Beitske Visser – have been transferred to hospital for further checks. More updates to follow,” a statement from W Series stated.

The current incident follows on from a heavy crash during the Spa 24 Hours race, which injured Jack Aitken. The incident took place at the same corner which is not too far off from the horrific F2 crash, which took the life of Anthoine Hubert.

Much has been said about the track, especially the corner, with Callum Ilott being a leading voice for some time now. In a response to a tweet from Kevin Estre, the Brit stated: “My only addition to this would be the angles of the barriers on the right and the position of the barriers on the left. The two accidents recently have been caused by cars bouncing back in from the barrier on the left. Instead of a one car crash it becomes multiple and more risk.”

Earlier on, he had more to say: “If I’m wrong for chasing for better safety after seeing 4 of my friends involved in massive accidents then I may as well not be human. I’ve come back to spa after 2019 and I will come back again after this. But that doesn’t mean if something isn’t good enough it shouldn’t be fixed.”

Here’s more from Moore and Eaton:

After a dramatic incident involving six drivers during today's #WSeriesSpa qualifying session, the whole W Series family was shocked to the core.

We spoke to two of the drivers involved, Sarah Moore and Abbie Eaton to hear more about the accident. #WSeries pic.twitter.com/SDeKR1LX6i

UPDATE: W Series stated that Agren was released from the hospital, while Visser stayed back to get the leg X-Ray result. Nevertheless, she herself tweeted about her well-being at the hospital.

“Ayla Agren has been discharged from hospital. Beitske Visser is still in hospital – a CT scan has revealed no injuries. She is still awaiting the results of a leg X-ray but is in good spirits and discussing the accident,” statement from W Series read.

Thank you all for your messages❤️ that was a very scary one but I think I had an angel on my shoulder, I’m very sore but luckily I have no fractures🙏 pic.twitter.com/j2AyJzav80