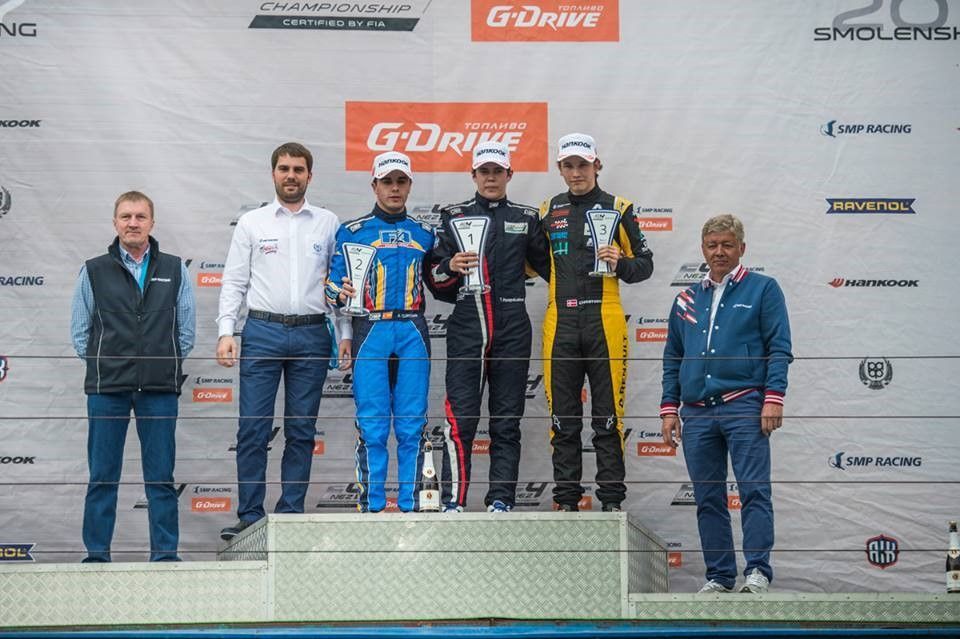 If yesterday race was interesting, so was Sunday first race. Juuso Puhakka jumped the start and had to serve a drive-through penalty later in the race, dropping him out of the battle, and the Finn was eventually disqualified for incidents on track.

Guillem Pujeu got bumped by Sami-Matti Trogen after T2 and had to retire from the race, a very difficult weekend for FA Racing driver’s rookie. Vladimir Tziortzis, Milen Ponomarenko and John Peters all had to retire early in the race forcing the safety car to be deployed.

Nikita Volegov was able to capitalize the opportuny and took his first victory of the season after a breath-taking battle on the final lap against Xavier Lloveras and Alexander Smolyar. Lloveras squeezed by Smolyar while the Russian was battling against Volegov for the lead of the race, and took P2, gathering important points for the championship.

Russian Mike Belov completed a wonderful race for the Russians by taking P4, his best ending position in single-seater. On MP Motorsport side, Bent Viscaal finished in P5 just ahead of his teammate Christian Lundgaard whom he overtook after the restart. Race 3 pole-sitter, Tuomas Haapalainen, brought his car home in P7 and Gulhuseyn Abdullayev scored his first point of the season by completing the top 8 of this short race.

Last race of the weekend was exciting from start to finish. Despite Haapalainen taking a lights-to-flag victory, Lloveras, Lundgaard, Smolyar and Puhakka closely chased him down.

The Spaniard tried to overtake Haapalainen a few times but he just could not find any space, keeping the gap to the Finn under 0.3 all along the 25’+1lap race. Lundgaard finished P3 allowing Lloveras to leave Smolensk as the new leader of the 2017 SMP F4 NEZ Championship by four points.

SMP Racing driver, Alexander Smolyar, crossed the finish line P4 and Puhakka recovered after his disqualification in Race 2 to get P5. Race 2 winner Volegov ended Race 3, holding onto P6, in front of Estonian Jan-Erik Meikup. After going wide during the first lap, Viscaal finished P8 ahead of Tziortzis whom he overtook in the inside of T1 in a clean move. After a difficult weekend, due to mechanical issue, Elias Niskanen scored his first point of the season by taking P10.

That concludes 2017 SMP F4 NEZ Round 2 in Smolensk and the whole championship is coming back to Europe for its third back-to-back event, on Finnish circuit of Ahvenisto, June 2-4.