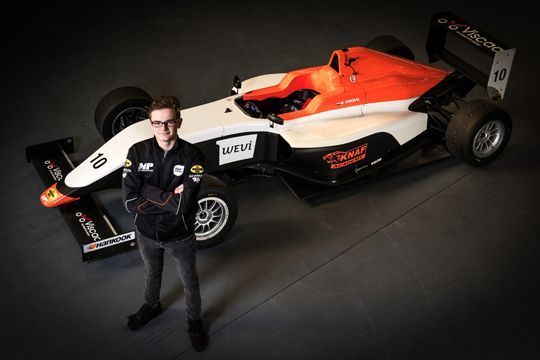 Bent Viscaal is the Dutch ace in the pack in the 2017 SMP F4 NEZ Championship, having just been announced as a KNAF Academy pupil. In recent years, the 17-year-old made a name for himself in the German karting world, ending up champion in the 2015 German FK Junior Championship with KSM Schumacher Racing Team, the team owned by Ralf Schumacher. Last year, Viscaal finished sixth in the CIK-FIA European OK Championship while taking ninth in the WSK Champions Cup for OK karts.

In the same OK WSK Champions Cup, Christian Lundgaard took third in the final standings in 2016. Also run by Ricciardo Kart in the CIK-FIA European OK Championship, Lundgaard finished 11th, while also winning the Danish championship. The 15-year-old joins the SMP F4 NEZ Championship certified by FIA with the support of the Danish federation. In 2015, the young Dane became European Champion in the KF Junior category.

“I am looking forward to race in the 2017 SMP F4 NEZ Championship, and it is even more exciting as it will be my first year in single-seater. I think it is going to be a close championship, with many good drivers, I really can’t wait to start”

16-year-old Tristan Charpentier arrives in the SMP F4 NEZ Championship with two years of motor racing experience. The Frenchman finished fifth in last year’s French F4 Championship while in 2015 he raced in the Ginetta Junior Championship.

“I am sure this year will be a great one. A new car to discover, with new circuits to learn and new drivers to compete against. For sure, this season, my aim is the title and I am looking forward to have a great season with a lot of positive results”

Lukas Dunner (15) from Austria steps up from karting’s Rotax Max ranks. Last year, Dunner finished fourth in the Rotax International Open for junior drivers. In 2015, Dunner competed in both the Euro Challenge and BNL Karting Series – both in the Rotax Max Junior category. In the European Mini Max final of 2014 the Austrian took second place.

“I can’t wait for the racing to get underway. We are well prepared, and the rest is yet to come. I have to practice patiently as I have a lot to learn. My aim is to learn and to be able to fight for the wins at the end of the season”

The 2017 SMP F4 NEZ Championship will start its third year with a seven stages season. The calendar will be released soon.