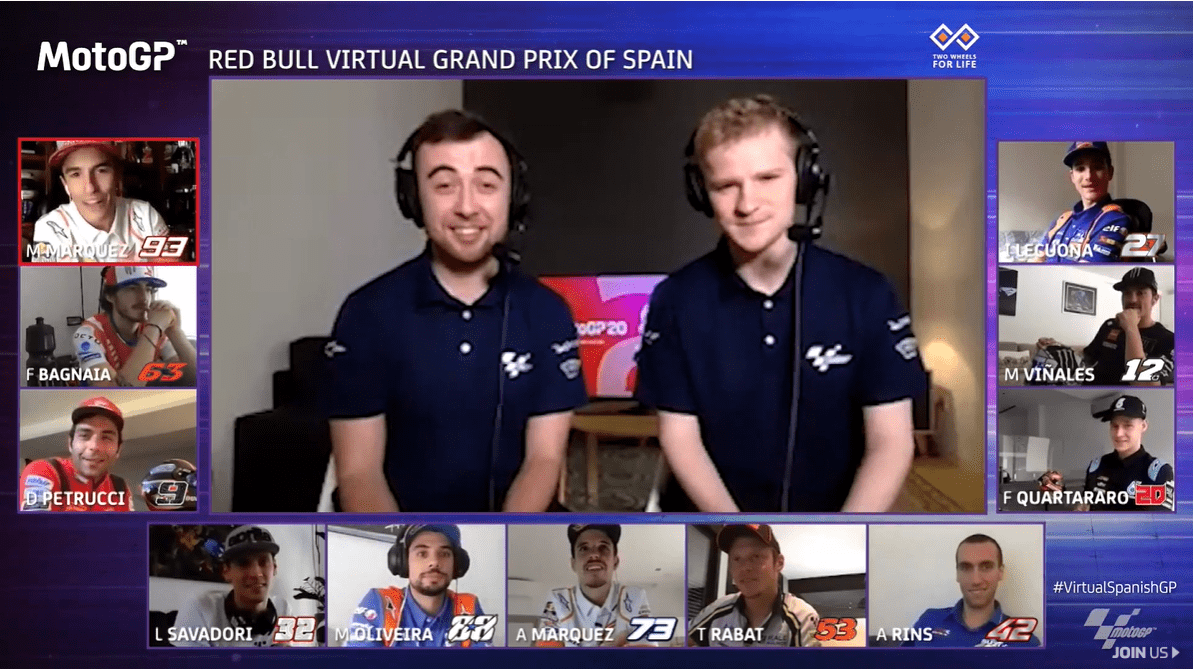 MotoGP hosted its third Virtual Spanish GP – dubbed as #StayAtHomeGP – at Jerez alongside Moto2 and Moto3 with Maverick Vinales winning in premier class.

After much success of MotoGP with the two Virtual Race, they returned with the third round at Jerez on the 2020 game by Milestone, with Moto2 and Moto3 joining the fray as well. The premier class had a mixed grid with few returning from Round 1.

Among the riders returning were Tech 3 KTM’s Miguel Oliveira & Iker Leucona as Suzuki’s Alex Rins joined in, while Aprilia’s Lorenzo Savadori made his debut. The five-minutes qualifying had Quartararo on pole from A Marquez and Bagnaia.

It wasn’t a good start for Quartararo as he pegged down again, allowing A Marquez to take the lead from Bagnaia but a crash from the Spaniard allowed the Italian to take the lead with Leucona doing well in the Top 3 upon his return to Virtual Race.

But not for long as Leucona had a crash as multiple riders had theirs as well. Despite the crash, A Marquez recovered to be running second from Vinales, who steadied on along with M Marquez just behind. Quartararo, meanwhile, continued to have crashes.

Vinales shot into lead when A Marquez and Bagnaia crashed as M Marquez slowed down to fight against Petrucci. At the front though, the Yamaha rider had it under control to win third Virtual Race at Jerez with A Marquez in second and Bagnaia third.

M Marquez was fourth with Rins fifth after he cleared Petrucci towards the end. Oliveira was seventh from Quartararo with Leucona ninth as Savadori and Rabat rounded the Top 11 riders. Over in Moto2, Lorenzo Baldassarri had the win with Gabriel Rodrigo won Moto3.

Here’s where you can watch the races:

Here’s how Round 2 of Virtual Race panned out