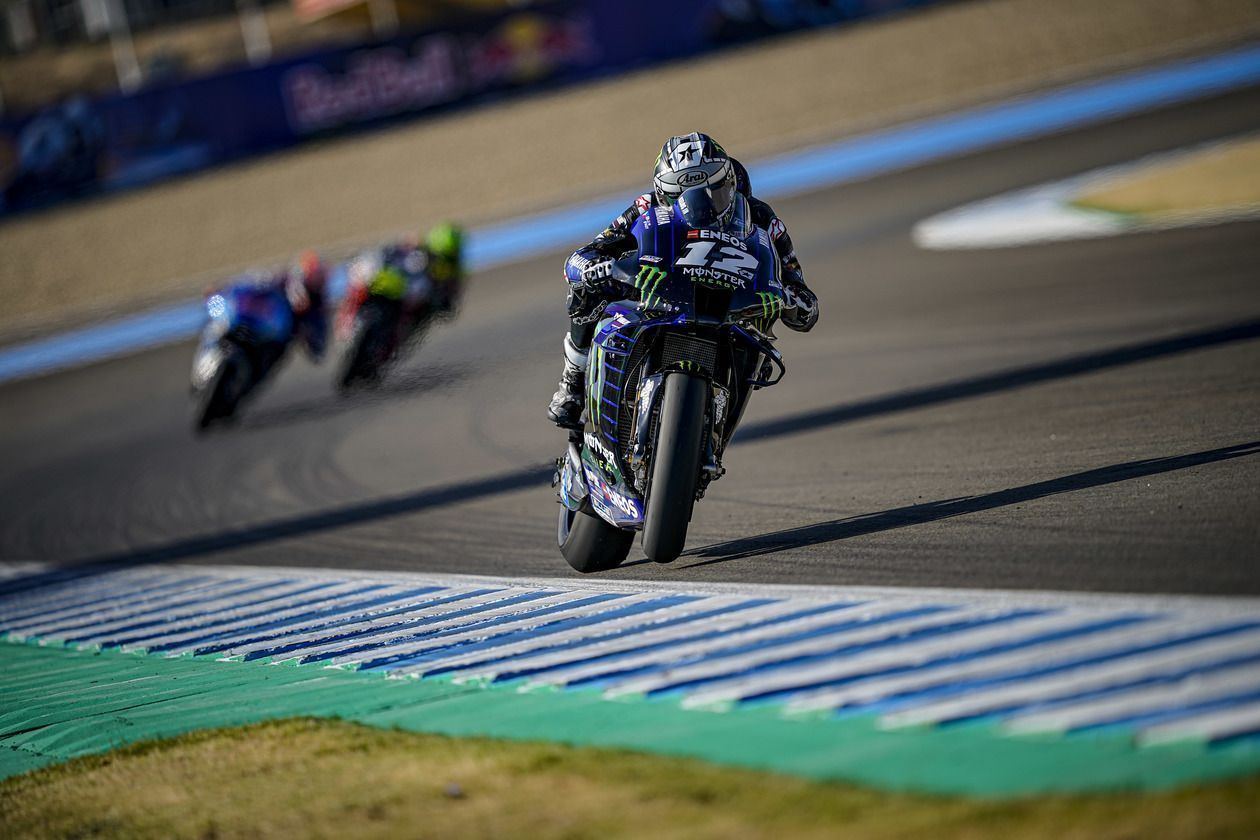 Yamaha’s Maverick Vinales topped the MotoGP test session at Jerez ahead of the 2020 start as Fabio Quartararo has been penalised for rules breach.

MotoGP held two test sessions of one and a half hour each at Jerez ahead of the official start on Friday. Honda’s Marc Marquez topped the morning session but Yamaha’s Vinales improved on that time to lead the way with a 1m37.793s.

Behind him was Petronas SRT’s Quartararo with a 1m37.911s lap as Honda’s Marquez morning time of 1m37.941s was enough to keep him third. Likewise Suzuki’s Alex Rins slotted in fourth ahead of Yamaha’s Valentino Rossi.

Aprilia’s Aleix Espargaro ended up sixth but he left oil on track due to mechanical issues in the afternoon session which had to be red-flagged after crashes for Honda’s Alex Marquez and Ducati’s Danilo Petrucci, with the latter sitting out of the session.

LCR Honda’s Cal Crutchlow lined up seventh ahead of Pramac Ducati’s Jack Miller, while the Top 10 was rounded out by Suzuki’s Joan Mir and Pramac’s Francesco Bagnaia. Everyone from third to eighth had their best time set in the morning session.

The leading Red Bull rider was Tech 3’s Miguel Oliveira in 11th with Avintia Ducati’s Johann Zarco doing well in 12th from factory KTM of Pol Espagraro and Petronas SRT’s Franco Morbidelli, where the Portuguese was the only one with his time set in the morning session.

Returning from an injury, Ducati’s Andrea Dovizioso could only manage 15th best time in the afternoon session as LCR Honda’s Takaaki Nakagami was 16th and Aprilia’s Bradley Smith 17th as per their best times set in the morning session.

KTM newcomer Brad Binder slotted in 18th ahead of Tech 3’s Iker Lecuona, with Petrucci in 20th, Marquez 21st and Avintia’s Tito Rabat 22nd – where the Ducati and Honda MotoGP rider set their best times in the morning session.

Aside this, Petronas SRT’s Quartararo was handed a time penalty after his testing rules breach during the COVID-19 break. The Frenchman rode a Yamaha R1 at Paul Ricard and it was found that he had some performance parts attached on his bike.

It was deemed as rule break in terms of a private testing as per the FIM regulations. While manufacturers do have concessions but Yamaha is not on that list and so the governing body has deducted 20 minutes of practice time from upcoming Spanish GP.

It means, Quartararo cannot start until after 20 minutes has passed in the session but interestingly the rider has appealed the decision, which the FIM notes was lenient one since the French MotoGP rider did not do it on purpose.