Home In the Spotlight Vinales opens up on struggles, lack of respect, Quartararo data & more 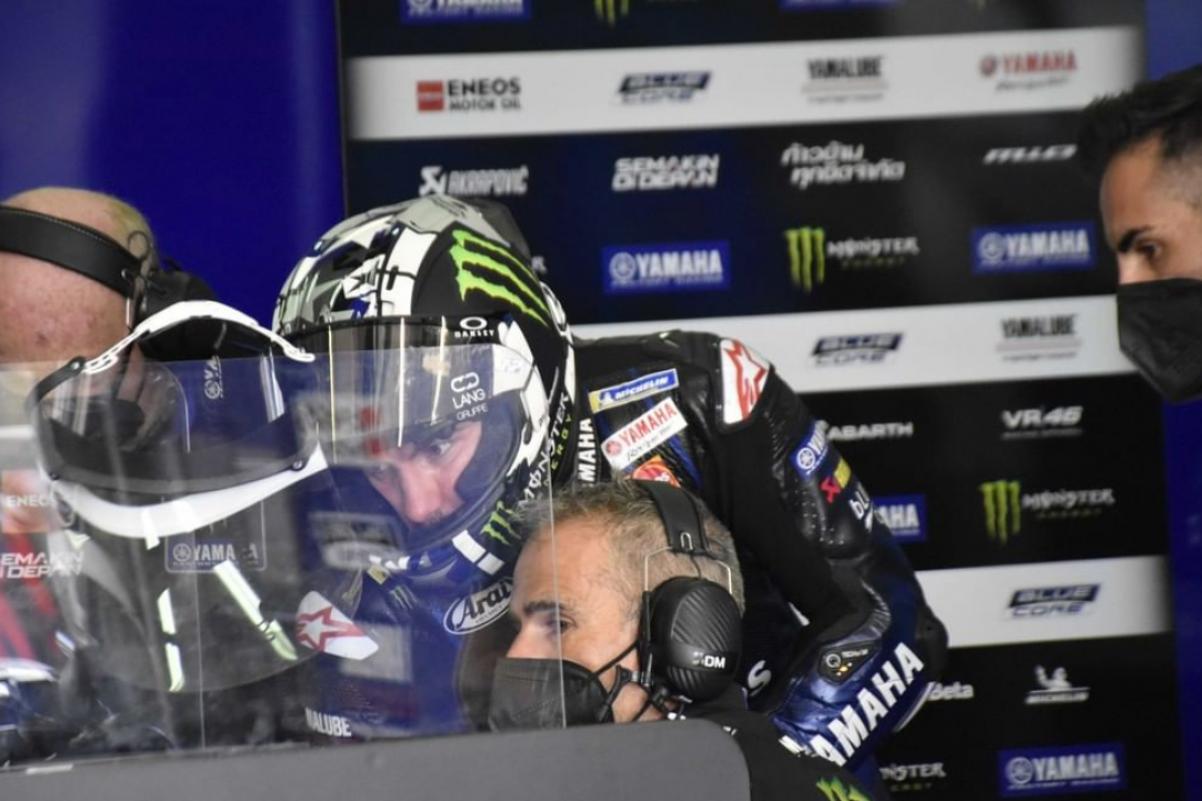 Maverick Vinales was seen as a dejected MotoGP rider after the German GP, where the Spaniard was unable to even to finish in the Top 15.

Already Saturday was a disaster for Yamaha’s Vinales in MotoGP German GP, but Sunday was even worse, when he finished last in the grand prix, when his teammate Fabio Quartararo ended up on the podium in third, showing some fight.

The downward spiral of Vinales has been on since his Qatar GP win, where everything looked solid for the Spaniard and also Yamaha, with Quartararo up there. But in the races then after, the Frenchman has been the lone hand at the front.

Even though Vinales finished in points all-through, but he was not there for the win, while Quartararo rallied on. The Frenchman sits on top of the riders’ standings with 131 points, while the Spaniard is sixth with 75 against his name.

Post the German GP, Vinales burst open his emotions, as he took Yamaha to a charge too. This is not the first time for a rider to talk about the Japanese manufacturer, as Petronas SRT’s Franco Morbidelli did so earlier in the season, as well.

On how German GP panned out  and issues –

Vinales: “I always have the same problem and that is that the rear wheel skids a lot. I have been saying it since Portimao and there is no solution. Yes it is true that we are working , but… six races have already passed to find a solution. I really try to be calm, I try to work, I try to do everything. But the result is the same. And then if you have a Ducati in front of you, the frustration is incredible.

“I don‘t really know what happened with the bike at the beginning. I had a highside going into the corner. I looked to see if the tyre was flat or not, because I didn‘t understand what happened. But then I did two or three good laps, 22-highs and 23-lows on my dashboard. After that I got stuck behind the Ducatis. I was behind Marini and Bastianini. I could not pass them. Impossible.

“I prepared what I could but they had more power, they braked later. I’m sorry but that’s how it was. When I arrived to Franco I could overtake quite good, just in the first try I overtake. But on another Yamaha it’s much easier, but with the Ducatis it’s so hard. So, basically when I spent 10 laps there I see maybe my position was 13th, I said ‘OK, I drop back, get fresh air and try to get some data and see how the bike is working alone’. I could make ’22 low by the end of the race, which is not bad, while behind them it was ’25: a big difference! But, overall, I don’t know. Nobody here has the answer.”

Vinales: “Let him go out to collect data and work. And what do I do? Do I finish 23rd? I’m not here to do 23rd, or to collect data or to be a test rider. In the end, there comes a time that as a rider you say that it seems like a lack of respect. The easy way is to take Fabio’s setting, try to adapt, give 100% and see how far I go, but this is not the solution. If I really want to win I have to do it with my own motorcycle. Someone else’s settings are not the solution. Yes, one day you can be inspired and it may work well, but it is not the solution. I have been doing I don’t know how many races, since Portimao, in this situation.”

On not wanting to emulate other, especially Fabio Quartararo:

“It is very difficult, as a pilot it is very complicated, because you have to have a lot of patience and I don’t want to use Fabio’s settings because I don’t ride like him. I’m not going to adapt to something that is going well for him, but it’s not going well for me. I have to build a motorcycle for myself. I don’t want to use another rider’s settings.”

There was some support for Vinales from his Yamaha teammates, with Quartararo and Valentino Rossi hoping that he can push through as he is fast. With Morbidelli, having, also just finished ahead of him in German GP, the Italian felt similar to the Spaniard.

“This morning we tried something to make the bike have a bit more performance in braking, but in the race I still couldn’t outbrake anybody because we reached the corners too far behind our opponents. So it’s impossible to overtake,” said Morbidelli. “I just had to watch and then finally finish the race.

“I know it sucks but it’s the situation right now and it is what it is. I also saw Maverick Vinales struggling quite a lot to overtake. He had some more speed than me in the straight so he had a little bit more chance to overtake, but it’s hard anyway. You need to make the braking and to outbrake the Ducatis is never easy.