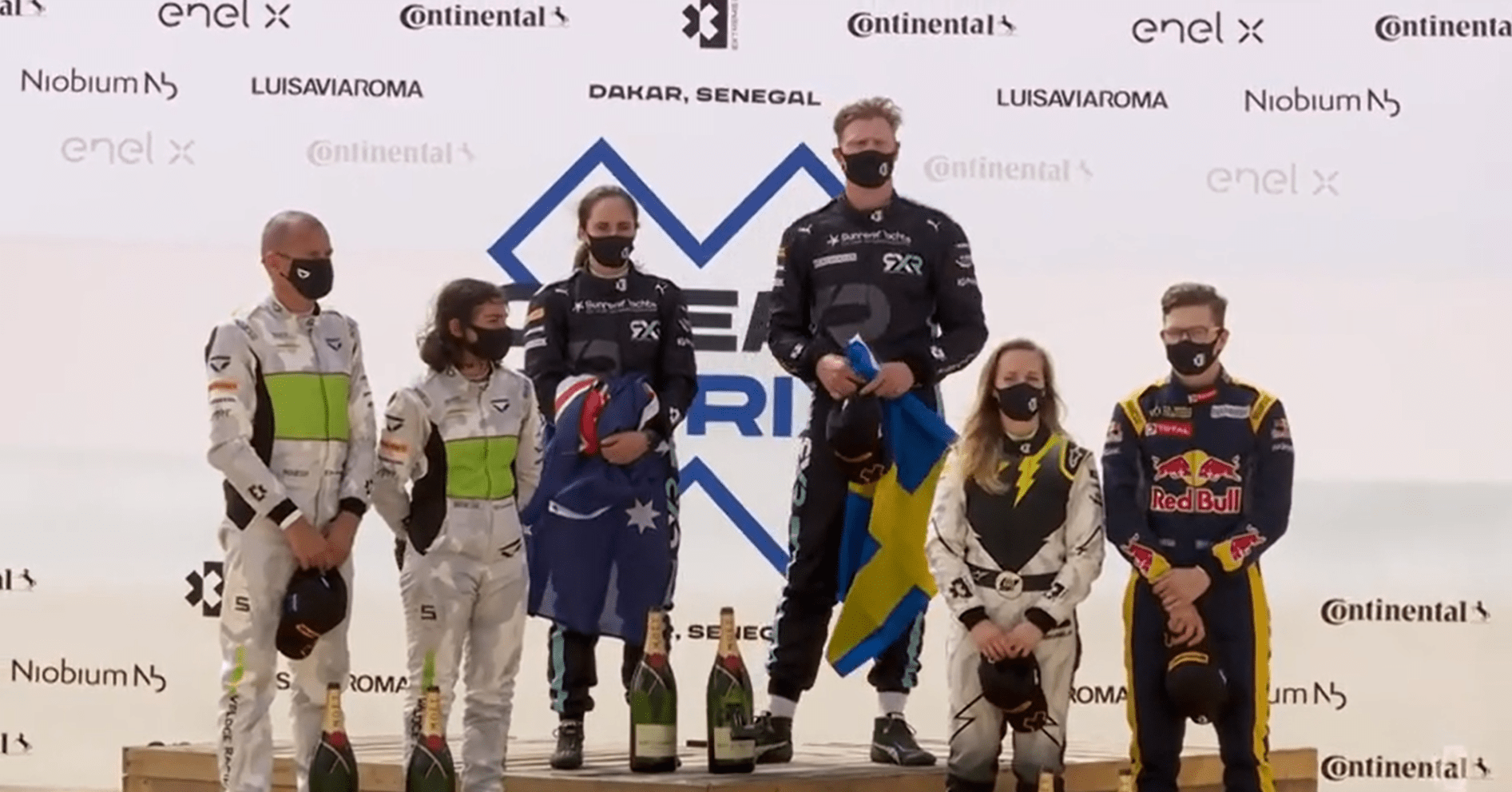 After the Desert X Prix in Saudi Arabia, Extreme E moved to Senegal for the Ocean X Prix, with an ocean front terrain, and racing on the beach sand rather than the desert one. After a practice run and shakedown, teams got into qualifying mode where X44 led the way.

The Lewis Hamilton-led team, having Sebastien Loeb and Cristina Gutierrez in the electric SUV machine on the 6.1km course, showed blistering pace all-through to top the timesheets, ahead of their rivals Rosberg X Racing in second.

Despite the lack of pace in the car, both Johan Krisotffersson and Molly Taylor, did enough to finish just behind the X44 pair. The latter had a scary moment when the car nosedived on the sandy terrain, but she escaped big damage and continued on.

A new pairing of Mattias Ekstrom and Jutta Kleinschmidt – the latter replacing the sick Claudia Hurtgen – at Abt Cupra didn’t deter their pace as much, as they ended up third in the order, despite a 15s time penalty and a crash for the latter.

In fourth was JBXE’s Kevin Hansen and Mikaela Ahlin-Kottulinsky, after a smooth run for the new pairing, where the former stepped in for Jenson Button, who did not travel to Senegal. Despite being a new pair, the two managed to eke out the maximum.

It was also a good run for Veloce Racing’s Jamie Chadwick and Stephane Sarrazin, as they managed to finish qualifying this time in fifth, ahead of XITE Racing Energy’s – re-branded in Round 2 after running as Hispano Suiza – Oliver Bennett and Cristina Giampaoli Zonca.

Chip Ganassi Racing’s Extreme E torrid run continued from Saudi Arabia to Senegal. Despite showing good pace, the pair of Kyle LeDuc and Sara Price, had to be content with seventh after the former faced a car shutdown in the middle of his run.

He managed to re-start, but by the time and Price completed their run, they were already out of Semi Final contention. Behind CGR, the Andretti United and ACCIONA | Sainz EX Team suffered mechanical troubles to be seventh and eighth, respectively.

The Andretti United pair of Timmy Hansen and Catie Munnings managed to finish their run, despite the former stopping, but the Sainz XE pair of Carlos Sainz and Laia Sanz, couldn’t finish their qualifying run after being unable to fix the issue.

Moving onto the Sunday Shoot Out, Semi Final 1 & 2 and Final, the former saw CGR, Andretti United and Acciona Sainz outfit starting the proceedings. Sainz Sr took early lead in the Shoot Out, leaving Hansen and Price in a fight for second.

The Spaniard had a solid gap, while Price hustled Hansen, who seemed struggling in the car. He held on, though, until the Switch. Post the driver change, Sanz couldn’t manage to eke out a big gap, as LeDuc started to pressure Munnings from the start itself.

Within no time, LeDuc had both Munnings and Sanz in his sights. He not just cleared the Andretti driver, but got the Acciona Sainz too, within few meters, to not only lead but also win the Shoot Out ahead of Sanz and Munnings, in a feisty drive.

The Semi Final 1 had X44, RXR and Abt Cupra take the field, with Ekstrom taking early lead from Kristoffersson and Loeb. After showing good pace on Saturday, the X44 car didn’t look the same on Sunday, but they weren’t helped by RXR’s smart Turn 1 move.

The lead of Ekstrom was undone in the Switch, when Kleinschmidt couldn’t start the car on time and fell behind. Taylor, meanwhile, took the lead to win SF 1 over Gutierrez, as both made it in the Final, knocking out Abt Cupra.

In Semi Final 2, it was mostly the fight for second after JBXE’s Hansen and Ahlin-Kottulinsky eased in to win their respective legs. Veloce’s Chadwick, meanwhile, had XITE’s Bennett hustling her all-through her lap, where he managed to clear her until Switch.

The roles reversed as Sarrazin started to push Giampaoli Zonca all-through the lap. The Frenchman managed to clear her in the final part of the circuit to make it into the four-car Final – with Veloce making their first final run after not even starting in Qualifying.

The Final had major dramas, though, with a touch from Sarrazin on Ahlin-Kottulinsky, damaged her right-rear suspension/driveshaft. She scrapped through and stopped just after crossing Turn 1, but she played a smart game to push ahead of Gutierrez.

The X44 racer also stopped at Turn 1 after her tussle with Taylor. The race was red-flagged with two cars remaining as Taylor led Sarrazin until the Switch. It was a standing re-start after the cars of X44 and JBXE were cleared from the racing line.

It was a comfortable run for Kristoffersson to win the second Extreme E race in Ocean X Prix alongside Taylor, while Chadwick brought the car home safely for her and Sarrazin’s first podium, while a smart work from Ahlin-Kottulinsky handed them a third place.

This is it, the Final of the #OceanXPrix.

Join us for a recap of the weekend, leading up to the race they all want to win. Who will be our winners in Senegal?https://t.co/Zl02QdgvlM

Here’s how Extreme E first round in Saudi Arabia went