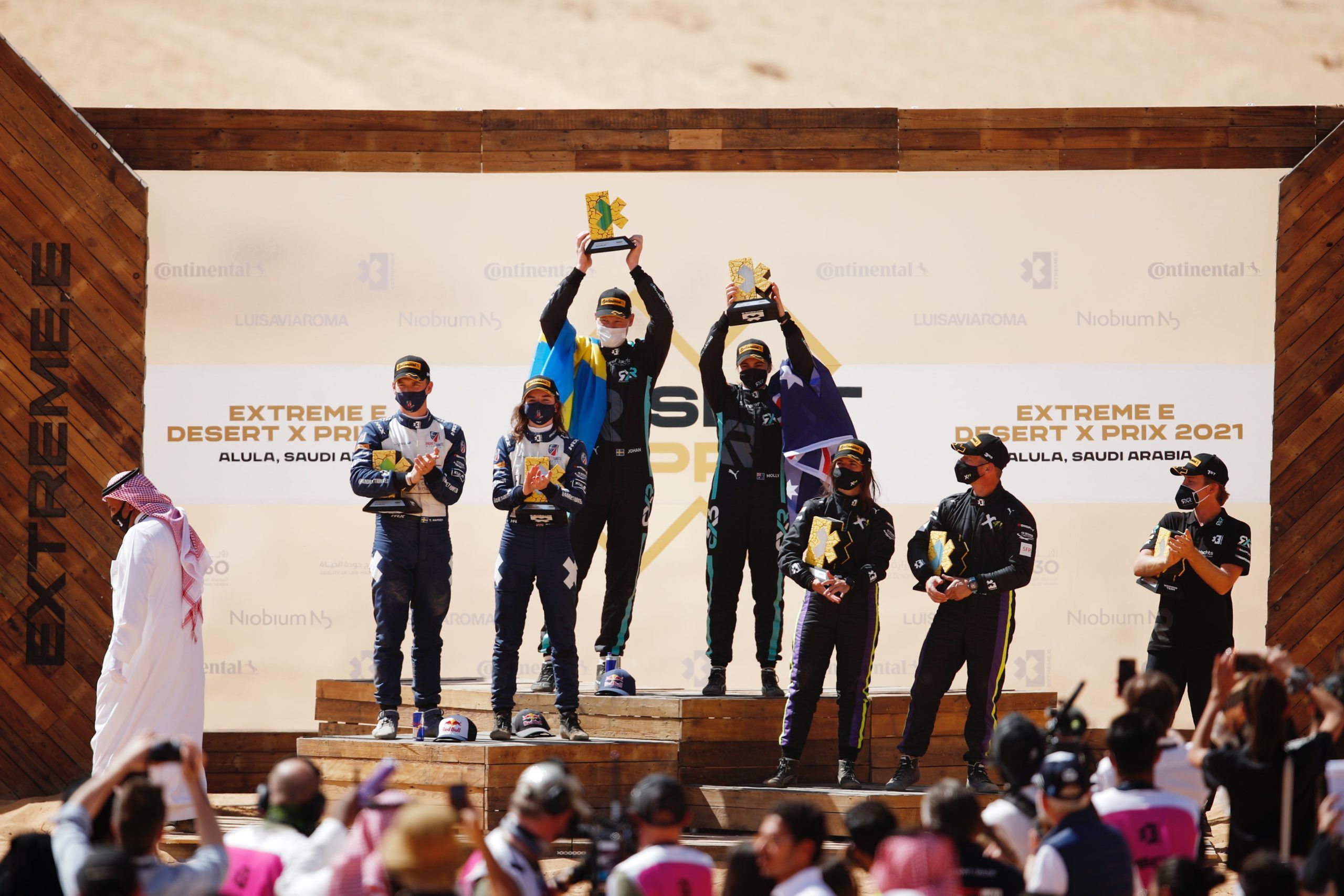 The opening weekend of Extreme E series started in Al Ula with some practice runs for the team in the desert before they got down with the Qualifying business. There was already an incident involving Chip Ganassi Racing’s Kyle DeLuc, which required extensive work.

The qualifying then had its own share of dramas with incidents for ABT Cupra’s Claudia Hurtgen and Veloce’s Stephane Sarrazin – both requiring repair job. While the former managed to stay on, the latter had to retire from the event eventually.

The combined qualifying – Q1 & Q2 – saw Rosberg X Racing’s Johan Kristofferson and Molly Taylor took charge but a 60s penalty for exceeding speed limit by 30 km/hr in driver change zone, dropped them first to third in the order for the semi-final.

This allowed Hamilton’s XE44 to take the top spot with its duo of Sebastien Loeb and Cristina Gutierrez ahead of ACCONIA | Sainz XE Team’s Carlos Sainz Sr and Laia Sanz, who showed consistent performance all-through as well.

With Rosberg’s team in third, Andretti United’s Timmy Hansen and Catie Munnings ended up fourth and had to go through ‘Crazy Race’ to make it to the Final. They were hampered due to puncture as the latter then fought through it to make it on the finish line.

Behind them were Hispano Suiza XITE Energy Team’s Oliver Bennett and Christine Giampaoli Zonca and JBXE’s Jenson Button and Mikaela Ahlin-Kottulinsky – where the former had 75s penalty for speeding in driver switch zone, while the latter stopped on track briefly after hitting a bump in Q1.

There were further dramas for Chip Ganassi Racing after Friday troubles as they failed to make to start line in Q2 and couldn’t complete their run, while ABT Cupra’s Hurtgen’s crash ended their qualifying as mentioned above.

Moving on to the Semi-Finals, Rosberg’s Kristoffersson had a supreme start to lead the pack after using a power boost in the perfect manner. Sainz and Loeb made slight contact, which left the former with a damage on the left-rear of his Extreme E ODESSEY-21.

Kristoffersson, meanwhile, handed the car to Taylor then, who saw through the line calmly ahead of Gutierrez and Sanz, where the former two made it into the Finals. The Crazy Race then had Andretti United’s Hansen starting from pole after ‘fan vote’.

He quickly took advantage at the start, while Hispano’s Bennett and JBXE’s Button fought it out, where the latter had a slight off, from which he couldn’t recover. Hansen and Munnings took the win to make it into the Finals, with Giampaoli in P2 and Ahlin-Kottulinsky P3.

Before the Extreme E Finals, there was a Shoot-Out to decide the seventh and eighth position, where ninth was out of equation due to Veloce’s withdrawal. It didn’t end nicely where ABT Cupra’s Hurtgen and CGR’s LeDuc collided in the dust.

The two fought well but having hit ridges, LeDuc fell behind Hurtgen, in her dusty trail. He was unsighted by it as he clouted the back of the ODESSEY-21, resulting in a red flag. The dusty trail made it difficult for teams, which is why organisers resorted to time trial format with qualifying rather than four to five cars together.

The Finals saw Andretti United’s Hansen start on pole after the six teams who did not make it to the final race, voted for them under ‘Grid Play’ system. But the preferred starting position didn’t help him as Rosberg’s Kristoffersson had a solid start once again.

He managed to the lead into Turn 1, which sealed his team’s win barring any incidents. The dust trail scenario made it impossible for the following car to challenge, as the pair of Kristoffersson and Taylor won the opening Extreme E round in Saudi Arabia.

AU’s Hansen and Munnings ended up second after managing to get ahead of XE44’s Loeb and Gutierrez – with the latter having power steering issues in the final race. As known, Sainz & Sanz were fourth, Bennett & Giampaoli fifth, Button and Ahlin-Kottulinsky sixth.

Incidents during the Extreme E Round 1:

Kyle LeDuc had a big off during Shakedown 2 this afternoon! Luckily he's ok!

Don't miss the action from Shakedown! Watch across our socials in around one hour's time! #ExtremeE #DesertXPrix pic.twitter.com/m7PVX1dZun