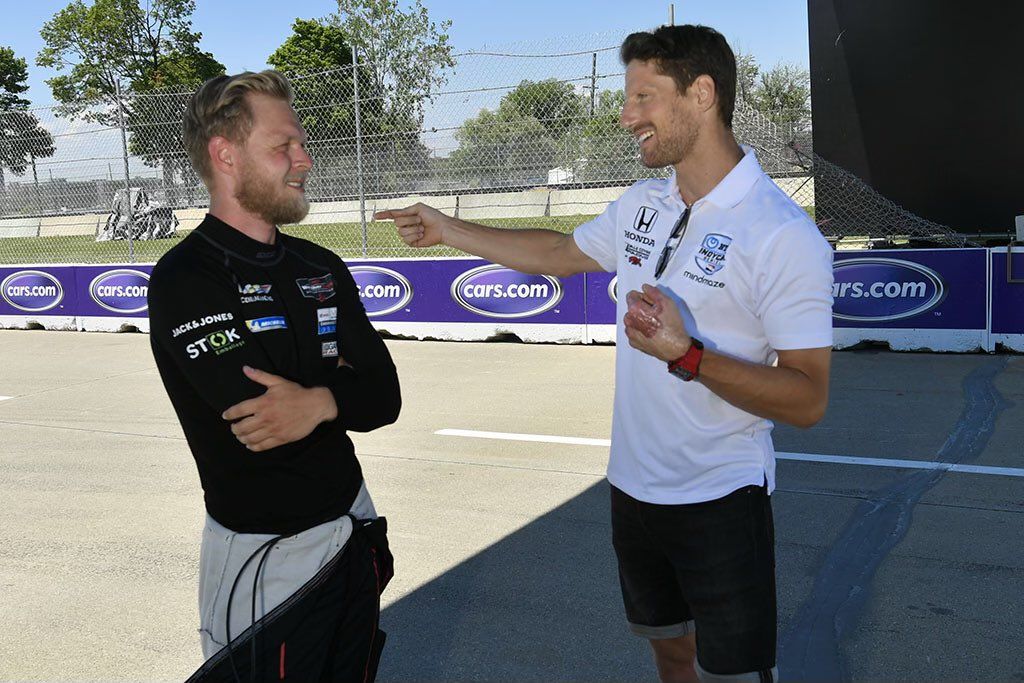 Romain Grosjean and Kevin Magnussen re-united at Detroit for the first time since F1 Bahrian GP, while there for IndyCar and IMSA races, respectively.

The Detroit circuit is hosting IndyCar and IMSA’s WeatherTech Sportscar Championship this weekend, where Grosjean is racing for Dale Coyne Racing in the former, and Magnussen for Cadillac Chip Ganassi Racing in the latter, in the DPi category.

It is the first time that IndyCar and IMSA is racing on the same weekend in 2021, which gave a chance for the two former F1 drivers of Haas, Grosjean and Magnussen, to catch up. It was their first meeting since the 2020 Bahrain GP, as well.

Post his incident, Grosjean flew home from Bahrain, after it was confirmed that he cannot race in Abu Dhabi. He moved to IndyCar, while Magnussen chose the sportscar route. The two never crossed their paths, despite racing in the United States of America.

They caught up on Friday, where Grosjean and Magnussen discussed about the different cars they are driving, and the shock they had switching from F1. They also discussed about the Dane racing with his father Jan in Le Mans this year – a lifelong dream.

They ended their brief chat while talking about the burnt palm of Grosjean, which needs further grafting. The Frenchman talked about some of the difficulties he has with hand movements, but largely, it is fine for him to drive in IndyCar.

Here’s the video from Michelin:

Back together again. Former @F1 @HaasF1Team teammates @KevinMagnussen and @RGrosjean reunite at @detroitgp for first time since Bahrain GP. Now in @IMSA and @IndyCar – we exclusively heard the two catch up.#IMSA/#IndyCar/#F1/#DetroitGP/@CGRsportscar/@DaleCoyneRacing pic.twitter.com/N3QVjGXXq0