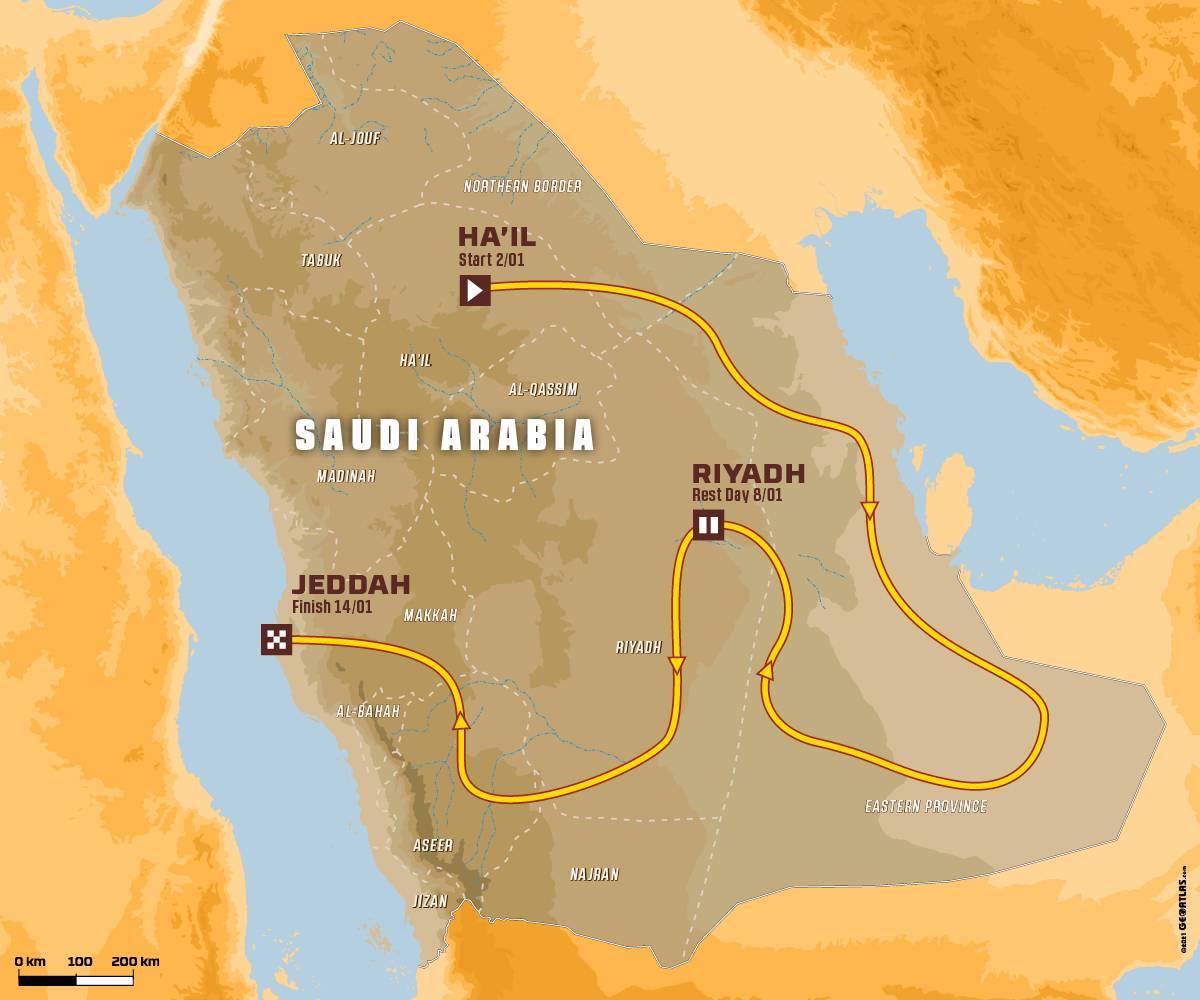 The initial route and dates for 2022 Dakar Rally has been revealed, with the action to take place in ‘Empty Quarters’ in a new South loop.

For its third edition in Saudi Arabia, the 2022 Dakar Rally, will kick-off on January 1 with the Prologue and finish off on January 14 in Jeddah. The action will start in Ha’il, where the participants will go through the ‘Empty Quarters’, denoted as the South loop.

It is through that, they will travel to Riyadh, which will also host the rest day. From there on, they will move towards Jeddah, where the 2022 Dakar Rally will culminate. The broader categories remains the same, that of, Car, Bike, Quad and Truck.

However, there will be sub-categories, especially under Car, where various types of sustainably-run vehicles will run – mostly electric and hybrid. This is the first step towards full change in the years to come, across all categories of racing.

Here’s part of the release: “For its 44th edition, which will run from 2-14 January, the Dakar will pay its third visit to Saudi Arabia. The rally will start in Ha’il and finish in Jeddah, after a rest day in Riyadh. With the route heading in a south-easterly direction, the organisers propose a sandier tone to the challenge. In the Empty Quarter, it’s “dunes galore”!

“The desire to take the discipline towards a virtuous operation in terms of carbon emissions will take concrete form from 2022 with the launch of a T1-E category reserved for prototypes engaged in this research. The end of the combustion engine era is planned for 2030 for cars. The popularity of vintage vehicles in the “Dakar Classic” regularity race has encouraged many enthusiasts of 1980′ and 90’s 4x4s to have a go in the adventure. The field could double in size at the start in Ha’il.”

Here’s the three key areas in the route of Dakar 2022:

Ha’il: “You could say it is the capital of the nomads in Saudi Arabia. Ha’il was for many years a stopover on the trade route linking the Red Sea and Mesopotamia. A place of exchange, rest or transit, the city has developed a welcoming feel, which is rooted in the way of life there. It is here that the core of Saudi drivers was formed, where the annual rally became the meeting place for the whole rally-raid community. After having already hosted one stage of the Dakar in 2020, and then the rest day in 2021, Ha’il is getting ready to organise the scrutineering and the rally start in 2022. A bivouac will be set up there at the start so that the drivers can truly immerse themselves in the atmosphere.”

Riyadh: “The large groves that gave the city its name in the 18th century (gardens in Arabic) have for the most part given way to a city which extends over more than 1,500 km2 (compared to 105 km2 for Paris or 203 km2 for Buenos Aires) and is home to more than six million inhabitants. The demographic growth in the capital since the 1970s has been accompanied by the construction of several grand skyscrapers with innovative architecture, such as the Al Faisaliah Tower (267 m), the Kindgom Centre (302 m) and the Burj Rafal (307 m). The capital of the Saudi kingdom saw the finish of Dakar 2020, and is once again going to provide an oasis for the crews and drivers of the 2022 edition… for a short rest day.”

Jeddah: “The Dakar landed in this economic centre of Saudi Arabia in 2020. Then in 2021, a loop was drawn up, starting and ending in Jeddah.  This time, the gateway to the holy places of Mecca and Medina will be the ultimate goal of the adventure. Driving along the Red Sea coastline will serve as a reward for all of the efforts made during the 8000 km rally.” 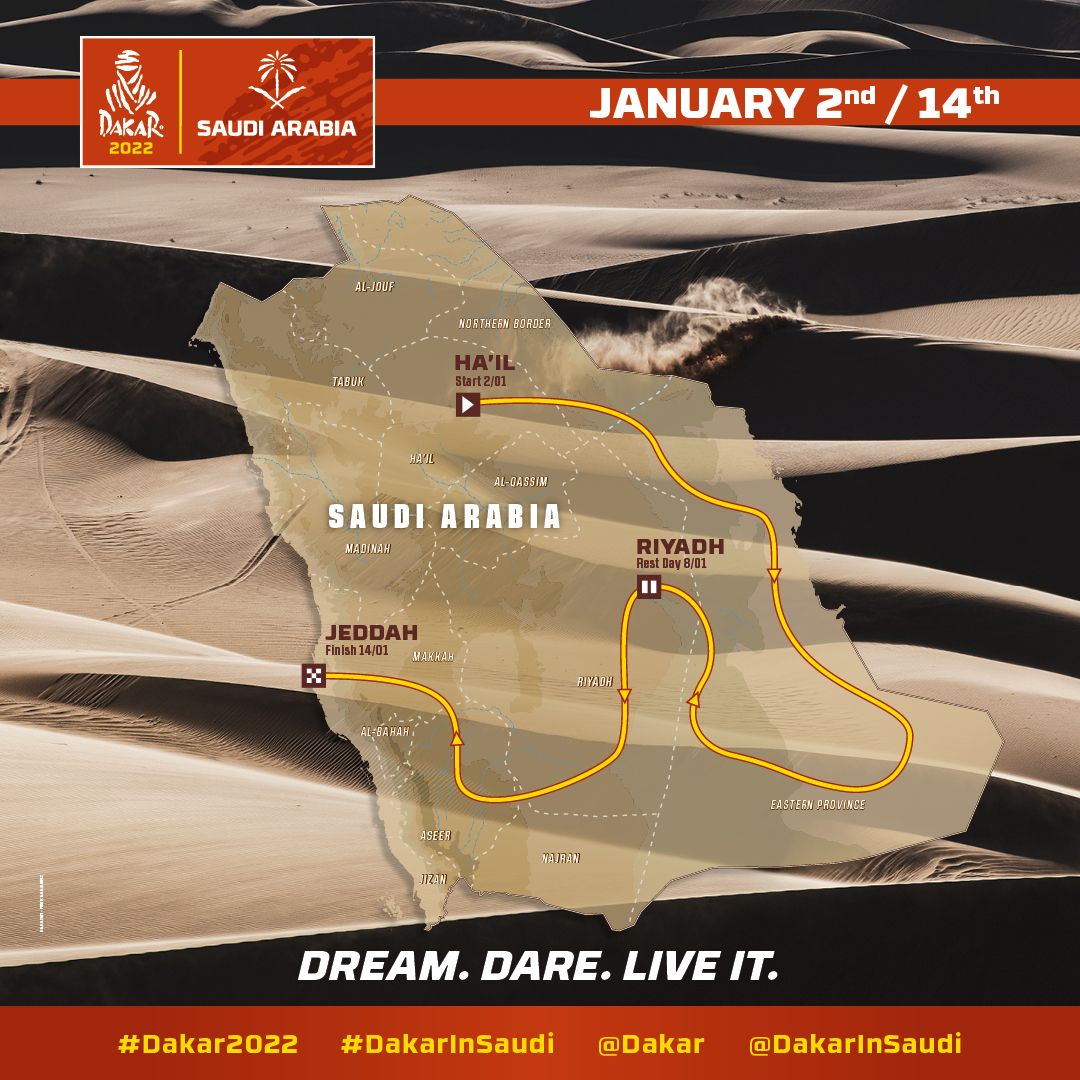