Home F1 Vettel says there was no intention from Raikkonen, just misunderstanding 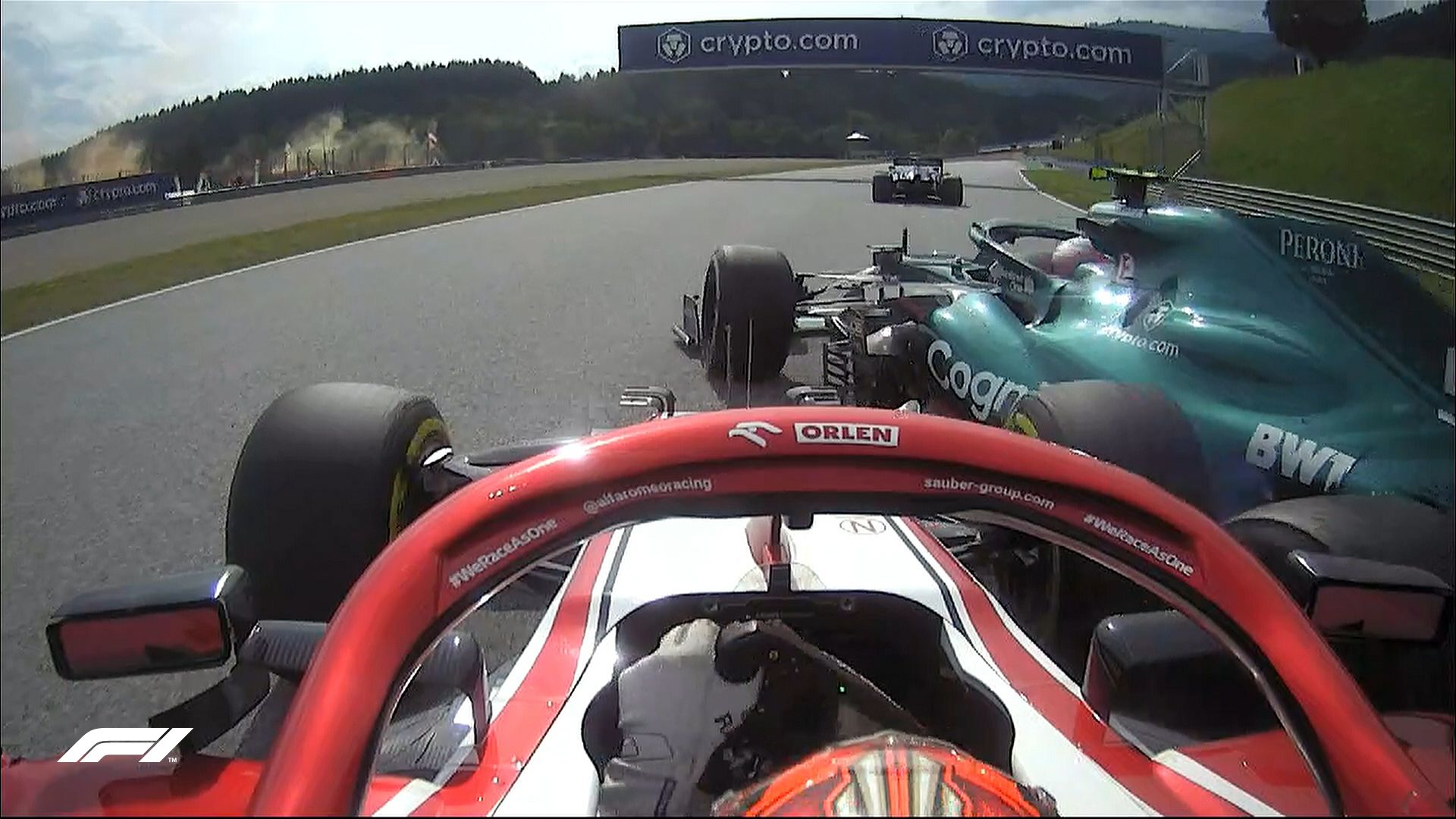 Sebastian Vettel put down F1 Austrian GP incident with Kimi Raikkonen as misunderstanding, as Antonio Giovinazzi and Esteban Ocon have another terrible run.

Aston Martin’s Vettel did not have an ideal end to a difficult F1 Austrian GP, as he ended up in a collision with Alfa Romeo’s Raikkonen, who was chasing Williams’ George Russell for 11th. The wheels of the German and the Finn touched, sending both into the gravel.

They were classified still, with Raikkonen in 15th and Vettel in 17th, despite the penalty for the former after the stewards adjudged the Finn as the guilty party for the clash. He was handed a drive-through penalty, which was converted into 20s.

Post-race, both were confused with the incident, as Vettel put it down to misunderstanding. The German, anyhow, did not have a good run with no points. He reckoned the balance was fine, but they simply lacked speed and pace to push on into the Top 10.

“It was not an easy race, which ended with a trip through the gravel because of the misunderstanding with Kimi,” said Vettel. “I guess he just did not see me in front of him. The first I knew about it was the contact I felt on the left rear. I had made a good exit out of Turn Four and was pulling ahead of Kimi on the right as we approached Turn Five.

“I do not think there was any intention from Kimi. Even before that, we did not have the speed to fight for points. The balance inside the car felt alright, but the cars on the Medium tyres had better performance in the opening stint when I was stuck in traffic without any clean air,” summed up Vettel, who added that he will certainly have a talk with Raikkonen and clear out the small hiccup.

For Raikkonen, he almost got Russell, who put up a good defence. In fact, he complained on radio of the Brit moving under braking, but the FIA stewards cleared the Brit of it. The Finn wasn’t happy with the incident, but he noted that it wouldn’t have changed the result.

“It was a race in which the car was pretty ok but we just lacked that little bit to be in the top ten,” said Raikkonen. “We had a first long stint on hards, then on mediums we were able to catch up to the guys in front fighting for tenth. Alonso went past Russell, I went close, then had the contact with Seb. We came together and that was it, in the end it didn’t change the end result as we would have both fallen a bit short of the points.”

It wasn’t the day for both the Alfa Romeo cars, in fact, as another Lap 1 incident caught out Antonio Giovinazzi after the Styrian GP. It was again at Turn 3, where this time, he was on the inside as opposed to outside the last time, as he collided with Alpine’s Esteban Ocon.

The Frenchman retired immediately in the sandwich of Giovinazzi and Haas’ Mick Schumacher. The Italian then had a pitlane speeding penalty, which further hampered his race, as he ended up 14th, just ahead of his teammate.

“A frustrating day: just as last week, our race was compromised on the first lap,” said Giovinazzi. “I had contact with Esteban and had to pit: we had good pace afterwards but everyone was pretty close and it was very difficult to recover much. I got stuck behind a Williams, then even got a penalty – a weekend to forget.”

For Ocon, it was another moment of ‘we cannot catch a break’. His season has spiraled downward, as the season of Fernando Alonso has gone upward. “It was unfortunate for our race to end early,” he said. “There wasn’t much I could have done as I was sandwiched between Mick and Antonio at Turn 3 in a racing incident.

“It’s one of those things and a consequence of starting the race at the back. There’s always a chance for fights and contact and it’s easier to be caught up in trouble there. The team and I can’t seem to catch a break at the moment. We’ll reset, restart from zero and prepare for Silverstone. The only way we can go is forwards,” summed up Ocon.

Here’s the clash between Kimi Raikkonen and Sebastian Vettel: https://www.formula1.com/en/latest/video.2021-austrian-grand-prix-raeikkoenen-and-vettel-collide-on-final-lap.1704368244427566656.html

Here’s what others thought of penalty saga