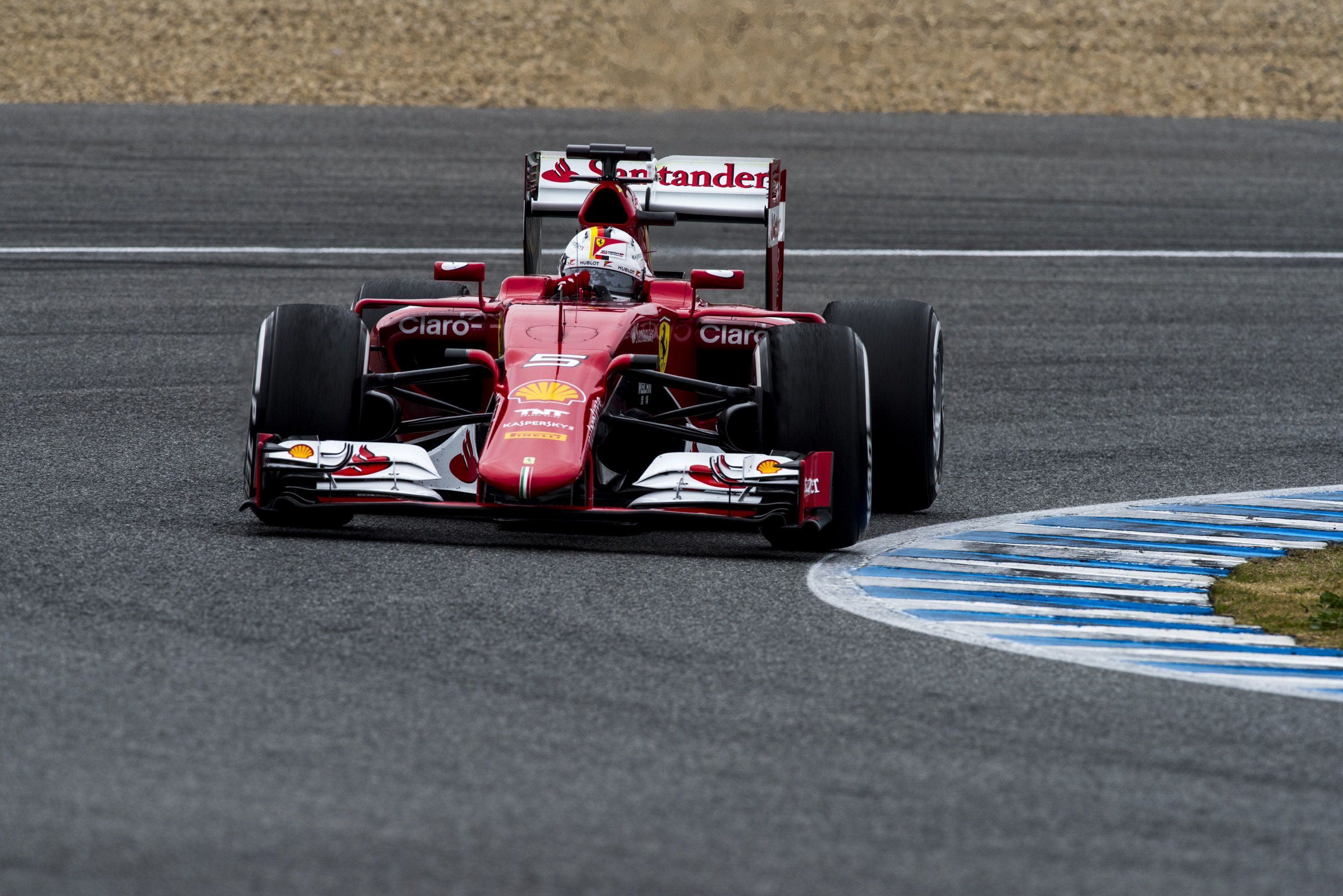 Ferrari and Vettel have returned to be in front of the classification of the second day of testing at the Jerez circuit. The German has been very fast in a single lap, and has been placed ahead of Brazilian Felipe Nasr and Valtteri Bottas. However, Mercedes has again become the team with most laps completed, but not as much difference as yesterday.

Sebastian Vettel again led the second day of testing at Jerez with his new Ferrari SF15-T. The day, cloudier than yesterday, finished with water on the track, for a wet afternoon crusader against the Jerez circuit and rain with great intensity. However, the hours before this mishap, teams have been able to work under optimal conditions, with a dry track.

Teams have used the weather to continue accumulating mileage on the new cars of 2015, which in the case of some teams, do not have long. This is the case of McLaren, who only has accumulated six laps, with Jenson Button today at the wheel. The British has run five laps in the morning and late in the afternoon he showed up for an installation lap with extreme water tyres, showing a remarkable improvement in the Honda engine sound. We will see what they are able to do tomorrow.

A situation completely backwards lives Mercedes, the defending champions, who after accumulating more than 150 laps yesterday, today Lewis Hamilton has also been the driver with most time to last on track, racking up 91 laps, including highlights of more than forty consecutive laps . However, the UK driver has just rolled in the morning; a problem with the water pump of the W06, caused by a defective part, has forced him to leave early.

Thus, the most consistent in the day today have been the top two, Sebastian Vettel’s Ferrari and the Sauber of Felipe Nasr. Both have made 88 laps, also risking in the afternoon when the track was still wet. The new Ferrari is shown quite quickl around, and it has lowered the best time from last year by more than two seconds. Furthermore, Nasr has focused on accumulating miles on his debut with Sauber.

Others who have been released today were Lotus, who arrived yesterday afternoon at Jerez. Today was Pastor Maldonado’s job, doing 41 laps despite being the first day of testing for them. The Venezuelan could drive enough and start testing the new E23, driving for the first time the Mercedes engine. However, at the end of the day the car stopped in the middle of the track, thereby causing the only red flag of the day.

Red Bull has also suffered many problems and setbacks today. Kvyat, new driver at Red Bull, has been able to do only 18 laps, each in the morning, and no one full. The cause has been the breaking of his front wing in a training lap, and due to material shortages, the Russian driver had to drive a good time in these conditions, rather unusual and a little dangerous. Red Bull is not having quite the desired conditions, but expect everything to go better tomorrow and Wednesday, while are happy to have rolled more than the previous year.

Finally, also note the presence of Valtteri Bottas with Williams and Max Verstappen with Toro Rosso, the latter also debuting on track with only 17 years. Both have conducted a quiet day with not so many incidents, accumulating 61 and 73 laps respectively. The Dutch also wanted to increase his mileage in the afternoon, making a handful of laps in the rain, and accumulating experience in this field of racing.

Tomorrow the tests are back with a new full of hopes and illusions for the teams, with the following drivers working in their cars: Rosberg (Mercedes), Ricciardo (Red Bull), Massa (Williams), Räikkönen (Ferrari), Alonso (McLaren), Sainz (Toro Rosso), Grosjean (Lotus) and Nasr (Sauber).

Final Results of the second day of testing at Jerez: