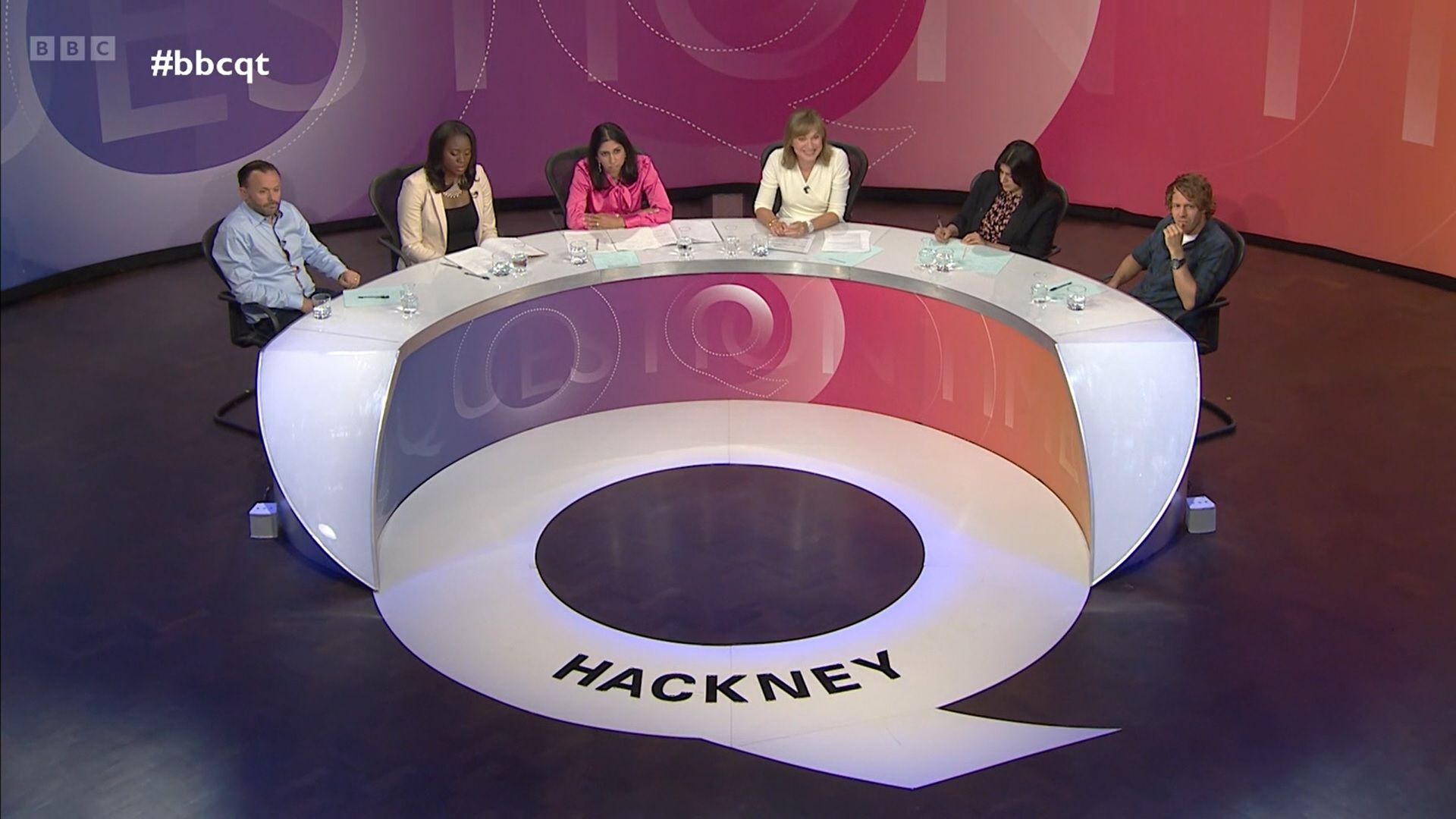 Sebastian Vettel had a busy Thursday as he visited multiple places including BBC’s HQ for Question Time where he answered some hard questions.

Aston Martin’s Vettel was part of the BBC Question Time with Fiona Bruce last evening where he was very vocal and articulate about several topics. Anyone who knows him, will remember him mucking in with the cleaning staff after the British GP in July last year and being very vocal about the environment.

Before the BBC show, Vettel visited the Carol City Middle School in Miami and here he was honoured with opening a new Therapy Room while learning about the challenges that disadvantaged youth are up against. He coupled it with a visit to London to meet young persons and inspire them to greatness and then on to Question Time itself.

On the panel with presenter Fiona Bruce were Suella Braverman,  Shabana Mahmood, Miatta Fahnbulleh, Geoff Norcott and Vettel himself. First question was put from the audience regarding the cost of living continuing to increase and reports that’s 1.5 million households will soon see food and energy bills exceed their disposable income. When is the right time for the Government to intervene?

Vettel: “Well I think there is the same debate and exactly the same questions being asked in Germany. They are very fair. Certainly the latest developments with the situation in the Ukraine has sparked a lot of talk because the energy prices have gone up and people have less money in their pockets which I think is very easy and clear to understand. Now the Question is what do you do with it and how do you fix it.

“I think it’s a bigger picture thing in truth it’s probably fair to say action should have been taken a long time ago already and we should not depend on prices that basically the UK or Germany or any country doesn’t dictate. It’s the prices that we and people and households all over the UK and Germany and other countries depend on so I think it is a really ongoing and interesting debate that certain terms have been mentioned like how do we source our energy? Where do we get our energy from? I think it is pretty similar in the UK where it is a mixture of Gas, Coal, and Oil.

“And it’s the same in Germany obviously Germany is very dependent on Russia and now potentially in trouble, what do we do with it? Is there going to be an embargo? How do we go forward? What do we do with Russia? Who turns the tap off? A lot of questions but the truth is we should have tackled these dangers and threats already a long time ago, we shouldn’t be as dependent and you know we have to shift into the next gear, get ready for the future, not only for becoming independent and protecting these households that we are speaking about but also to look after the bigger picture; you know making sure that we live on a planet that is as enjoyable as tomorrow as it is today.”

However, the interviewer Fiona Bruce did put him on the spot when she asked him did he feel Germany should cut off Russian Gas?

Vettel: “You know it is a tricky one, you don’t want to provoke Russia to act in a way that has consequences on all of us. Germany is so dependent, truth is…far too dependent and there’s exactly the debate, like how far do you go?  Is it actually possible to turn off the tap tomorrow?  Possibly yes for a while because Summer is coming but what do you do next winter? We don’t have Gas terminals to store gas for example.

“You know as I said in truth now I think it is a bit late to raise these concerns because a lot of people have raised these concerns a long time ago and the energy we use today, we are far too dependent and we should think of energy like peace energy or freedom energy which is renewable energy do I think that is the future not just for an independent way of protecting households and people who can’t afford to pay their bills but also to shift into the future.”

Following on from that came questions regarding Northern Ireland’s protocol?

Vettel: “Well, I am not familiar with all the details. Sometimes I am generally interested sitting listening to this and I thinking: You are missing sort of the bigger picture, you know we were speaking about the energy costs earlier and the bigger picture is clear that for the future it is not sustainable to pump oil, gas and coal out of the ground. My point there was that the solution is you have to do the shift moving forward, there was a push , three little words, get it done or get Brexit done and this is the consequences you deal with now.

“From a German viewpoint not good but I think the majority of German people don’t understand, some things better, some things worse. I’m not the best judge here but what I can see is that looking at the size of the problems that are ahead of us on so many levels; environment, social justice, looking after people, we need to do this together, we will not pull this off…just one of us and that’s where I don’t understand the push for Brexit and to say we will take care of ourselves and everything will be great. In the bigger picture, now you are in this mess, you got to deal with it, but I guess talking to each other and see.”

Vettel: “Well, I know a lot of Finnish people and Finland has a long border with Russia and was at war with Russia a long time ago so I can completely see the need for protection. Trouble is you don’t know who you are dealing with.  In a way you do and there were so many signs therefore you can question what brought us into this mess, whose fault it is and should we have seen the signs earlier.

“We mustn’t forget Ukrainian people are suffering today, tomorrow and for a long time and hearing first hand from families that have fled the Ukraine, I can’t imagine the suffering. I’ve grown up in a time when here was never a war so close. You travel the world and it’s a privilege to live the way we are in Europe. There was a long debate in Germany about supplying weapons and in the end we did but the threat is it might and that it might escalate.”

Energy support for Russia since 2012 and paying for Ukraine to be destroyed?

Vettel: “That is the debate in Germany, is that money financing the war, we must not forget that people are dying and suffering.  In the UK you are very dependent on Norway being an energy supplier. You don’t know what Norway will be like in 10 years time.”

Is he a hypocrite talking about environment while racing in F1?

Vettel: “It does, and you’re right when you laugh, because there are questions that I ask myself every day. I’m not a saint. I’m very concerned when it comes to the future, so these topics when it comes to energy, energy dependence and where we’re going in the future. There are certain things that are in my control, and certain things are not. It’s my passion to drive a car, and I love it. And every time I step in the car, I love it.

“When I get out of the car, of course I’m thinking as well, is this something we should do? Travel the world, wasting resources? There’s a lot of questions that I ask myself. There’s a lot of things that I do because I feel I can do them better. Do I need to take a plane every time? No, not when I can take the car. There’s certain things in my control and certain things outside my control.”

Every adventure is an opportunity to make a mark.

Today, we're in London with Sebastian Vettel to meet and inspire young people.

Stay tuned to see what he gets up to. pic.twitter.com/PNeRbV2P5R

As we travel the world, we aim to make a mark wherever we go. 💚

Fresh from visiting Carol City Middle School in Miami, today we had the privilege of opening a new therapy room at @OasisJohanna, while learning about the challenges facing disadvantaged young people. pic.twitter.com/13kpPynTIE