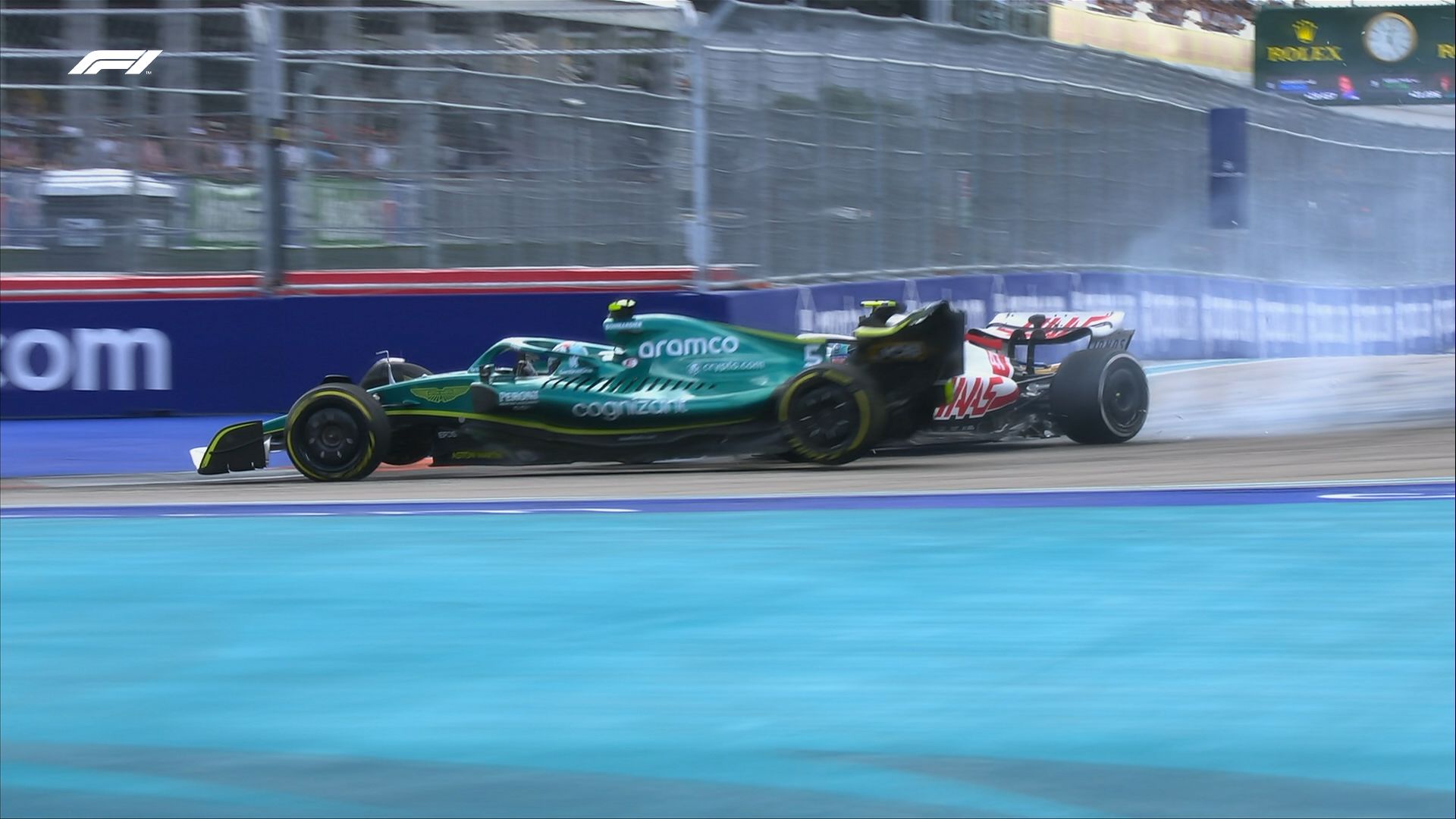 Sebastian Vettel talks about his incident with Mick Schumacher in F1 Miami GP where both were quite diplomatic in their answers.

Even before the start of F1 Miami GP, the Aston Martin pair had to face the wrong song. Both Vettel and Lance Stroll faced fuel temperature issue which is why they were forced to start from the pitlane. They chose the alternate strategy of starting on the hard tyres.

Both made inroads in the grand prix and became a thorn for some who were on a different strategy of using the medium tyres. After the safety car re-start, Vettel found himself behind Haas’ Mick Schumacher and Alpine’s Esteban Ocon.

The Frenchman tried a move on Schumacher in the final sector but it allowed Vettel to sneak past both. On the main straight, the Haas driver came back on the Aston Martin driver and tried a move at Turn 1 when the two made contact.

Vettel turned in on Schumacher but the FIA stewards adjudged it as no party wholly to be blamed. Since they share a good bond with each other, post-race they did not blame each other while were eager to speak to each other and understand their point of view.

“I didn’t expect it, let’s put it that way,” said Vettel to TV media. “Obviously a shame that we made contact and both of us out of the race, out of the points. That’s a shame. I’m disappointed for Mick and myself obviously that the two of us lost a good opportunity to score points today.

“I don’t know, I did not expect him, I need to have a look again. When I saw him, it was obviously too late, so we made contact,” summed up Vettel. On the other hand, Schumacher had a solid outing for the first time in 2022.

After being a shadow to his teammate in the opening few rounds, Schumacher went toe-to-toe with him and even passed him couple of times in the race. He ran in points briefly before the incident with Vettel which ended his chance of any points.

“Obviously, it’s hard to say and hard to judge from inside the car,” said Schumacher. “So, I have to wait and see how it looks from the outside. I don’t really know. It’s obviously super-difficult to see things in the rear-view mirrors of these cars.

“I tried not to go super-deep, tried to leave a bit of room, but clearly it was a bit too tight. It was a very unfortunate way to end the race today. But I’m sure it will also be good for me to see what Seb thinks about it. We’ll just have to move on from here. It’s nice that I can learn from him, he’s so valuable to me as a friend, so yeah, we’ll see.

“Obviously we’re all racers. I think that the pace was there. Even keeping Esteban in the Alpine behind on C4s definitely showed that we had great pace and also on that C2 we were able to stay with the guys ahead, and especially with Fernando. It all was looking good but unfortunately the last few laps where a bit chaotic,” summed up Schumacher.

Here’s the incident between Sebastian Vettel and Mick Schumacher: https://www.formula1.com/en/latest/video.2022-miami-grand-prix-big-shunt-with-vettel-costs-schumacher-first-f1-points.1732294227142898291.html