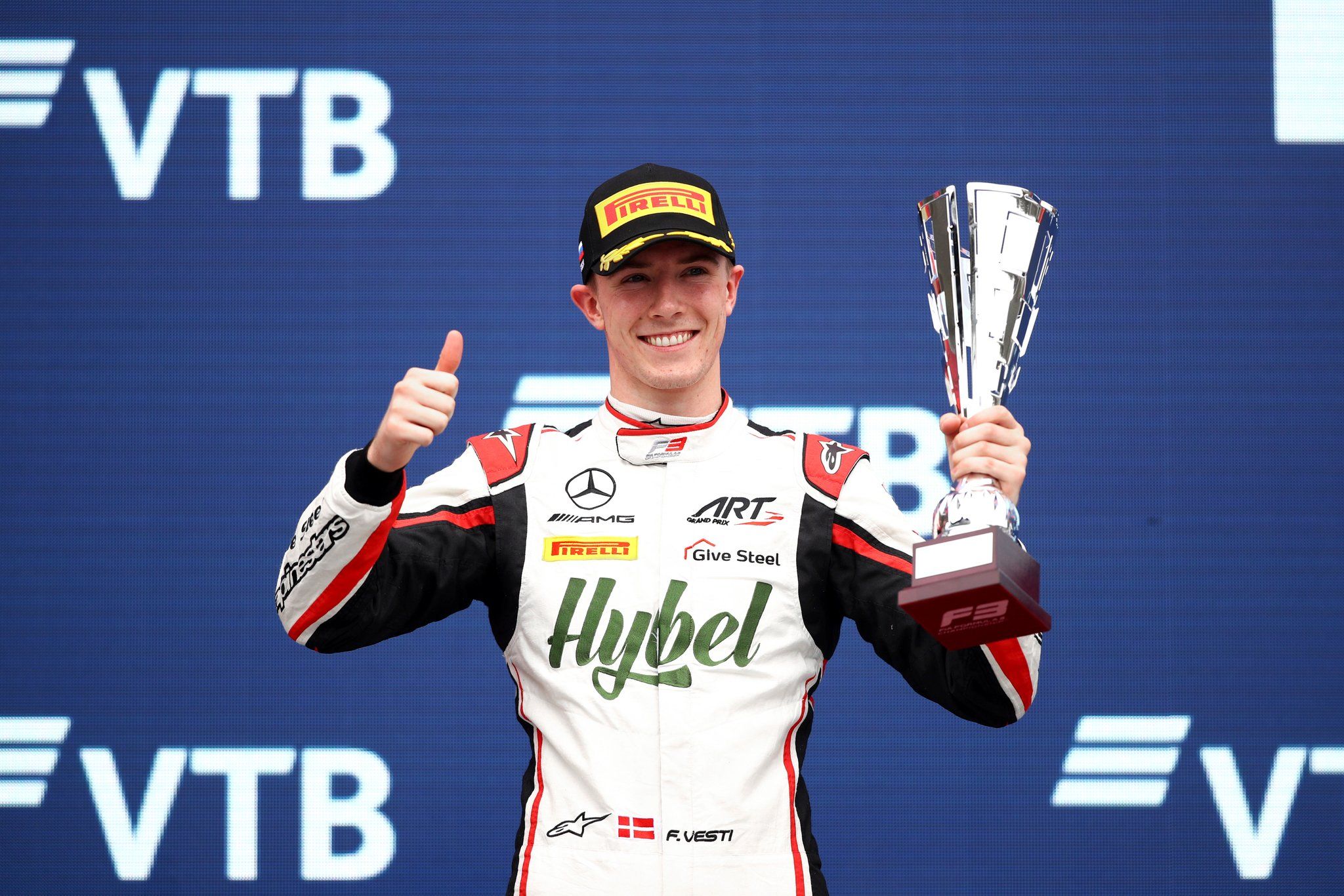 Frederick Vesti opens up about his second FIA F3 season, switching to ART from Prema, being a Mercedes junior, Twitch, his father and more.

Vesti has also competed in the F4 United States Championship, Italian Formula 4, Macau Grand Prix, and recently finished his second FIA F3 season. It was quite the 2021 season for him where he finished fourth – a bit lower than what he expected.

But it was a big year when he signed on as a Mercedes junior driver and switched from PREMA Racing to ART Grand Prix. FormulaRapida.net had the chance to catch up with the Dane and talk about they year, future, Twitch and his father’s contribution:

Q) You’ve had five podiums this season, very consistent and ended up P4, no P3 unfortunately. Was everything somewhat how you expected it to go?

Frederik Vesti: “Well, it was certainly not how I expected it to go. I’ve had really highs this year, taking pole position and winning races, but at the same time I’ve also had a lot of lows, making mistakes in qualifying costing me a lot of points in Zandvoort, for example.  I had car failures while being in a very good position for points. In fact, I’ve had five car failures this year which is just not good when you’re fighting for a championship, so that has probably been the most difficult part. Very frustrating.

Q) You moved from Prema to ART GP this year, so how did that go this year at the beginning and now looking back?

Vesti: “Yeah, I must say, it’s been a very interesting year for me and I’ve developed a lot personally. Of course, I’ve developed as I should as a driver, but especially as a person you know the mental part has been really challenging and sometimes changing team when you come from a team where everything is family. Everything in Prema, I’ve been there for two years and then suddenly in a new French team, new language, new people, new team chiefs, new car, new engineer, there’s lots of things to learn there and for sure that took a bit of time to get used to, but as soon as I got used to it, there was a lot of work to be done and I’ve really learned a lot. Also, it is good to change team already in Formula 3 because some people go in the same team from F4 to F3 to F2 and then eventually makes it into F1 and then in F1 you have to change team and new people and then that’s the first time you try it, but with this experience I definitely have learned many new things that I’ll bring with me in the future so that’s a really helpful thing.

Q) Talking about your future. What do you have in store for next year because obviously nothing is announced yet, so another F3 season, maybe possible a new F2 season?

Vesti: “We currently haven’t got anything to say really, it’s difficult to comment on anything. We’re working every single day, talking to potential partners. So we are pushing extremely hard to make this happen, if it’s in F2 which is what I’m pushing foror other categories, I don’t know yet, but I definitely want the best for my career and that’s what I’m working for together with my manager Dorte and Mercedes of course.”

Q) About Mercedes, tell us bit about that, you said that talks started in 2018. What have you learnt so far with Mercedes?

Vesti: “Yeah, well, it’s been the first year as a Mercedes junior driver and it’s true I’ve been talking to them for three years before I finally got the contract with them. Of course it hasn’t been the year I expected in F3, but they’ve still been there for me, helping me out in the difficult moments which has been important, you know, to have such a good team and engineers and people around it’s just another boost to my career. It’s a help, it’s an extra help to what I already have from my own team, so that’s very good. And of course I’ve been learning a lot from the people at Mercedes.”

Q) Continuing on with the Mercedes conversation, considering it was your first year with them, what was the programme like for you and how was it with the simulator. how was it with representing them is there any pressure, what comes with it?

Vesti: “This year we decided to focus 100% on F3 because I was on a new team and also because of COVID travel restrictions and so on, it was quite difficult. So purely for all those reasons, we decided to really focus on F3. Of course being in contact with Mercedes, talking to them on development and all these kinds of things, but going to the factory hasn’t happened this year simply due to COVID, but I’m definitely pushing to be able to go in the near future and definitely throughout next year.”

Q) George Russell had kind of a very similar path to you being a Mercedes junior driver then going to ART GP, so do you think you can look up to someone in that whose been in positions you’ve been in and you see them doing really well, successfully considering he’s moving next year. You feel like you’re gonna follow into that. Does that give you something to look up to, to look forward to maybe?

Vesti: “Well I think it’s really motivating that Mercedes are finally giving George the chance in F1, I really believe he deserves that. I believe. he’s good enough for that, so that’s really cool as a young driver. It’s really good to see that if you’re good enough you’re actually going to get the opportunity so it’s a big motivation for me to keep sending it.

Q) Moving on to Twitch now, diverging a bit, you had the Le Petit Le Mans so tell us about that, how was that?

Vesti: “It was actually quite funny because after I think, it was Tuesday morning after Sochi, I arrived home late on Monday and I went on my computer and I just saw that Felipe Drugovich was online. I called him up just to ask him about the weekend in Sochi and talk about my weekend talk about his, you know we’re good friends. We were driving a bit in our simulators together and then I realised that the last weekend now, was the 10 hour race in iRacing, so I asked him if we should just do it and we started practising, so we drove races all week to practise and then we did the race and won it. So you know it was just a fun thing but it turned out really well so that was really good.

Q) And finally, your father is heavily involved in motorsport, how did that affect you as a person, did it help you become who you are today in a way?

Vesti: “Yeah my dad is the reason why I’m here today, why I’m in F3 this year, he’s been working so hard and sometimes he had three jobs to make me race, both running his car company, running the team I was driving and you know flying around to find potential partners for me as well. He’s definitely the reason why I’m here and he’s improved me a lot throughout the years, since I was born, was first time on a motorbike with support wheels. From a bike when I was two and a half years old, so yeah, I started early with engines and fuel and everything around that. So it came natural to me to start racing and I’ve never ever thought about why I started just when I started I got the opportunity and since that first day I just loved it.”