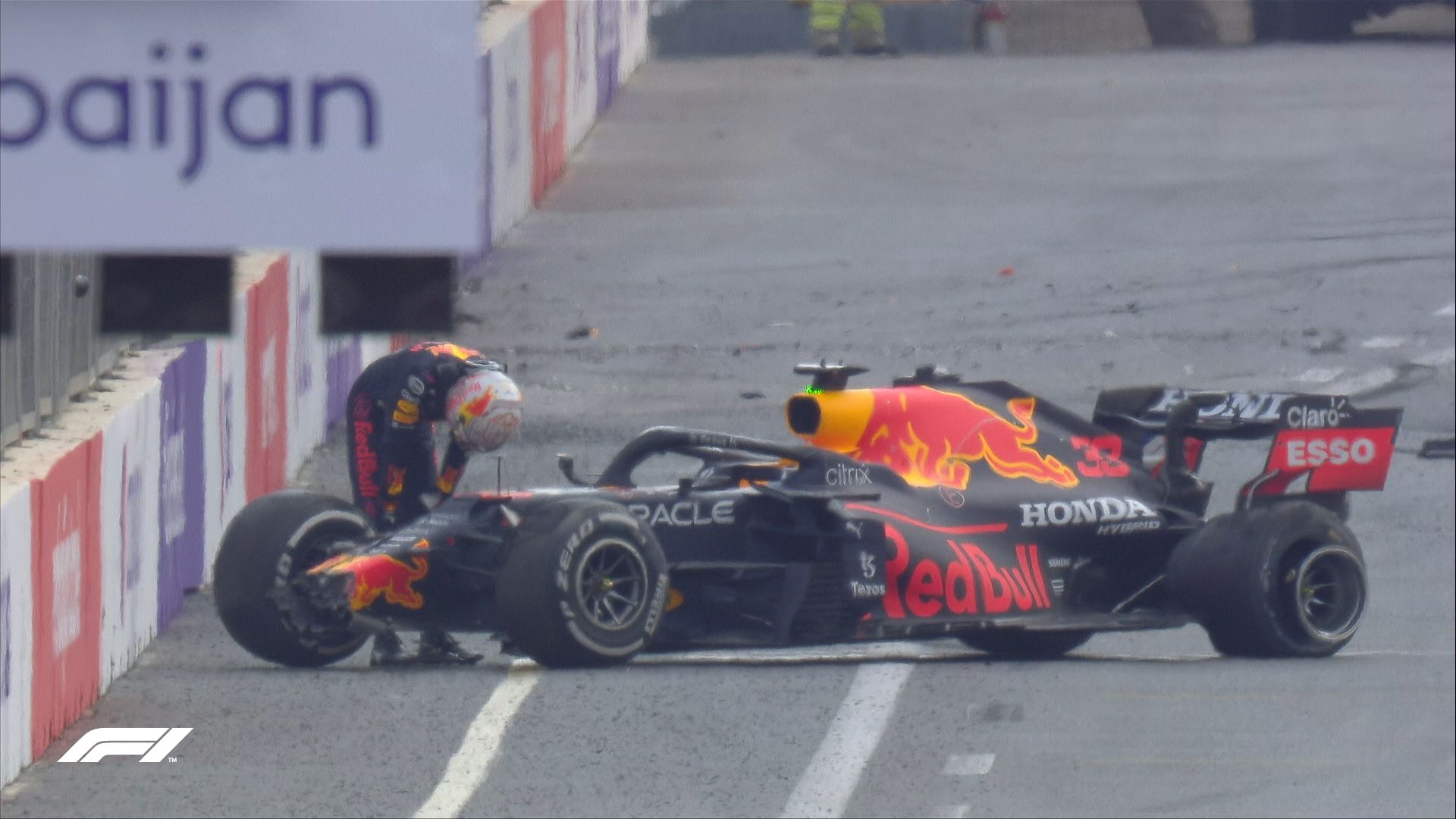 Max Verstappen and Lance Stroll reflected on their sudden tyre failure in F1 Azerbaijan GP, as Pirelli shares their initial thoughts on the issue.

After a relatively sedate F1 Azerbaijan GP in the first half, the second half saw double-trouble, with Aston Martin’s Stroll being the first victim of a left-rear tyre failure on the lead-up to the main straight, without any warning of a problem.

There was no immediate danger as Pirelli did not send any warnings of a problem. However, with less than 10 laps to go, Red Bull’s Verstappen had a similar failure on the same straight, but little closer to the start/finish line – again without any warning.

Stroll crashed on the left-side wall, while Verstappen did so on the right side. Both drivers had a heavy impact, with the latter having to take a trip to the medical center too. It was a massive disappointment for the Dutchman, especially having lost crucial points.

Post-race, both Stroll and Verstappen were a clueless about the happenings. While the Canadian didn’t say much, the Dutchman noted that it will be mostly Pirelli stating about debris, etc, for the failure. He added that he was not pushing hugely when it failed.

Here’s what both said:

Verstappen: “I mean watch the tyres, it is about just tyre management. I didn’t feel anything up until the moment that I suddenly went to the right, the tyre just blew off the rim and it’s not a nice impact to have, it’s quite a dangerous place to have a tyre blowout at that speed. But luckily all fine with me, the car not so much. You’ll never get the straight answer on the tyre failure. It’s a tough one, because it was an easy race.

“We led comfortably and we controlled the speed over the others. I tried to match the others and before the SC the gap was starting to get bigger, despite the fact I wasn’t really pushing on that tyres and you can say that it’s because of the crash of Stroll and the other line we take. Everyone takes that line every lap, so at one moment you have to think the debris is gone there.

“I don’t think that’s the case, although Pirelli will say it was the case. It for sure is very dangerous. [In case of a crash] it’s possible to turn left as well and the wall was in a different angle there. I think I went like 305 km/h. I expect of course they will say it’s debris, but we already did quite a few laps and everyone is taking the same line. So at one point I don’t think there is debris anymore. But probably they will blame it on that. At the end of the day, it doesn’t matter, these things shouldn’t happen.

“I had to go to the medical centre, but I couldn’t get there so I had to do a long route. When I was laying on that bed, they were checking my blood pressure and my phone was vibrating a lot, so I was saying, ‘What’s going on?’ Because I could hear the cars of course, and then I was done and I was allowed to leave and I saw my phone and Lewis had a problem in Turn 1. My blood pressure was even with those text messages absolutely fine.”

Stroll: “I am frustrated not to finish the race, but I am OK. We were on course to score good points by running much longer before the pit stops and overcutting a lot of cars. That proved it was the right call to start on the hard tyres because we had good pace throughout the first stint and the race was coming to us. I am not sure what happened to cause me to spin on the straight because there was no sign of any issues, so we need to investigate. It has been a challenging weekend for me.”

As Verstappen suspected, the initial statement from Pirelli hinted towards debris, as they didn’t find any wear on the tyre for it to go away like that. When to speaking to media – including FormulaRapida.net – Mario Isola stated that the tyres will be taken to Milan for full investigation, along with some other sets, which had small cuts.

Isola revealed about a 6-7cm cut on Mercedes’ Lewis Hamilton tyre under red flag. He, in fact, showed us an image of a cut on the edge of his tyre. The sudden failure is a cause of worry, naturally, but he felt there were many drivers, who did about 35 laps on the compound and did not face much trouble, especially on the wear side.

Isola: “Obviously we didn’t have the time to perform a full investigation and we need to send the tyres back to Milan. The plan is to send them by air freight to Milan on Monday and make an investigation in our laboratories, on this set, plus some other sets used in the same stint. Looking at the tyres used in the second stint, for most of the drivers we didn’t find any evidence, or anything. I believe I can exclude that failures were due to tyre wear, because it is not a matter of tyre wear.

“There was no sign, or any warning, according to the teams. We have to receive the telemetry from them, but they told me there was no warning, no vibration, nothing to think there could be something in the tyres. These are the main element collected in this short period of time. Consider that the tyres fitted on the cars that crashed were back in the garage and in our fitting area just minutes ago, so we need a bit of time to analyse them. I don’t want to give any preliminary conclusion.

“It seems it is a cut due to debris. It is not more stressed tyre, we have evidence of another cut in the same position. Both the accidents happened on more or less the same part of the circuit and a few laps difference we have other cars with the same number of laps, same tyres, without any issues. So the preliminary investigation is that it is probably due to an external factor or debris or a kerb or whatever. Now the plan is to make a thorough investigation now and come back with a report to the FIA and the teams that hopefully will be before Paul Ricard. I will push to have a report as a priority.”

Debris for Verstappen from Stroll, but for the Canadian –

Isola: “For Max, it could be debris from Lance’s car. For Lance, honestly I don’t know because there were no incidents before his crash. I cannot exclude that there was something on track. In 2018, Bottas picked up a big piece of debris on the main straight and he had a sudden deflation. In that case, it was visible from the images and we could see clearly what cut the tyre. In this case, it’s a bit more complicated. Another element of our investigation is if there are any images or footage that we can use to better understand what happened.”

Isola: “We found a cut on the inside shoulder of a tyre of rear left tyre used by Hamilton in the same stint, the cut was quite deep and big, and probably 6-7 cm, but not cutting the construction, so the tyre was still in one piece, just the tread is cut, and when there was the red flag and Lewis came to the pit lane and changed the tyres we were able to find the cut. Luckily, this cut was not cutting the construction. And that’s why he didn’t lose pressure. So we have evidence of another tyre with a cut. The other tyres that have been used during the same thing for 30, 32, 33 laps are not showing any evidence of a potential problem. This is what I know at the moment.”