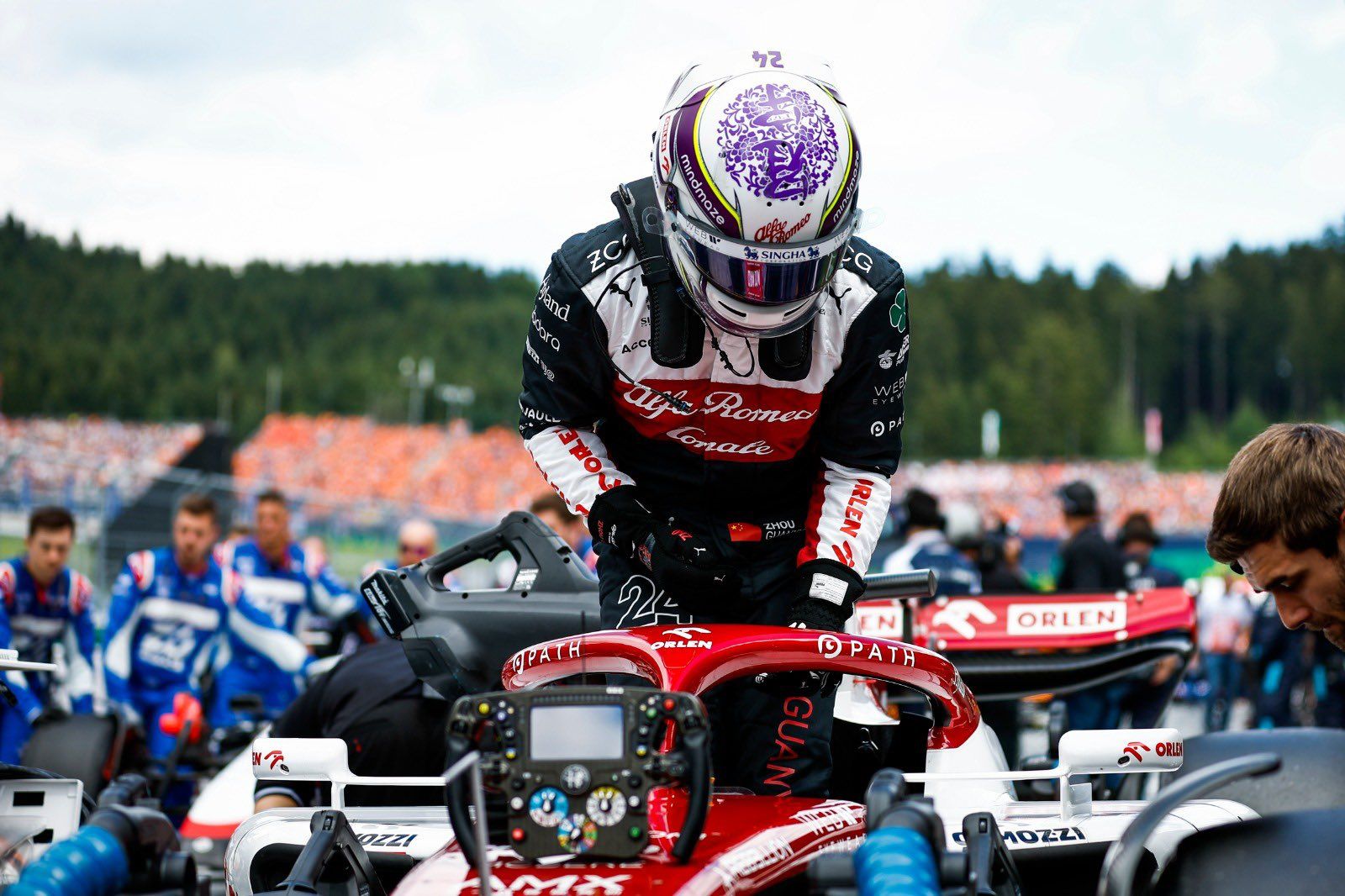 Frederic Vasseur has praise for Zhou Guanyu especially for his attitude post the Silverstone crash, as he has good words for Alfa Romeo mechanics too.

It’s been a complex time for Zhou, especially two weeks on from the crash in Silverstone and one week on from Austrian GP. The crash had everyone fearing the worst considering the visuals and the damage sustained on the car.

However, Grand Prix drivers are a hardy bunch. Crashes are part and parcel of it and no  matter what, drivers must put accidents to the back of their mind and get on with the job. When Guanyu crashed at turn one in Silverstone, he had some bumps and bruises but was released from the medical centre soon after.

He knows he was lucky but it was his attitude when he returned to the track which is most impressive as team boss Vasseur alluded to. Not long after the crash, Guanyu was back in the box and already thinking about the weekend in Austria.

“I think that he came back to the garage, one hour after the crash when he was released from the medical centre and he had absolutely nothing,” recalled Vasseur. “First question was about the stock of parts for Spielberg. For sure that if, a couple of days after, when you think about this, that you suggested incredible to have a so huge crash and to come back into the garage to have nothing, to be focused on the next one, it’s unbelievable”.

It is testament to Guanyu, of course it was a big crash and he could perhaps be forgiven for it playing on his mind but once more, this is not how a drivers mental capabilities work. What is most impressive is the way he thought and how he bounced back in Austria. This is what separates drivers from the fan in the paddock.

In a nutshell, yes, Guanyu was disappointed at his British GP outcome but, he had parked it, forgotten about it and turned his attention to the next opportunity. It is this attitude that Vasseur found most impressive in his Chinese charge and could perhaps go some way to confirming a 2023 contract perhaps.

The team boss was not only praise for Guanyu, but also Alfa Romeo mechanics who had to work extra hard. It was a massive headache because of a week turnover between Silverstone and Red Bull Ring. But then again, that is a how team personnel earn their salaries and sometimes it’s the hard way, dealing with an incident the like of which presents a huge challenge for any of the teams on the grid.

A lot of dedication goes into every role in a Grand Prix team which is itself an understatement. The focal issue really though was the way how Guanyu would react less than a week after the crash. “For sure it was not just to repaint the car,” said Vasseur. “No, it was massive. But we are ready to do this kind of exercise, to build up a new car.

“And sometimes it’s even planned to do it between two races to change the chassis. It was for sure a big task but at the end of the day they are prepared to do it and it was not,” summed up Vasseur.