Stoffel Vandoorne was the fastest man on the qualifying session today in Spa-Francorchamps. Championship leader Jolyon Palmer was second followed by Evans and Marciello. Nasr was only 11th.

Cecotto started leading the session, but the other drivers were quickly ahead of him. Palmer set the pace followed by Vandoorne and Richelmi. Julián Leal was coming on a very fast lap but found yellow flags in the last sector caused by Izawa. Most drivers went back to the pits as the times were not improving.

Halfway through the session, Palmer led ahead of Marciello, Cecotto, Vandoorne and Leal.

With 5 minutes left, times started to improve. Leal went 4th although his teammate Felipe Nasr got in his way. Palmer thought he had the pole in his pocket and pitted 3 minutes before the end of the session, but Stoffel Vandoorne improved his time and got the pole just by 0,018s. Mitch Evans also improved and went 3rd. 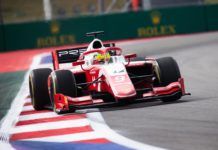