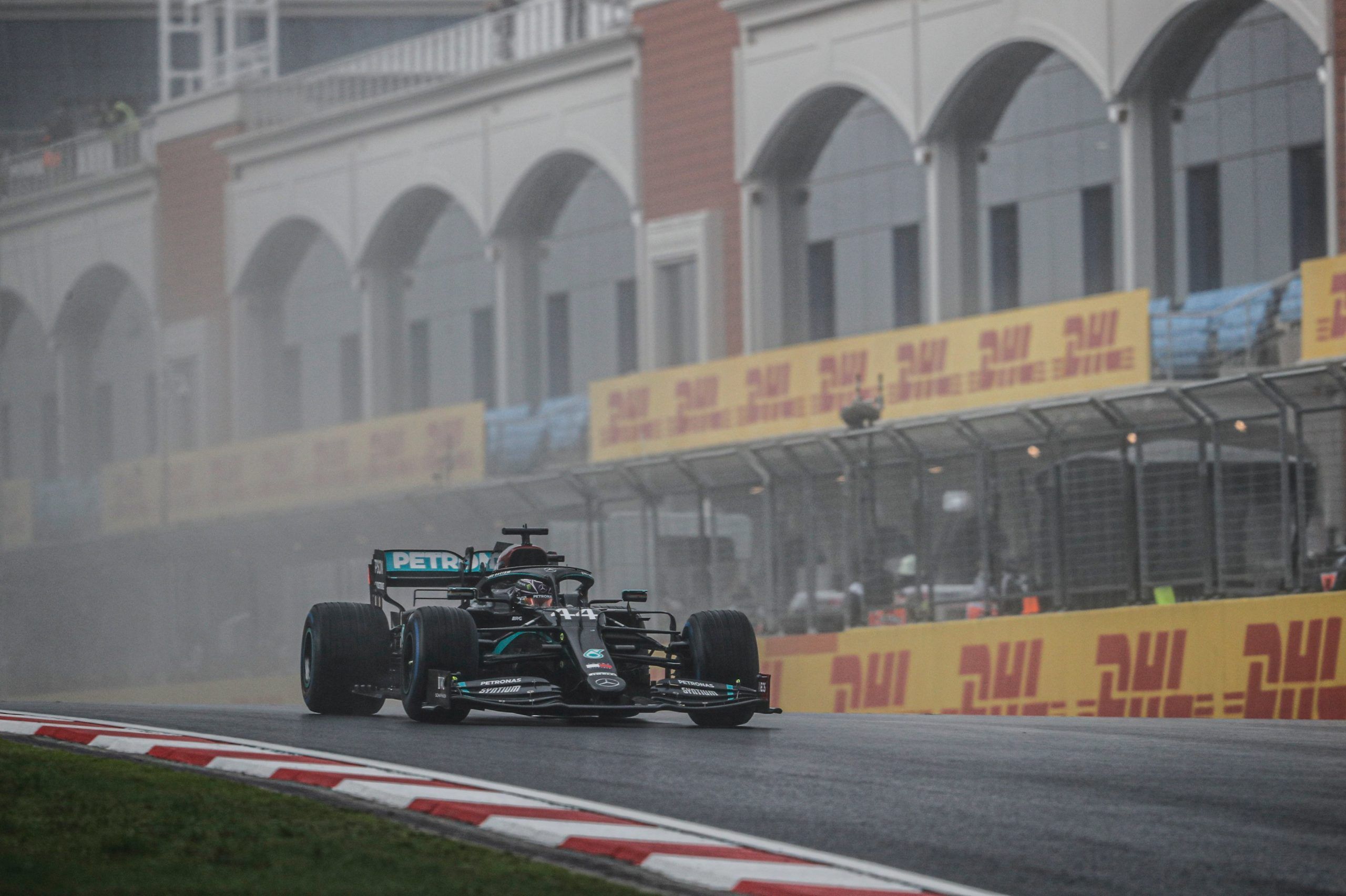 Mercedes’ Lewis Hamilton not only won the Turkish GP but also his seventh F1 world title ahead of Racing Point’s Sergio Perez and Ferrari’s Sebastian Vettel.

Even before the start of F1 Turkish GP at Intercity Istanbul Park, it was chaos on reconnaissance lap for some as Alfa Romeo Racing’s Antonio Giovinazzi and Williams’ George Russell had crashes – the former on track, the latter at pit entry.

The Italian had to be craned out of the gravel as he made it onto the grid where Alfa Romeo fixed his car. Russell, meanwhile, stayed in the pits for a pitlane start along with Williams’ teammate Nicholas Latifi – a strategic move to change its set-up.

AlphaTauri’s Pierre Gasly was forced to start from the back of the grid after team worked its on car last night under parc ferme conditions. The F1 Turkish GP start, though, was a good one for Racing Point as Lance Stroll led the way from Sergio Perez in a 1-2.

Mercedes’ Lewis Hamilton jumped up to third with Ferrari’s Sebastian Vettel up to fourth after starting from outside the Top 10. The Red Bull duo were slow but, as Max Verstappen was fifth from Alexander Albon and Renault’s Daniel Ricciardo.

His teammate, Esteban Ocon, though was tagged by the Australian himself at Turn 1 into a spin. Mercedes’ Valtteri Bottas tried to avoid him but spun as well – as both drop to the back of the grid. Replays showed them spinning again at Turn 11 on the same lap.

The Top 10 was rounded out by Alfa Romeo Racing’s Kimi Raikkonen, McLaren’s Carlos Sainz and Haas’ Kevin Magnussen. As Stroll and Perez led the way, Verstappen found a way past Vettel to get back into his groove in the chase of Racing Point.

Ferrari took the gamble to pit Charles Leclerc first on Lap 7, which started the chain of events, where Red Bull was the last. Stroll and Perez continued to lead the way as Verstappen slotted himself in third ahead of Vettel and Hamilton.

Albon lost out in sixth but the Thai racer first passed Hamilton, when the Brit tried to clear Vettel in the final corner. Having passed the Mercedes driver, the Red Bull driver was quick to clear the German as well to be fourth and catching Verstappen.

His teammate tried hard to clear Perez but spun in the right-hander. He was forced to pit due to a flatspot as to add to his misery, he was put under investigation for crossing the white line on pit exit during his first stop – as shown in TV replays.

He rejoined in eighth as Albon started to hurry Perez and even Stroll in the fight for not only a podium but also a win in F1 Turkish GP. Vettel, behind, managed to keep off Hamilton as Ricciardo and Sainz were sixth and seventh on their own.

Then came Verstappen ahead of Leclerc and Magnussen, who had a train of cars behind him. In fact, this pushed Bottas into a big fight where he had a moment again when trying to pass a rival, to drop down the Top 10 fight, in 17th.

As the race progressed, the Top 3 started to struggle on tyres but Stroll continued to lead Perez and Albon. The Thai race complained of fronts troubling him as he spun at Turn 1 to drop behind Hamilton, Verstappen and Vettel after all the hard work done.

Hamilton was up to third then with Verstappen and Vettel behind. With Stroll pitting, it handed Perez the lead but not for long as the Mercedes driver made quick work of him to lead the F1 Turkish GP with Verstappen, Stroll, Vettel, Albon and Leclerc behind.

After the earlier VSC for Alfa Romeo’s Antonio Giovinazzi, there was another incident for Haas’ Magnussen, who stopped at the pit exit. He was pushed back onto his box and rejoined the race as Latifi, Haas’ Romain Grosjean and Bottas had more spins.

At the front, Hamilton continued to lead from Perez and Verstappen as the Ferrari duo were alive with Leclerc passing three drivers to be fourth ahead of Vettel and Albon. The biggest to lose from this was Stroll, who dropped to eighth after Sainz passed him too.

In fact, Sainz managed to clear Albon too as a late stop for Verstappen, put him behind his teammate in seventh. Stroll was nowhere in eighth as a moment from Ricciardo in the final corner allowed Norris through in ninth, with the Australian dropping to 10th.

Replays showed a moment for Leclerc as well in third, which dropped him a bit far off Perez and allowed Vettel to get closer to the Monegasque. There were more spins as Verstappen spun behind Albon when Giovinazzi also spun just at the side of them.

At the front, it was extraordinary for Hamilton and Perez as the two did not stop for the second time and kept their tyres alive in tricky conditions to finish 1-2 as the Brit not only won the Turkish GP but sealed the 2020 F1 drivers’ championship.

By doing so, he matched Michael Schumacher to have seven F1 world titles, as Perez came home in second despite a scramble on the final lap when Leclerc passed him at Turn 9 but himself locked-up to lose out, not only to the Mexican but also Vettel.

The German rounded out the podium position with Leclerc and Sainz just behind. The Red Bull lost pace totally with Verstappen only sixth ahead of Albon, while Norris was seventh with the fastest lap point, as Stroll and Ricciardo rounded the Top 10.

Missing out on points was Ocon with AlphaTauri’s Daniil Kvyat in 12th, Pierre Gasly 13th, while Bottas was only 14th from Raikkonen and Russell – all of them one lap down on the leaders. DNF: Magnussen, Grosjean, Latifi, Giovinazzi.

UPDATE: The stewards cleared both Verstappen and Magnussen for the white line and unsafe release incidents.