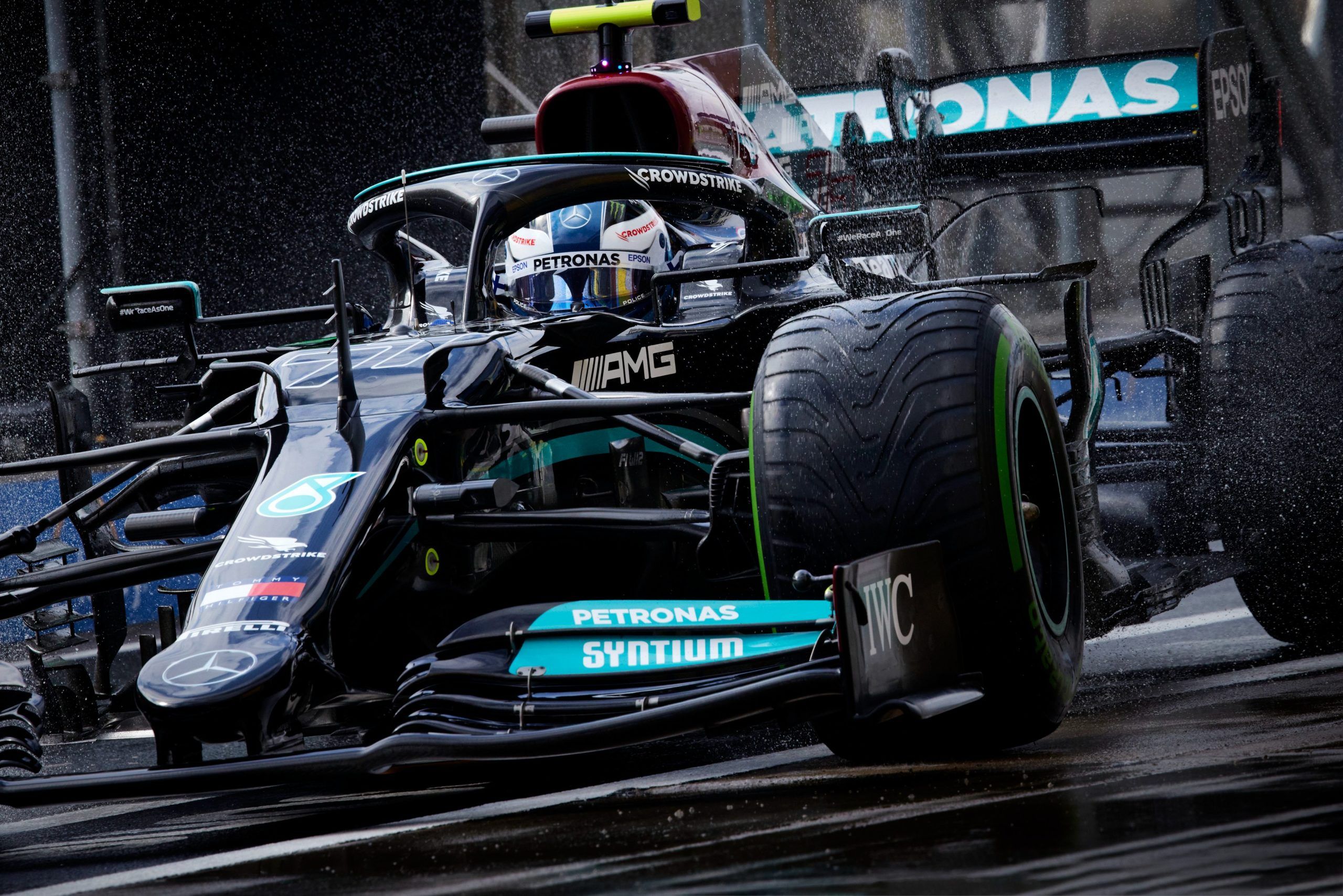 What was predicted to be a dry F1 Turkish GP, it was a wet start with the whole field starting on the intermediate tyres, throwing out any strategy game. Pole-sitter Valtteri Bottas made a good start in his Mercedes to lead from Red Bull’s Max Verstappen.

Ferrari’s Charles Leclerc was third from Red Bull’s Sergio Perez, who cleared AlphaTauri’s Pierre Gasly after he got sandwiched with Alpine’s Fernando Alonso on the outside. The Spaniard was spun around at Turn 1, who dropped to the back of the pack.

There were some more spins at the back with Williams’ Nicholas Latifi and Haas’ Mick Schumacher having separate ones. Replays for the latter showed that the German was spun around by Alonso, when he tried to take the inside line.

He was handed a 5s time penalty for causing a collision, which was same as Gasly. While it was steady at the front, Ferrari’s Carlos Sainz was the biggest mover after he made it inside the Top 10 from the back of the grid. He was flying in the tricky conditions.

He managed to pass most at ease, with only slight trouble against Vettel. The German gave him all the room, but the Spaniard couldn’t stop the car on time. While Sainz made all the places, it wasn’t the same for McLaren’s Daniel Ricciardo, who was stuck in 16th.

As Bottas comfortably led Verstappen, Leclerc and Perez, the Mexican soon had Hamilton in his mirrors after the Brit cleared five cars to be fifth. He had troubles passing Tsunoda, but he went around the outside and passed him to then clear others one by one.

Gasly hung on to sixth with Norris seventh from Stroll, Sainz and Tsunoda in the Top 10. But the Japanese couldn’t hold for long as he spun at Turn 9, which dropped him to 13th, allowing Vettel to be 10th defending from Ocon.

At the front, Bottas continued to lead the way from Verstappen and Leclerc in the Top 3, as Perez steadied in fourth being chased closely by Hamilton. The two had quite the wheel-to-wheel fight but the Mexican managed to stay ahead despite being pushed wide.

The pit game then kicked-off with a lot of them switching to a second set of intermediate tyres, which included the likes of Bottas, Verstappen and Perez, but Leclerc and Hamilton stayed out longer. There a gamble from Vettel to switch onto the medium tyres.

It didn’t work certainly as after multiple offs, which included one at pit entry, he switched to the intermediate compound. It was Leclerc leading F1 Turkish GP from Bottas and Verstappen, as Hamilton was fourth from Perez, Gasly and Norris.

Ocon was eighth having not stopped as Sainz was ninth after a slow stop, with Stroll rounding out the Top 10. The deliberations at Ferrari and Mercedes continued about Leclerc and Hamilton pitting, but both thought to finish the race on the same intermediate tyres.

But the multiple lock-ups for Leclerc made it impossible for him to hang on, as Bottas caught him and passed him to retake the F1 Turkish GP lead. The Monegasque pitted eventually to drop to fourth behind Hamilton, but ahead of Perez.

The Mexican eventually got the place to be third after Hamilton eventually pitted to drop back to fifth, leaving only Ocon to pit. Like everyone else, the Brit had a graining period on the new sets of inters, which allowed Gasly and Norris to catch up.

At the front, Bottas only made it sweeter with a fastest lap to register his first F1 win of 2021 in Turkish GP, as he led Verstappen by 14.584s in a fine show. Perez made it two Red Bull cars on the podium as Leclerc was fourth from Hamilton in the Top 5.

Gasly ended up sixth from Norris, Sainz, Stroll and Ocon in the Top 10, whereby the Frenchman did the whole of F1 Turkish GP without pitting and took a point. He was almost overtaken by Alfa Romeo’s Antonio Giovinazzi, who was over four seconds quicker.

Everyone from Ocon until the last ended up a lap down, while the two Haas drivers ended up two laps down.