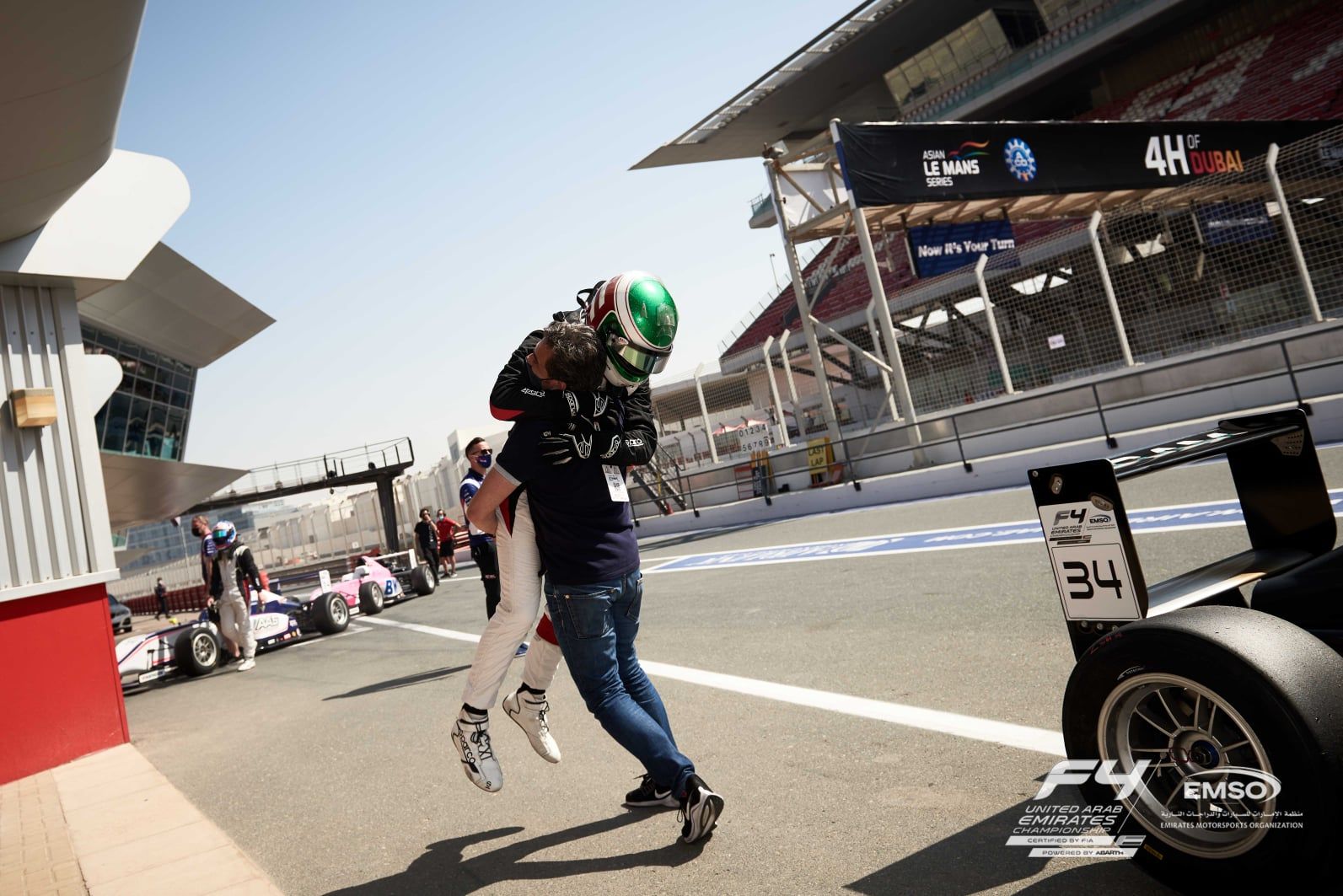 Enzo Trulli took the 2021 F4 UAE title in the final round of the championship, as Mick Schumacher reflects on most intense career moment in F2.

The 2021 F4 UAE season ended in style after Cram Durango’s Trulli – son of ex-F1 racer Jarno – took the championship by just the one point over Xcel Motorsport’s Dilano van’t Hoff. The Italian managed to beat his Dutch rival after an intense fight.

Hoff started the year in a dominant fashion, but Trulli and Xcel Motorsport’s Kirill Smal stayed with him in the title hunt all-through. A series of wins for the Dutchman gave him a nice buffer, but the Italian was thereabouts with several podiums finishes.

It slowly headed towards a two-way fight, which was eventually decided in the final round at Dubai Autodrome. Hoff had the lead of two points going into the final race, but with Trulli finishing third and the Dutchman in fourth, the former won it by one point.

With the title in the bags, Trulli will now look ahead to his main programme of 2021 in Spanish F4, where he will race for FA Racing by Drivex (Fernando Alonso’s team), with Van’t Hoff to compete in the same championship for MP Motorsport.

“Formula 4 UAE has been a fantastic experience,” said Trulli. “Being able to practice and race so much, against high level opponents was the spark that pushed me to find my limits and to improve myself, day after day. This year, the competitive level of my challengers was very high and I am sure that they will all be successful in the various national championship they will compete in.”

Here’s news on the 2021 programme for Enzo Trulli

Staying on the news about second generation driver, Schumacher took time to reflect on the intense moment of his career, when he won the F2 championship in Bahrain. Having had a slow start, the German caught on well, as title rivals started to struggle.

Despite having points in his bag, Schumacher had some troubles towards the end of the year, which allowed the likes of Callum Ilott and Yuki Tsunoda to catch up, but it was enough in the end for Michael’s son to hang on and secure his second world title after F3.

“Even though I knew I was going to race in Formula 1, I absolutely wanted to win the title, which is normal isn’t it? You race, you want to win,” started Schumacher. “I never lost the belief I could do it. Even if the last few races didn’t go as I’d have liked, I really wanted to be champion, for me and for the team.

“When I crossed the line at the end of the last race, in all sincerity I was not at all sure I had done it and part of me didn’t dare celebrate. Probably, these were the most intense moments of my career, to the extent that I when I got to parc ferme and saw the team cheering, I needed a few moments to realise what had happened.

“Looking at the season, there wasn’t one moment in particular. The truth is that after the bad start, we didn’t lose heart because we knew we had worked well with my team Prema. We never lost faith in the idea that we could win and that’s what happened.

“We concentrated and stayed united, working hard to make up ground step by step. Commitment, self confidence, team work and enjoyment were the factors that saw us work our way back up the order and in the end win the title, thanks mainly to consistent results,” summed up Schumacher, as he now looks ahead to his debut F1 season with Haas.