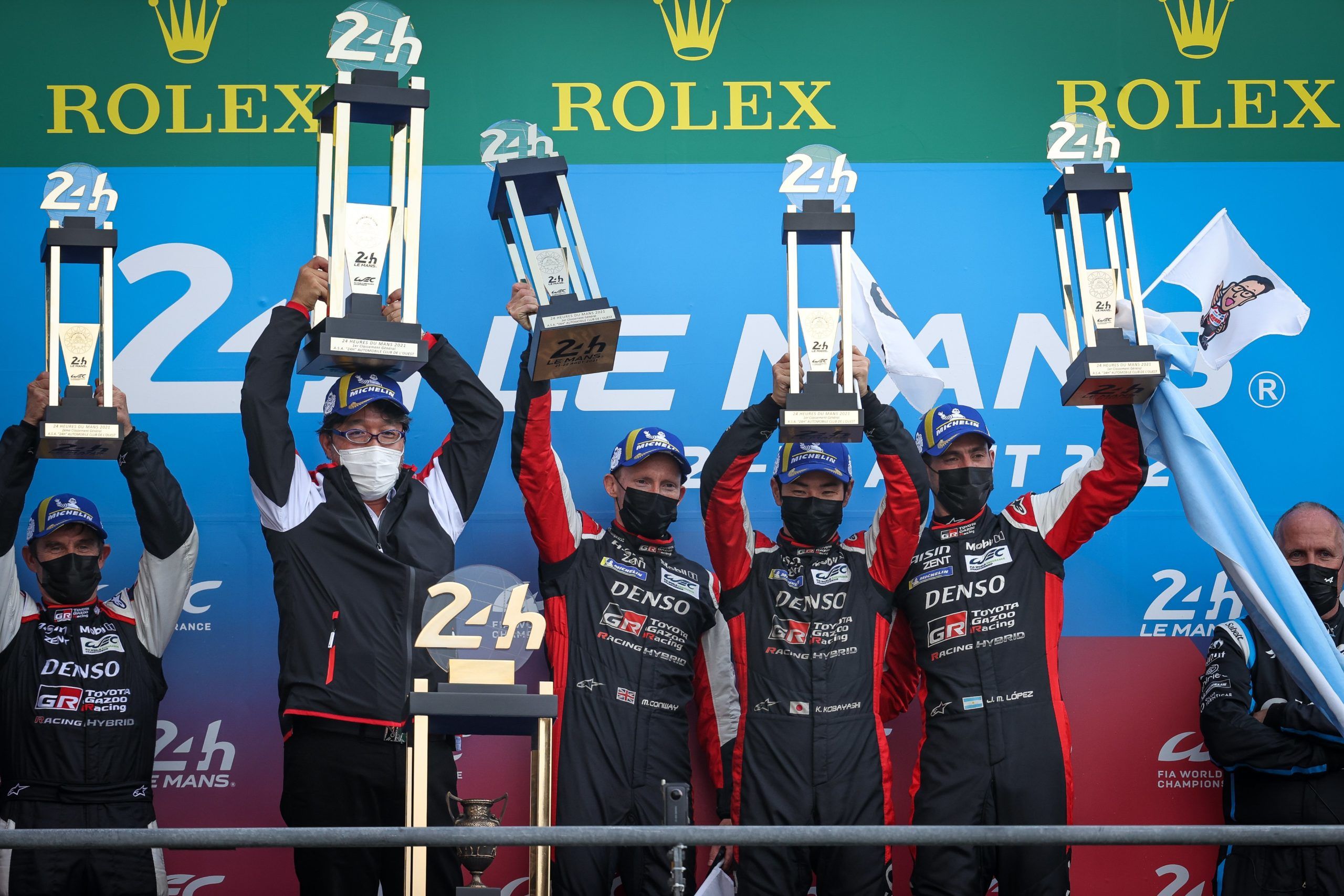 It was a long time coming for the #7 Toyota crew of Conway, Lopez and Kobayashi. The trio have seen the sister #8 soak up Le Mans 24 Hours wins in the previous editions, but it was finally their time to shine last weekend, to finally break the jinx.

The #7 Toyota led from the start to finish to beat sister #8, which dropped to back on Lap 1 after a hit from the rival. It fought back up to second amid mixed conditions. The car also developed a fuel system issue, which later on affected the lead car too.

It was a hectic end to the race, even though the two Toyota Hypercars had enough gap to third-placed Alpine. The worry was for a late retirement, something which has happened to them in the past, but this time, #7 and #8 had enough luck to see it through.

Team founder Toyoda penned his thoughts as he does after every Le Mans 24 Hours. “To Kamui, Mike and Jose, You have finally taken the “missing item at Le Mans”,” he started. “Congratulations! It is great to see! Even if Toyota had three consecutive wins at Le Mans, Even if you guys won the world championship, I couldn’t rejoice from the bottom of my heart. Because your guys felt only frustration at Le Mans.

“It’s not your fault as drivers, Our team and cars were not strong enough. So when I talk to you, I’ve always been full of regrets. But you guys never blamed anyone. How do you get rid of mistakes? How can we all get stronger? Think only about that and fight to win. The #7 crew finally got to the end of 24 hours and took the checkered flag on the highest step of the podium, and had a champagne fight with a heartfelt smile.

“I could finally see it, I was so happy and relieved that I could nearly cry. Huge congratulations! Thank you so much! I was watching Kamui when he popped the champagne cork without any trouble -just a bit too quickly! Maybe he was worried he would forget. I’m really glad that I was able to deliver a winning car.

“To Kazuki, Seb, Brendon. I think second place is a disappointing result for you, however thank you for the one-two finish. I heard that Seb helped solve the trouble on car 8, then joined car 8 driver to help car 7. Thank you to all the drivers of car 8! But the trouble is the same that happened in the previous race, at Monza. I am really sorry to let you compete at Le Mans without fixing it.

“We should give drivers a car which gives them more peace of mind and can be comfortably driven. We have to continue to improve and create ever-better cars. I heard it was announced that 100% renewable fuel would be introduced in the WEC next season. I appreciate those who are committed to the development of new fuels, making this decision, so I would like to pay tribute to you.

“We are moving towards carbon neutrality through motorsport and we can make an effort to expand the options. We believe that we can speed up technological development through motorsport, because it is a place for serious competition. A car that is easy for the driver to drive. A fascinating race that will keep fans excited. We will continue our efforts for various technological developments in motorsport. To the fans, Thank you for your support this time as well. I would be grateful if you could continue to support us in the future. Thank you.”

For all the three Toyota drivers – Conway, Lopez and Kobayashi – it was their first ever Le Mans 24 Hours victory, bettering their previous best of second place. Naturally, they were overjoyed to finally get on the top step after years of toil.

“It was a hard race,” said Conway. “We knew we had an issue on the car for the last six hours and that could have been a really big problem, but the team came up with a solution to keep us going. All credit to them for getting a one-two finish. It is really special in the circumstances. This race is never easy.

“Even if you are out on your own at the front, anything can happen. I want to thank my team-mates for their mega stints and hard work all the time, plus the team in Cologne and Japan for their support and hard work that made this possible. We can enjoy it now because a weight is lifted off us.”

Meanwhile, Kobayashi, stated: “It is an amazing feeling to be here as a Le Mans winner. We had to go through so many experiences over the years, some of them very difficult, to get here. I always knew Le Mans requires luck to win and we needed some luck today as well. We had to do a special procedure just to keep the running.

“We did the maximum we could do to survive for the last seven hours; it was an almost impossible job. Normally the race would end there for us but somehow we survived because the team worked really hard and made the right call. My team-mates, car crew and engineers did a great job during the week. Thank you to everyone.”

And finally, Lopez added: “The last Le Mans races were quite tough for us as a crew and to finally win this race is a dream come true. It is simply amazing. We came so far for so many years but, up to now, we couldn’t win Le Mans. All those experiences make the victory even more special.

“Mike and Kamui are like brothers to me and I have seen them doing things in the car which are just amazing. Of course there is a strong team behind us in Japan and Cologne. We take the glory but we couldn’t do this without this team. Thanks to all of you.”